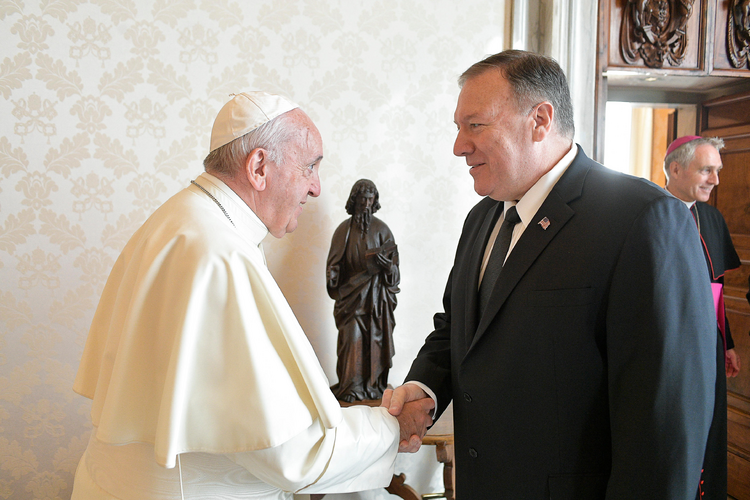 The U.S. secretary of state, Mike Pompeo, speaking at a symposium in the Vatican on human dignity on Oct. 2, said, “We must recognize the roots of religious repression. Authoritarian regimes and autocrats will never accept a power higher than their own. And that causes all sorts of assaults on human dignity. We must exercise our moral voice to confront them.”

His audience included Vatican officials and ambassadors to the Holy See from many countries, including Callista Gingrich from the United States, gathered in the old synod hall of the Vatican. He told them that “the Holy See and the United States have had our differences over the years. Good people can disagree. But on the issues most fundamental, on the issues of human dignity and religious freedom, these issues that transcend everyday politics, on the enduring struggle of the individual’s right to believe and worship, we must—and I know we will—march together.”

It was significant that Mr. Pompeo chose to open and close his speech by referring to the repression of religion in China, at this meeting co-sponsored by the U.S. State Department and the Vatican’s Section for Relations with States of the Secretariat of State to celebrate the 35th anniversary of the establishment of diplomatic relations between the United States and the Holy See.

It is no secret that the United States was opposed to the signing of the provisional agreement between the Holy See and China on the nomination of bishops on Sept. 22, 2018. It made this abundantly clear to the Vatican prior to that historic event, as Archbishop Paul Gallagher, the Secretary for Relations with States, who was sitting beside Mr. Pompeo at the symposium, knows well.

Pompeo: “More than 80 percent of mankind lives in places where religious freedom is threatened or entirely denied and it’s no coincidence that it has happened as unfree societies have proliferated.”

That could be one of the reasons why Mr. Pompeo said, “Good people can disagree” and why later he “humbly” asked the Holy See to join the International Religious Freedom Alliance, “the first multilateral organization, multilateral body of its kind.” The United States launched the alliance last July with the aim of making it “the premier body in the world for advancing the issues of religious freedom.” Indeed, he asked, “what could be more powerful than our voices all together, calling for the freedom to worship God?”

Mr. Pompeo opened his speech at this symposium with a reference to the violations of religious freedom in China by recalling that in September at a gathering in New York, organized by the U.S. State Department and co-sponsored by Canada, Germany, the Netherlands, and the United Kingdom, “three ethnic Uighurs took the stage…. One of them was a woman named Zumrat Dawut.”

He used her story to highlight religious repression in China and recalled that in April 2018, “Mrs. Dawut—a 30-something, mother of three—was summoned to the local police station in Xinjiang, China. She was shackled, interrogated and taken to an internment camp, where she was forced to recite Chinese propaganda and beaten for giving an ailing fellow prisoner her food.

“She was injected with unknown drugs,” the secretary of state said. “All of this for the crime of being Muslim. For worshipping her God. For exercising her conscience.” He added that before her release “she was forced to renounce her faith and promise not to speak about what had happened to her. Chinese officials monitored her family and forced them to eat pork.”

He said Mrs. Dawut “was one of the lucky ones, but she wasn’t alone. God was with her. And America was with her, too. It’s what we do, and it’s who we are.”

He went on to point out that “more than 80 percent of mankind lives in places where religious freedom is threatened or entirely denied.” Moreover, he said, some 71 million people around the world “are displaced as refugees” and “roughly 25 million people are caught in human trafficking,” adding that “it’s no coincidence that it has happened as unfree societies have proliferated.”

Brownback said, “We’re here to build a stronger partnership with the Vatican on religious freedom.”

“When the state rules absolutely, God becomes an absolute threat to authority,” Mr. Pompeo said. He mentioned offenses against human dignity and religious freedom in other countries, including Cuba, Syria, Iran and Myanmar, and then returned to China, which “has put more than a million Uighur Muslims—Muslims like Mrs. Dawut—in internment camps” and also thrown Christian pastors in jail.

He called on the Holy See and other nations present to join the United States in the push for religious freedom, saying, “We must exercise our moral voice to confront them.”

Archbishop Gallagher in his speech touched equally on all three topics of the conference: the advancement of the fundamental right to religious freedom, combating the scourge of human trafficking and providing humanitarian assistance to the vulnerable and abused. Referring to religious freedom, he reminded his audience, “I am of the opinion that the principal emphasis with regard to religious freedom should not be political or ideological. The main concern should be to protect human rights and fundamental freedoms effectively, and to promote peaceful coexistence and inclusive societies, in which people can express their beliefs freely without fear of being censored by the common discourse and where minorities are fully respected.”

The archbishop and Mr. Pompeo left the symposium after delivering their speeches. Mr. Pompeo was received in a private audience by Pope Francis the following morning.

Another speaker, Sam Brownback, the U.S. ambassador at large for international religious freedom, also used tough words about repression of religion in China, when he spoke to journalists after delivering his speech.

He said the United States has been calling on the Chinese government “to move away from this war on faith, all faiths” and said, “We’re going to keep pushing them on it.” China is not only going against the United Nations standards on religious freedom, he said, but also “against its own constitution.” He confirmed that the United States is encouraging businesses to invest in countries “where they don’t have religious repression.”

Mr. Brownback said, “It’s not good for China to have a million Muslims in concentration; it is bad for them and I think they are feeling the pressure.” He recalled that China was “moving to a more open society prior to Xi Jinping and had pretty open faith communities operating in the country,” but not so today. “It’s trending all wrong.”

Asked about the significance of Mr. Pompeo’s focus on China’s persecution of religion in his speech, Mr. Brownback said, “we are deeply concerned about what China is doing, and for me it’s a top issue because it is very repressive and, second, they are using new technologies in the oppression.

“We believe in many respects that the future oppression is not going to be people in jail but more people of faith marginalized in society. So you have a facial recognition system, a social credit score,” he said, using the example of a Chinese citizen who attends a mosque and then has “problems in getting an apartment, traveling, going to schools.

“You’re ‘free,’” he said, “but you are not free because you cannot operate in society.” Moreover, he said, “that system is starting to be exported to other autocratic repressive regimes,” adding, “That’s the thing we really want to head off.”

Asked if he would like to see Pope Francis and the Vatican more outspoken about the repression of religion in China, Mr. Brownback said, “We’re here to build a stronger partnership with the Vatican on religious freedom.

“We don’t agree about everything, but on these three topics,” he said, alluding to religious freedom, human trafficking and humanitarian assistance, “we very much agree.”

He added, “We want to build a much stronger partnership, more vibrant, more specific, more action-oriented in these three areas. There is a lot of room to run there and a lot of commonality of interest.”

He said U.S. officials had come to the Vatican “to enhance cooperation” and, citing the example—also used by Mr. Pompeo—of how Pope John Paul II and Ronald Reagan worked together during the Cold War, he said, “When the Vatican and the United States really cooperate on a topic, [they] can move heaven and earth.”

May I humbly suggest that religious conformity is also a bastardized version of religious oppression. In fact, any attempts by any religious groups to conform governmental laws to their specific beliefs actually succeed in religious oppression for those who do not believe as such. It’s a delicate balance to be sure, viz. vaccinations. It’s not easily resolved, maybe never so.

Pompous Pompeo is the last person on earth whose ideas on this topic of religious freedom that I would entertain. This is all politics for the Trump administration, nothing more, nothing less.

Vince
You comment is noted ...but how about the litany of Catholic Social Justice issues the liberals of this world demand be embodied in Gov Programs funded by tax payers?

Feeding the hungry, clothing the naked, and sheltering the homeless are even Enlightenment virtues, commonly shared by all people of humanity and decency. Humanists support equality, for sure at those minimums and probably even more, and human dignity. Were it not for the perversions of His message, Christ is the most enlightenment man in history!

So on that one, even the atheists and non-believers in Christianity would subscribe to the enshrinement of Christian virtues into secular law, as I presume even you do.

Oh Lord. I hope and pray the Vatican refuses to get into bed with this corrupt Administration. Trump corrupts everything and everyone he touches, and Pompeo just lied by glaring omission to the entire country. The cause is worthy, and the messenger is corrupt. How about if the US start with keeping its Current international agreements and moral commitments (most immediately, for instance, not abandoning the Kurds to be slaughtered by Turkey)?