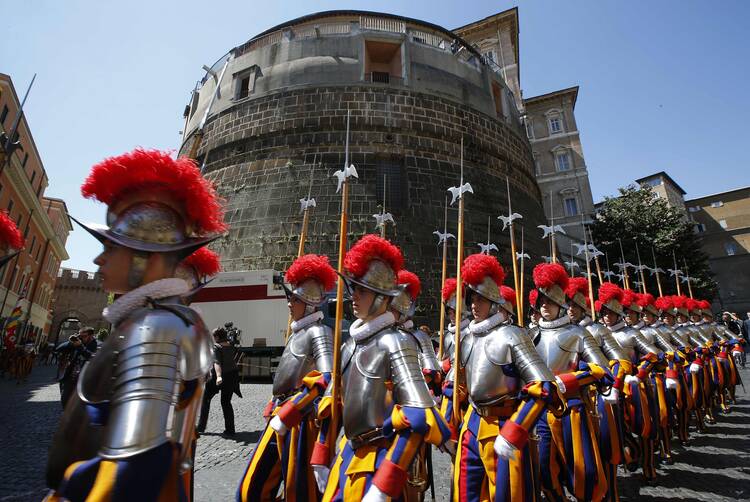 Recruits of the Vatican's Swiss Guard march in front of the tower of the Institute for Works of Religion in 2014. (CNS photo/Tony Gentile, Reuters)

Vatican police removed “documents and electronic devices” from offices of the First Section of the Vatican’s Secretariat of State and the Vatican’s finance control offices on Oct. 1. The raids were conducted on the orders of the Promoter of Justice, the chief prosecutor of the Vatican City State, and his deputy.

The news was broken by the Holy See’s Press Office in a communication to the international media hours after the morning raids. According to the Vatican statement, the raids were related to “denunciations presented at the beginning of last summer by the Institute for the Works of Religion,” more commonly known as the Vatican Bank,“ and by the Officer of the Auditor General.”

It said the denunciations related to “financial operations carried out over time,” without specifying the period in question. It added that the superiors of the offices in question had been informed of the operation but did not say if this was done before the document seizures took place.

“A senior Vatican source said he believed the operation, which had been authorized by Vatican prosecutors, had to do with real estate transactions.”

The Secretariat of State is the nerve-center of the Vatican and is divided into three sections. The first section deals with the general affairs of the church and has a wide-ranging brief. The second section is responsible for the Holy See’s relations with states, and the third oversees the Holy See’s diplomatic personnel and missions.

The Vatican’s Financial Information Authority (in Italian, Autorità di Informazione Finanziaria, or A.I.F.) is the competent authority of the Holy See/Vatican City State empowered to fight money-laundering and the financing of terrorism.

Given the delicate nature of what has happened, Vatican officials were reluctant to comment. But Reuters reports that “a senior Vatican source said he believed the operation, which the statement said had been authorized by Vatican prosecutors, had to do with real estate transactions.”

For nearly a decade, the Vatican has been trying to clean up its finances by adhering to international anti-money laundering norms and reforming its bank, the Institute for Religious Works, after decades of accusations that it worked as an off-shore tax haven.

Key to the effort has been the creation of the A.I.F., which works as an internal financial watchdog and liaises with financial intelligence units of other countries to share information about suspect transactions.

Last year, a former president of the Vatican Bank went on trial at the Vatican’s criminal tribunal on charges he and his lawyer embezzled $68 million in Vatican real estate sales; the trial is ongoing.

At the same time, though, Vatican prosecutors have been criticized by Council of Europe evaluators for their slow pace in investigating and prosecuting suspect financial transactions that are referred to them. In the spring, the Vatican is scheduled to undergo a regularly scheduled on-site evaluation by the Council of Europe's Moneyval evaluators to check its progress.

With Additional reporting from The Associated Press

“Reuters reports that ‘a senior Vatican source said he believed the operation, which the statement said had been authorized by Vatican prosecutors, had to do with real estate transactions.’” Not surprising, considering Catholicism, Inc.’s status as the world’s largest and longest existing international REIT.

Finally, some good news. Perhaps the Church is finally attempting to act in true accordance with Scripture. My anger has always been directed at the abuse of power, the sexual abuse, and financial sins which are gravely disordered acts in and of themselves for an institution which claims to be "for the poor". I've seen it at a local parish level (and it still continues!) The sin is deep and widespread, unfortunately.

hope somebody goes to jail

Vatican jail? What are the non liturgical judicial structures of the Vatican?

I read that Australian Cardinal Pell was looking into the Church's financial discrepancies when he was accused to sexual abuse of a minor last year. He was convicted and is now in prison. Was he getting too close to what the Vatican prosecutors are now investigating?