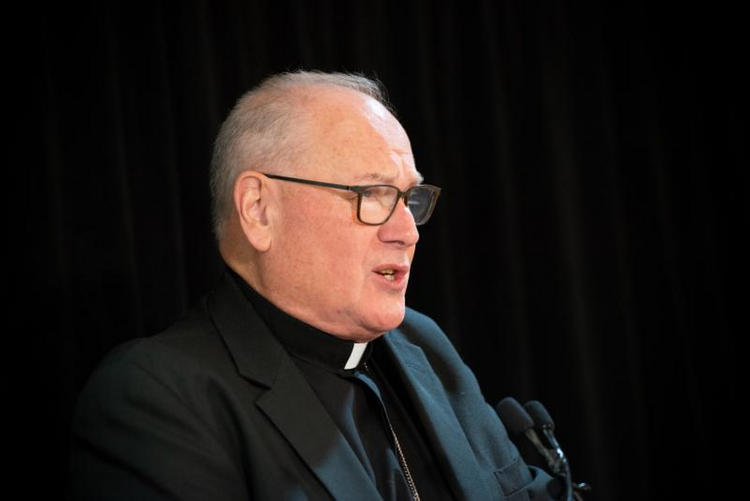 Cardinal Timothy M. Dolan of New York speaks during a Sept. 30, 2019, news conference at the chancery. Cardinal Dolan said he was "grateful and relieved" by the report of a comprehensive independent review of archdiocesan compliance with the U.S. bishops' "Charter for the Protection of Child and Young People." (CNS photo/Jeffrey Bruno for Catholic New York)

NEW YORK (CNS) — Cardinal Timothy M. Dolan of New York said Sept. 30 he was "grateful and relieved" by the report of a comprehensive independent review of archdiocesan compliance with the U.S. bishops' "Charter for the Protection of Child and Young People."

At a Sept. 30 news conference at the chancery in New York, former federal Judge Barbara S. Jones said, "Overall, I have found that the archdiocese has complied with the charter in all material respects. It has faithfully followed its policies and procedures and responded appropriately to abuse complaints, and is committed to supporting victim-survivors of abuse."

A year ago, on Sept. 20, 2018, Cardinal Dolan introduced Judge Jones as his first special counsel and independent reviewer. He tasked her to study archdiocesan policies and procedures with respect to sexual abuse by clergy and recommend enhancements directly to him.

Jones said she had complete access to archdiocesan records and conducted dozens of interviews, an exhaustive review of documents and an assessment of the practices of the archdiocese.

She and her team at Bracewell, an international law firm, reviewed "easily a couple of thousand" personnel files for every priest and deacon in the archdiocese and are confident that no archdiocesan priest or deacon with a substantiated allegation of abuse remains in ministry, she said.

Jones said most of the complaints received over the last several years are about incidents that took place decades ago and involved priests who are now deceased. "In the archdiocese, there are only two complaints of sexual abuse of a minor by an archdiocesan priest where the abuse occurred after 2002," she said.

The U.S. Conference of Catholic Bishops first adopted the charter in 2002 at their June meeting that year in Dallas. It includes a comprehensive set of procedures to address allegations of sexual abuse of minors by Catholic clergy, including prevention of future acts of abuse.

Jones said she reported her findings and recommendations to Cardinal Dolan on an ongoing basis during the year. She recommended significant technological enhancements, including an electronic case management system to track complaints, digitization of priest personnel files and an updated database for the Safe Environment Office which conducts background checks and training for 30,000 employees and volunteers who work with children.

She said prevention is the key to keeping children safe and the safe environment training should be conducted annually.

In addition, Jones recommended that the archdiocese hire a person whose sole responsibility is to oversee its response to sexual abuse complaints. She said the current system works well, with a victim assistance coordinator and associate who receive and respond to all victims and survivors, but they also have other responsibilities. Jones said the victim assistance program is a meaningful response to support victim-survivors of sexual abuse.

Jones said the archdiocese follows a strict protocol whenever it receives an allegation that a cleric has sexually abused a minor. The district attorney of the appropriate county is notified and regardless of whether criminal charges are brought, the archdiocese initiates an independent investigation by external investigators, some of whom are former federal agents.

The results are presented to a lay review board, comprised of lawyers, judges, parents, a psychiatrist, a priest and a religious sister. The lay review board may hear from the accuser and the accused before it deliberates in private to determine if a preponderance of the evidence supports the charges. If the allegation is substantiated, the board recommends to Cardinal Dolan that the cleric be permanently removed from ministry.

According to Jones, Cardinal Dolan has accepted the board's recommendation in each case and never returned to ministry any cleric against whom there has been a substantiated complaint.

In her report, Jones recommended that new members with additional areas of expertise be added to the lay review board. She also recommended that the independent investigations use best practices to ensure thoroughness, including additional in-person interviews and visits to the sites of alleged abuse.

Jones said since the first-in-the-nation archdiocesan Independent Reconciliation and Compensation Fund, or IRCP, was established in 2016, the New York Archdiocese has always accepted the independent administrators' determination of eligibility for compensation. As a result, it has paid more than $67 million to 338 victim-survivors. Jones said the IRCP has been "very effective" in helping victim-survivors receive compensation without enduring additional stress or lengthy litigation.

Claimants also may seek compensation through the new Child Victims Act, a New York state law that provides a one-year "window" to file lawsuits against negligent institutions, regardless of when the abuse took place. The window to make a civil claim opened Aug. 14 of this year.

Jones is a former prosecutor and assistant U.S. attorney who served 16 years as a judge in the U.S. District Court for the Southern District of New York. She served as chair of a congressional panel on sexual misconduct in the military and also conducted a full-scale review of the New York City Police Department's discipline policies.

Her role as special counsel to Cardinal Dolan and independent reviewer is ongoing.