A New York diocese filed for bankruptcy. Will others follow? 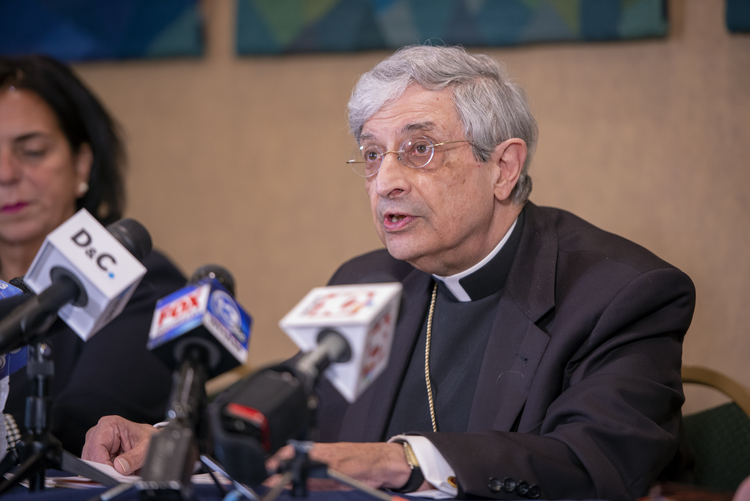 Bishop Salvatore R. Matano of Rochester, N.Y., speaks during a Sept. 12, 2019, news conference at the pastoral center in Rochester. In the wake of nearly 50 lawsuits filed against the Rochester Diocese since New York's Child Victims Act took effect Aug. 14, the diocese filed for reorganization under Chapter 11 of the U.S. Bankruptcy Code. (CNS photo/Jeff Witherow, Catholic Courier)

BUFFALO, N.Y. (AP) — The Roman Catholic Diocese of Rochester was the first in New York to seek bankruptcy protection under the weight of new sexual misconduct lawsuits, but lawyers and church leaders say it may not be the last.

All eight of the state's Roman Catholic dioceses face financial pressures as a result of the state's new Child Victims Act, which temporarily set aside the usual statute of limitations for lawsuits to give victims of childhood sexual abuse a year to pursue even decades-old claims.

More than 400 cases have been brought against the dioceses since Aug. 14, when the law's one-year "look back" period for such suits began.

Representatives from the dioceses of Buffalo, Rockville Centre, Albany and Ogdensburg told The Associated Press they haven't decided as they consult with legal, financial and insurance experts.

"While we evaluate our options, filing for bankruptcy protection remains one of those options," said Darcy Fargo, spokeswoman for the Diocese of Ogdensburg, which covers the rural, northernmost tip of the state.

Buffalo Bishop Richard Malone has said he is close to deciding whether to file for bankruptcy protection or litigate the nearly 140 new lawsuits his diocese is facing.

The Diocese of Albany, meanwhile, faces more than 30 lawsuits so far, but spokeswoman Mary DeTurris Poust said the diocese won't make any decision until "the full financial scope" of the Child Victims Act is known.

The Diocese of Rochester sought bankruptcy court protection Sept. 12 because of the new wave of lawsuits, becoming the 20th Roman Catholic diocese to do so nationwide in a sexual abuse reckoning that has now stretched on for 17 years.

Bankruptcy proceedings don't immunize dioceses from lawsuits, but they put claims under the supervision of a federal bankruptcy judge and require victims to get in line with all other potential church creditors. Plaintiffs' attorneys say proceedings also can limit their access to records exposing additional wrongdoing by priests or senior church officials who failed to act against suspected abusers.

With New York's window for lawsuits open until next August, attorney Michael Pfau, who has represented abuse victims in church bankruptcies outside New York, said additional bankruptcies are likely.

Such filings are usually met with distrust by claimants, Pfau said, but can have positive results.

The Rochester diocese's bankruptcy filing outraged the Senate sponsor of the Child Victims Act, Brad Hoylman, who said victims he has spoken to are motivated more by a sense of justice than money. A silver lining, he said, is that any diocese that seeks bankruptcy protection will see its assets scrutinized.

"It will lead to an accounting of the wealth of these institutions," he said.

Rochester's bishop, Salvatore Matano, called the decision to file for bankruptcy painful but said it was the best way to ensure all victims would be compensated.

"Had the diocese not filed under Chapter 11, it would face multiple civil actions, a slow, unpredictable and costly process that would require years of court involvement," he said, "and those claimants who filed suits first would receive all available funds to pay victims. As a result, later claimants would receive nothing."

Two New York dioceses that are among the largest in the U.S., the Archdiocese of New York and the Diocese of Brooklyn, as well as the Diocese of Syracuse, said they didn't anticipate having to file for bankruptcy.

Several dioceses in the state attempted to head off lawsuits in recent years by establishing independently run compensation programs that paid out tens of millions of dollars to victims, on the condition that they gave up their right to sue.

Insurers have covered a large portion of settlements reached in previous diocesan bankruptcy cases, a 2018 study by Penn State professor Marie Reilly found, with victims receiving an average award of $371,500.