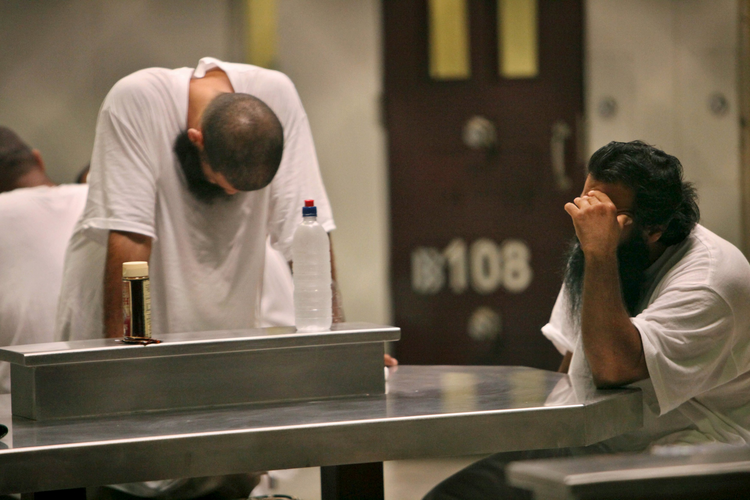 Detainees are seen inside the Camp 6 detention facility in 2009 at Guantanamo Bay U.S. Naval Base in Cuba. (CNS photo/Linsley, pool via Reuters)

Nearly 18 years after it was opened in the aftermath of the terror attacks of Sept. 11, 2001, the U.S. detention facility in Guantánamo Bay, Cuba, remains open. Only 40 prisoners—all suspected terrorists—remain, down from a high of almost 700 at the height of the war on terror in 2003. But the bill for running the prison has not similarly decreased. A New York Times investigation published on Sept. 16 concluded that the cost of operating Guantánamo in 2018 was more than $540 million—roughly $13 million per prisoner. Over 1,800 U.S. military personnel work at the prison, which amounts to roughly 45 soldiers per prisoner. By way of comparison, the National Center for Education Statistics estimates that the annual cost of holding these 40 prisoners at Guantánamo is equivalent to that of sending 9,000 U.S. students to a private college or university.

A New York Times investigation published on Sept. 16 concluded that the cost of operating Guantánamo in 2018 was more than $540 million—roughly $13 million per prisoner.

Guantánamo is markedly more expensive than its stateside peers. The Federal Register estimated in 2018 that the average annual cost per inmate in federal prisons was slightly more than $36,000. The advocacy group Human Rights First has estimated that even at the costliest federal penal facility, U.S. Penitentiary, Administrative Maximum Facility in Florence, Colo., commonly referred to as “The Alcatraz of the Rockies,” the average annual cost is approximately $80,000 per prisoner.

But that is the cost measured in dollars and cents. Since it opened in 2002, the Guantánamo Bay detention camp has also been plagued by allegations of human rights abuses, including the practice of waterboarding prisoners. This year a former inmate, Mohamedou Slahi, alleged that torture was commonplace at the facility as late as 2016. The facility at Guantánamo Bay has presented serious constitutional and human rights questions from the beginning. As America’s editors wrote in 2008, “the mass killing threatened by post-9/11 terrorists does require preventive measures, but not measures that deprive suspects of the basic right to challenge their arrest and detention” and to enjoy a reasonably speedy trial. Preventing terrorist attacks, “should not place suspects beyond legal redress.”

What is supposed to set the United States apart from “the bad dudes” is our fundamental respect for human rights and the rule of law.

More than a decade ago, President Barack Obama issued an executive order to close the Guantánamo Bay detention camp within one year. As a presidential candidate in 2008, Mr. Obama had promised he would do so, calling the facility a place where “we have compromised our most precious values.” His biggest Democratic rival that year, Senator Hillary Clinton, had also pledged to close the camp. Ironically, one major factor in Mr. Obama’s pledge to shut the prison down was its exorbitant cost—more than $900,000 per year per prisoner in 2013. Six years later, that cost has only grown.

Mr. Obama proved unable or unwilling to execute his own decision and in one of his earliest actions as president, Donald J. Trump revoked Mr. Obama’s order. Mr. Trump had campaigned in 2016 on a promise to keep Guantánamo open and “load it up with some bad dudes,” to bring back waterboarding and “a hell of a lot worse than waterboarding.”

Thus, we have come full circle. In the interim, while the political theatrics played out on both sides of the aisle, human rights were violated and the rule of law undermined. The extraordinary methods of interrogation used at Guantánamo Bay even exceeded the standards established by the U.S. Army Field Manual. And such methods were in addition to what the prisoners of Guantánamo endured in Jordan, Egypt and elsewhere as a result of “extraordinary rendition,” a contrivance designed to free interrogators from established moral and legal rules of conduct.

No one denies that the crimes allegedly perpetrated by the prisoners at Guantánamo Bay were profoundly immoral and a direct assault on the national security of the United States. Yet what is supposed to set the United States apart from “the bad dudes” is our fundamental respect for human rights and the rule of law. This is the source of our moral credibility. The facility at Guantánamo Bay contradicts those values. It should be closed as soon as possible and the prisoners should be transferred to maximum security facilities and tried in a court of law. More important, however, as America’s editors wrote more than a decade ago, “our country must still come to grips with our national acquiescence to the politics of fear, which has led to the detention and abuse of hundreds of individuals.” In the meantime, the bill keeps rising.

An earlier version of this editorial mistakenly attributed the quote “we have compromised our most precious values” to Republican Senator John McCain.

Are the people in Gitmo not prisoners-of-war?
That they are alive and fed and sheltered is mercy, in most centuries and most nations they would have been executed.
Is it being forgotten that after previous inmates were reviewed and released they were not long after killed while continuing their jihadi faith, killing apostates and infidels according to their custom?

We Catholics, Christians, and, indeed, basic human beings are not judges, juries and executioners. We do not execute people on the basis of what they MIGHT do in the future..

Islamo-terrorism is the greatest existential threat to the community of civilized nations... Do not move these men onto U.S. soil.

History teaches that America's "moral credibility" (as the article likes to mention) is found in our republican form of government, and not found in sympathizing with supreme evil. (Pedophilia is another type of supreme evil).
/geo ex machina

Good article from the editors. All prisoners held at GITMO deserve the trials they have long been denied then either release or to be transferred to a prison that is more humane and recognized by law.

George W. and his legacy of horror.

Crime has NO punishment?
Does law deny respect for itself?

When it is a question of Capital Punishment, let us replace it with SERVICE for common GOOD of the People of the Nation and of the world.

It is a matter of collective resolution of a very serious World problem and NOT an individual choosing on his own to forgive one's ENEMY.

This article also appeared in print, under the headline “Guantánamo must close,” in the October 14, 2019, issue.