Review of Canadian Caritas is hurting its credibility, says ex-president

Review of Canadian Caritas is hurting its credibility, says ex-president 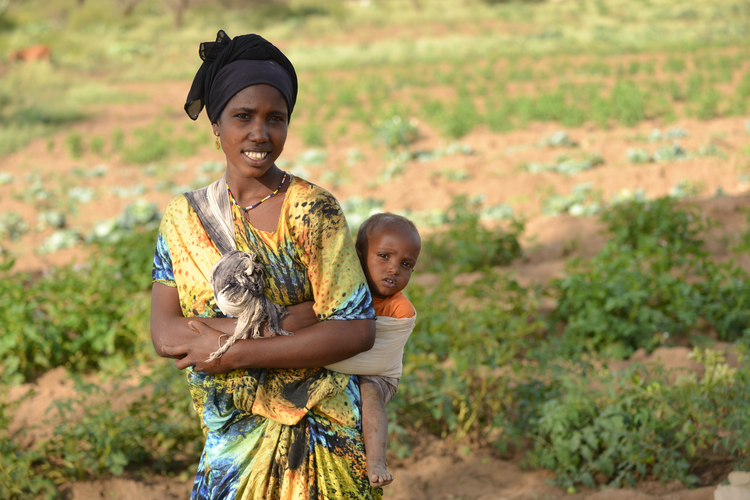 Anisa Gourate and her son, Muhammad, pose in 2015 on their farm near Jijiga, Ethiopia. With support from the Canadian Catholic Organization for Development and Peace the Gourate family has a livelihood that will support their healthy young family. (CNS photo/Michael Swan, Catholic Register)

MONTREAL (CNS) -- The former president of Development and Peace, the Canadian member of the international Caritas organization, said the Catholic bishops' attitude toward their charitable agency is hurting its membership and credibility.

Development and Peace is being criticized by a handful of Canadian bishops who suspect the organization might be supporting partners that do not conform with the church's moral values, especially regarding women's sexuality and abortion. The Canadian Conference of Catholic Bishops and Development and Peace are conducting a joint review of these partnerships; their conclusions regarding 52 of the 180 partners are expected to be made public by the end of September.

Some expect the information to be released during the CCCB's annual plenary assembly in Cornwall, Ontario, Sept. 23-27.

In 2018, these doubts led a dozen bishops to freeze Lenten donations collected in their dioceses for Development and Peace. The donations have since being given to the organization, which promised they would not be used to support the 52 partners being studied.

"If a negative decision is taken on Development and Peace and its partners, the bishops and the church will have to live with it," warned Jean-Denis Lampron, who was president of the organization's National Council from 2015 to 2018, when cancer forced him to step down. "Will they destroy Development and Peace? Will they commit to continuing their work? I don't know.

"I'm not saying Development and Peace is perfect. Far from it. But it seems to me they're (bishops) trying to kill a fly by using an atomic bomb. It's discouraging, it's demotivating, it's even criminal. The word is hard, but we're touching the very integrity of people here," said Lampron.

No document in the dispute was made public. However, documents leaked last November showed a deep disagreement between the CCCB and Development and Peace about whether or not these partners might adhere entirely to the church's moral teachings.

Lampron said the CCCB seemed more prone to listen to pro-life lobbies such as LifeSiteNews than to trust its own charitable aid agency.

"This whole story will have an impact on members and donors. We already feel a demobilization among the members. And people stopped giving. An irreparable harm has been done," said the former president.

These past months, as part of the review process, some of Development and Peace's partners received letters from leaders of the agency and the CCCB, expressing some "concerns" about their work. Some partners felt insulted.

"It certainly wasn't a letter of solidarity with our work," wrote Jesuit Father Ismael Moreno, known as Padre Melo, director of Radio Progreso and a Jesuit center for reflection, research and communications in Honduras. "And even less a note of compassion for the threats we face all the time -- including the death threats received by our team members because of their defense of human rights and environmental rights."

On July 30, the Canadian Jesuits voiced their support for Padre Melo's work in a public letter.

"We are concerned that the allegations currently circulating and a potential loss of support from certain groups and leaders in our church may put their lives at even greater risk," wrote the Canadian Jesuits.

"What information we have about the 2018 CCCB research findings on (Development and Peace) partners is of great concern to us. Our hope is that the criteria being used in the current process of review is comprehensive in its understanding of the church's social teaching and its defense of life in all of its dimensions, at every stage, and in all its diversity; denouncing poverty as an affront to the dignity of women and men, promoting peace, protecting human rights as well as the environment," they wrote.

On Aug. 1, Archbishop Miguel Cabrejos Vidarte of Trujillo, Peru, president of the Latin American bishops' council, or CELAM, expressed his support in a letter to Development and Peace, thanking the organization for its work with partners in Latin America, even with those who are not necessarily Catholic.

Also in August, the CCCB explained in an email sent to the Canadian agency Presence info that "since the launch of the joint review initiated by the Canadian Conference of Catholic Bishops (CCCB) and the Canadian Catholic Organization for Development and Peace (CCODP)-Caritas Canada, the object of the exercise has remained clear: to ensure that the work of CCODP, and that of its direct international partners, do in fact adhere to the principles and values of Catholic social and ethical teaching."

CCCB communications coordinator Lisa Gall said Canadian bishops see themselves as "stewards of the funds collected in Catholic parishes or from individual Canadian Catholics" for Development and Peace.

"The partnership review is, therefore, only seen correctly when it is understood in terms of fiduciary responsibility; it represents the kind of accountability, transparency and responsibility donors expect of any organization like (Development and Peace) ... consistent with the highest expectations of best practices in international development work today," said Gall.

This is a biased representation of issues involving Development and Peace (or, originally, Canadian Catholic Organization for Development and Peace). The problems are not new, they go back well over a decade. During this time, D and P has increasingly assumed the role of an independent charitable agency, forgetting its Catholic roots. First, in its everyday use, it (unofficially) dropped the “Canadian Catholic Organization” designation from its name (especially in its French language publications). Eventually, it has relied less and less on the richness of the tools and teachings of Catholic social teaching, and functioned and sounded more and more like one of the many social agencies competing for the charitable donations of well meaning people and the contribution of the Canadian government (the government matches dollar for dollar the donations received directly from donors). The great advantage of D and P is its direct access to a captive audience, the people gathered for Sunday liturgies. For many years, the bishops have repeatedly tried to resolve the, what they have identified as, problems. However, D and P, appealing to its democratic structures, fiercely protected its “independence.” This is why some bishops decided to withdraw their support.