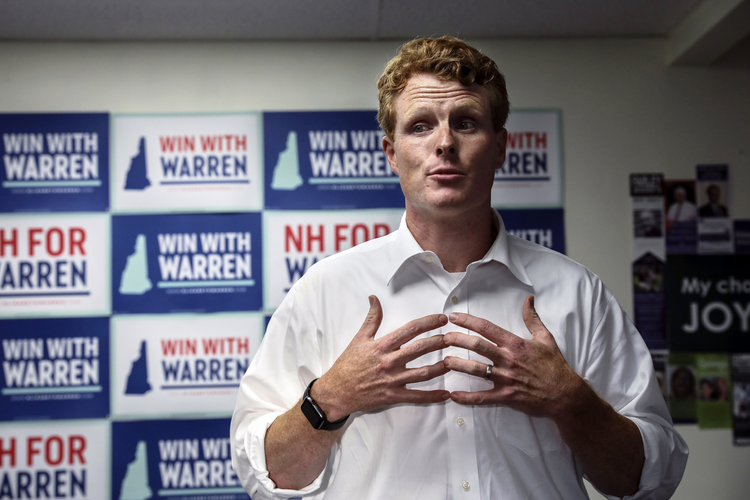 BOSTON (AP) — When Edward M. Kennedy was running for the U.S. Senate for the first time in 1962, his Democratic primary opponent turned to him during a debate and said if his last name was Moore — Kennedy's middle name — his "candidacy would be a joke."

Fortunately for Kennedy, he shared a last name with his brother John F. Kennedy — then the U.S. president — and went on to win the Senate seat he held for the next 47 years.

More than half a century later another Kennedy — U.S. Rep. Joe Kennedy III — is testing the staying power of his family's political mystique in a state that's nearly synonymous with the Kennedy clan as he prepares to launch a Democratic primary challenge against incumbent U.S. Sen. Edward Markey.

Kennedy is expected to formally announce his decision Saturday morning in Boston. If successful, he would be the fourth member of the Kennedy family to win a seat in the Senate.

It's a battle that assesses not only the post-Camelot strength of the Kennedys but also whether the 38-year-old congressman can join the ranks of a changing Democratic party that has rewarded younger politicians like Alexandria Ocasio-Cortez of New York and Ayanna Pressley of Massachusetts for successfully challenging incumbent Democratic members of the U.S. House.

Last year, underscoring how Kennedy's star has been rising, he was tapped to deliver the Democratic response to President Donald Trump's State of the Union address.

While his name is undoubtedly an asset — he's the grandson of Robert F. Kennedy and son of former U.S. Rep. Joe Kennedy II — many of those watching the budding contest say Kennedy, who has served in Congress since 2013, still needs to make a convincing case to voters.

"Of course people in Massachusetts know the Kennedy name, but it's largely historical at this point," said Mary Anne Marsh, a Democratic strategist in Massachusetts. Marsh noted that Edward Kennedy died a decade ago.

Marsh credited the younger Kennedy for working hard to win his House seat — shaking hands, traveling throughout the district and listening to voters — and said that work appears to be paying off as he weighed a run for Senate, noting two recent polls that showed Kennedy ahead of the 73-year-old Markey.

Marsh also said the single biggest goal Democrats have in the coming election — defeating Trump and undoing his legacy — may play to Kennedy's perceived strengths if he can bring a sense of urgency to the race. That message may be a tougher sell from Markey, she said.

Others see a tighter contest between the two, despite the Kennedy legacy.

Erin O'Brien, an associate professor of political science at the University of Massachusetts-Boston, cautions against counting Markey out, pointing to what she said is a generational split among the electorate. Older voters may have an emotional connection to the Kennedy clan that younger voters don't share.

"Younger Democrats care more about the environment and climate change," she said. "At least initially they're rallying around Ed Markey."

O'Brien said that Kennedy — unlike U.S. Reps. Seth Moulton and Pressley, who also defeated Democratic incumbents in Massachusetts — has yet to come up with a strong argument about why voters should dump Markey.

"He is trying to capitalize on squad energy when he has no authenticity to be a member of the squad," she said, referring to a group of four Democratic members of the U.S. House including Rashida Tlaib of Michigan, Ilhan Omar of Minnesota, Pressley and Ocasio-Cortez.

By challenging Markey directly rather than waiting for an open seat, Kennedy also avoids having to run in a crowded primary, which could include other members of the state's congressional delegation.

Unlike Kennedy, Markey didn't inherit a famous political name. His father drove a milk truck and he was the first in his family to get a college degree.

He had been trying to shore up his political support before Kennedy's announcement. Markey has been quick to point to the endorsement of his campaign by fellow Sen. Elizabeth Warren. Warren, who taught Kennedy at Harvard Law School, endorsed Markey in February. She's spoken highly of both candidates.

Equally important for Markey as he tries to woo younger and more liberal Democrats may be his endorsement by Ocasio-Cortez, who teamed up with Markey early on to push the "Green New Deal" climate change initiative.

It's unusual for an incumbent senator to have a serious primary challenge, and most recently, it's happened far more to Republicans.

Given that there are few strong ideological divides between the two candidates, voters may end up choosing sides quickly, said John Cluverius, associate director of the UMass Lowell Center for Public Opinion.

"This primary isn't about substance or even style, really. It's shaping up to be a 'Seinfeld' primary: In most ways, it's about nothing, but it's going to deeply divide people strongly attached to one side or the other," he said.

He better have a very good reason, show some very strong problems with the incumbent.

I live in Toledo and am being solicited by the Kennedy campaign, as if I have any idea where he stands on anything.