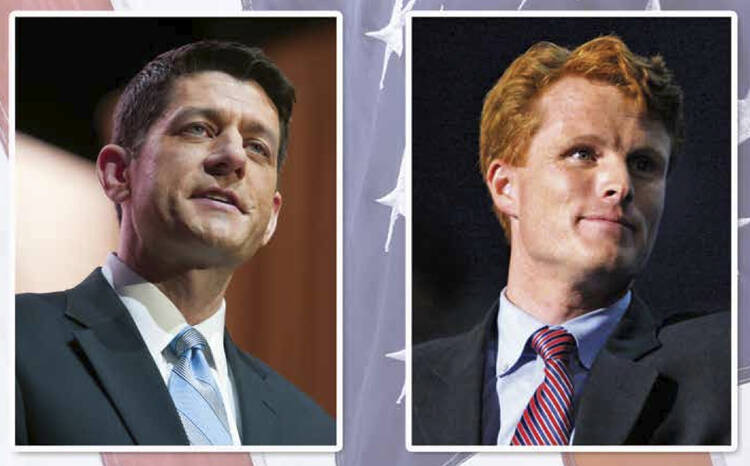 America asked two prominent members of Congress, both Catholics with famous names, to respond to Pope Francis’ repeated calls to empower the poor.

Paul Ryan, the Republican chairman of the House Budget Committee, is an eight-term member of Congress from Wisconsin’s 1st Congressional District. In "Preferential Options" (10/13), Rep. Ryan writes that debates over poverty often present the market and government as two competing principles, when in fact they are both tools that can "work together to enhance human dignity." Fighting poverty, he argues, requires striking a balance between solidarity (a shared commitment to the common good) and subsidiarity (deference to those closest to the problem).

Joe Kennedy III is a Democratic congressman from the Fourth Congressional District of Massachusetts and a member of the House Foreign Affairs Committee. His prescriptions for addressing entrenched poverty likewise spring from the "fundamental human dignity that lies at the very heart of our Catholic faith." In "Dignity For All," (10/20), argues agaisnt the widespread belief that "Poverty is bred of individual inadequacy and government dependency." Poverty, he writes, "is the product of an economic infrastructure that builds heavy ceilings above the weak and vulnerable instead of sturdy floors beneath their feet."

Both congressmen share specific economic and social policies that reflect their understanding to Catholic social teaching. Rep. Ryan would "reconceive the federal government’s role. No longer would it try to supplant our local communities." His proposed Opportunity Grant pilot program would consolidate "11 federal programs into one stream of funding to participating states," which:

could use that money to expand state programs and to partner with local service providers. So families in need would have a choice. There would not just be a state agency or a federal agency. Instead, they could choose among non-profits like Catholic Charities USA, for-profits like America Works or even community groups unique to their neighborhood. And instead of offering a bunch of different benefits, these groups could offer a more holistic form of aid through case management.

Rep. Kennedy argues that "tackling the profound economic inequity in this country means realigning public policy with the fundamental American idea that what you start with does not determine where you end up." Reversing cuts to the safety net, investing in early childhood education, creating family-friendly work policies, cracking down on predatory lenders—none of these policies are a silver bullet, "but together they work to reform a system that routinely denies working-class families mobility, opportunity and justice."

Ashley McKinless
@AshleyMcKinlessmckinless@americamedia.org
Show Comments (
2
)
Comments are automatically closed two weeks after an article's initial publication. See our comments policy for more.
Mary Sweeney
7 years 3 months ago
Excellent article for reflection for today, Yom Kippur. There is a war against the poor. We have to contemplate how we can atone, how we can make right, how we can make just.
Andrew Eppink
7 years 3 months ago
Why does anything the pro 'choice'/abortion Kennedy says appear in any Catholic publication?