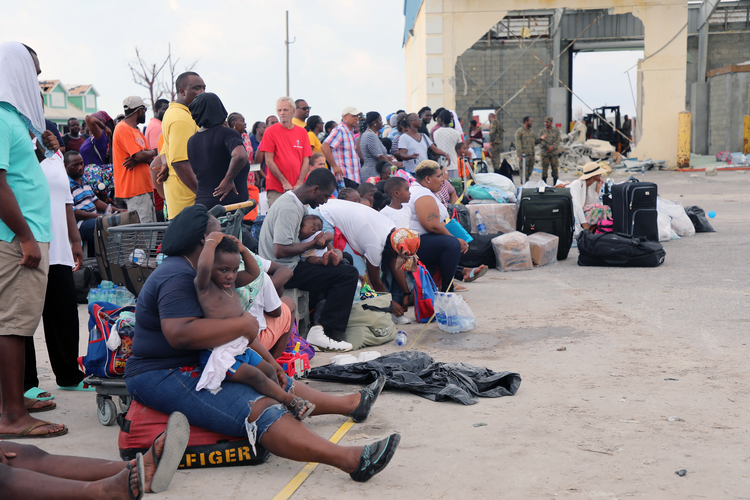 People wait in Marsh Harbour Port to be evacuated to Nassau, in Abaco, Bahamas, Friday, Sept. 6, 2019. The evacuation is slow and there is frustration for some who said they had nowhere to go after the Hurricane Dorian splintered whole neighborhoods. (AP Photo/Gonzalo Gaudenzi)

Describing “massive destruction on a scale we have never before seen in the history of our little nation,” Patrick Christopher Pinder, C.M.G., the archbishop of Nassau, issued an appeal for donations and emergency assistance as Hurricane Dorian continued its destructive march along the U.S. Eastern Seaboard on Sept. 6.

Archbishop Pinder said the diocese was already preparing to address basic needs of those left homeless by the Category 5 hurricane, which had lingered for days over the Bahama islands. “The first response is, of course, meeting those very, very basic human needs, providing basic food, water, shelter, clothing and so on,” he said in a video statement on the archdiocesan website.

“Infrastructure has been severely damaged, as have institutions and businesses,” Archbishop Pinder said. Though the official death count was 30 on Sept. 6, “we are assured the death toll is bound to increase.” The government of the Bahamas is reporting that thousands are missing in the aftermath of the storm. As international response efforts ramp up, a team from Virginia’s Fairfax County Urban Search and Rescue was on the ground conducting search and rescue efforts.

“Infrastructure has been severely damaged, as have institutions and businesses,” Archbishop Pinder said. Though the official death count was 30 on Sept. 6, “we are assured the death toll is bound to increase.”

The archbishop estimates that as many 70,000 people are homeless and will require immediate emergency aid. But that crisis response will only be the beginning; entire communities have been washed away by the storm, and thousands have been left homeless and bereft of employment.

“The scale of destruction brought by Hurricane Dorian is such that our rebuilding effort is going to take a long, long time,” he said. “So our initial response is very important, but the long-term response is going to be equally important.”

Archbishop Thomas Wenski of Miami has called for a special collection at Masses over the next two weekends to help finance what will be a “slow and long process” of recovery in the Bahamas.

The International Organization for Migration is providing 1,000 tarpaulins to replace roofs stripped from homes on the islands of Abaco and Grand Bahama.

“Right now, the priority is the search and rescue operation, conducted by the Bahamas’ National Emergency Management Agency and the Bahamas Defence Force,” said Jan-Willem Wegdam, the head of I.O.M.’s emergency response team. “After everyone has been rescued from under the debris and the wounded safely evacuated, I.O.M.’s focus will be on providing temporary shelter for those who lost their homes.”

In a situation report released on Sept. 5, the U.S. Agency for International Development said that critical infrastructure, including airports, health facilities, ports and telecommunications structures, remained impaired in the Bahamas due to damage and flooding, “limiting response activities and on-the-ground assessments in affected areas.” The U.S. Coast Guard recorded 114 rescues from flood-inundated areas of the Bahamas as of Sept. 4.

On hard-hit Abaco, where hundreds of homes were destroyed, survivors waited for evacuation. “It’s chaos here,” Gee Rolle, a 44-year-old construction worker, told The Associated Press as he waited with his wife for a boat that could take them to the capital, Nassau. “The government is trying their best, but at the same time, I don’t think they’re doing a good enough job to evacuate the people. It ain’t livable for nobody. Only animals can live here.”

At the port, some of those who lined up behind a yellow cloth tape arrived as early as 1 a.m., hoping to get to Nassau.

There were no government-organized evacuations yet, but the Royal Bahamas Defense Force helped people board a 139-foot ferry that had come to pick up its employees and had room for an additional 160 people. The crowd waited calmly as marines separated women and children to let them board first.

“It’s going to get crazy soon,” said Serge Simon, 39, who drives an ice truck and waited with his wife and two sons, 5 months old and 4. “There’s no food, no water. There are bodies in the water. People are going to start getting sick.”

Though some communications have been restored, electric service on the Bahamas has been wiped out, and the Ministry of Health reports that flooding at the Rand Memorial Hospital in Freeport is contaminated with sewage. The World Health Organization warns that because of the floodwaters and potential sewage contamination, the risk of diarrheal and waterborne diseases remains high.

“The Bahamas faces a long road to recovery. Building back the destroyed infrastructure, with increased resistance in the face of extreme weather, will be critical to increase the resilience of the communities,” said Mr. Wegdam.

Archbishop Pinder said his staff was preparing to attend to both the spiritual and psychological well-being of the survivors on the Bahamas, urging support from overseas as an expression of solidarity, caring and unity with them. “Certainly we rely on the grace of the Holy Spirit,” he added, “to give us the wisdom, the peace of mind and the strength to make it through this most difficult time in our nation’s history.”

Donations are being accepted at the Archdiocese of Nassau, Catholic Relief Services and Catholic Charities USA.