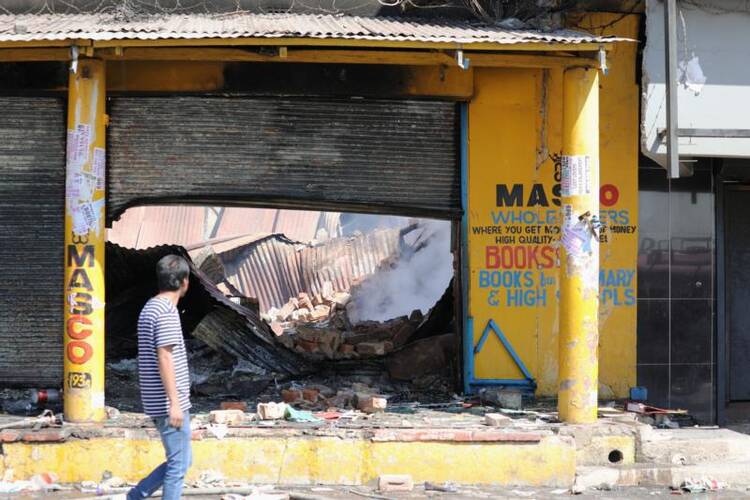 Police arrested at least 70 people in South Africa's commercial capital, Johannesburg, Sept. 2, after protesters looted mostly foreign-owned shops and set fire to cars and buildings in the second outbreak of urban rioting in a week.

Earlier, hundreds of protesters in the administrative capital, Pretoria, set fire to buildings, looted shops and clashed with police, who fired rubber bullets at the crowds.

The Jesuit Institute "strongly condemns the deplorable violence, thuggery and looting," it said in a Sept. 2 statement, noting that perpetrators of "these criminal acts must be held responsible."

It urged law enforcement agencies, "often working in difficult and dangerous situations, to work tirelessly to maintain law and order."

Some "leaders have contributed to this sad state of affairs by their irresponsible, populist remarks for political expediency," it said. Words "have power and the ability to influence," the institute said, noting that "xenophobic rhetoric leads to xenophobic behavior."

Beneath the protesters' "frustration and anger is a despair at the lack of service delivery, economic empowerment and security of our own people. We must hold politicians accountable for this," it said.

Archbishop Buti Tlhagale of Johannesburg said in April that xenophobic attacks are sometimes linked to protests about lack of clean water, electricity, housing and other grievances. He noted that "the anger and frustration of the local people at government's empty promises have tended to engulf migrants who live in the same neighborhood as the protesters."

The Jesuit Institute said, "Leaders who have made irresponsible remarks must publicly apologize to everyone living in South Africa." It urged people to seek ways "to reach out to all those in need in our country" and to demand accountability from leaders.

"Violence, robbery and lawlessness can never be condoned and are never acceptable ways of acting," it said. "The ongoing chaos has violated basic human rights and makes a mockery of the law."

South Africa is a major destination for economic migrants from other parts of Africa, including the southern African region, with many moving from neighboring Zimbabwe, Lesotho and Mozambique in search of work.