Cardinal George Pell’s appeal verdict is coming—but it still might not be the final word.

Cardinal George Pell’s appeal verdict is coming—but it still might not be the final word. 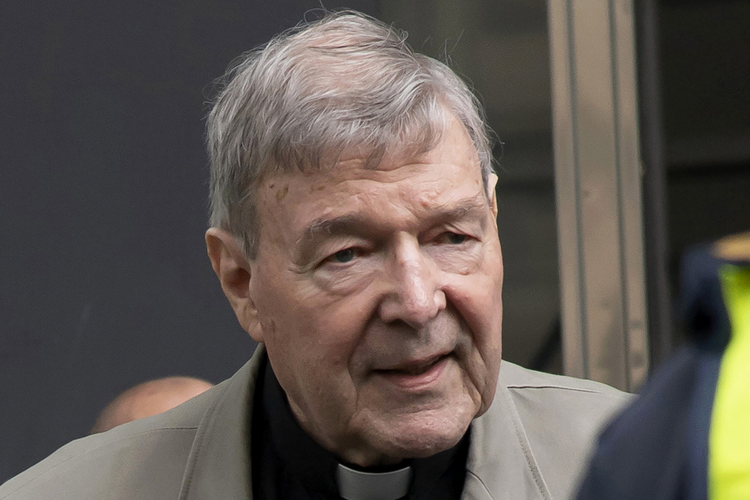 In this Feb. 26, 2019, photo, Cardinal George Pell leaves the County Court in Melbourne, Australia. Pell’s lawyers argued in his appeal that there were more than a dozen “solid obstacles” that should have prevented a jury from finding him guilty beyond a reasonable doubt of molesting two choirboys. The appeal court will give their verdict on Aug. 21. (AP Photo/Andy Brownbill)

MELBOURNE, Australia (AP) — The most senior Catholic cleric found guilty of sexually abusing children will learn the outcome of his appeal on Wednesday though the verdict still may not be the final word on his convictions for molesting two choirboys in an Australian cathedral more than two decades ago.

The Victoria state Court of Appeal heard arguments from Cardinal George Pell's lawyers and prosecutors in June. In recognition of the intense public interest, the court is taking the unusual step of livestreaming its judgment on his appeal.

The 78-year-old former Vatican finance minister would walk free if the three judges acquit him of the five convictions. They also could order a retrial, in which case Pell would be released on bail, or they could reject his appeal.

Pell has been in a Melbourne prison since March when he was sentenced to six years for convictions on charges that he orally raped a 13-year-old choirboy and indecently dealt with the boy and the boy's 13-year-old friend in a rear room of St. Patrick's Cathedral in Melbourne in December 1996. He was also convicted of squeezing one of the boy's genitals in a cathedral corridor in February 1997.

[Explainer: The context and history of the Cardinal Pell verdict]

Pell had become archbishop of Melbourne, Australia's second-largest city, months before his crimes are alleged to have taken place and had set up a world-first compensation arrangement for victims of clergy sexual abuse. He was described at his trial as the Vatican's third most senior cleric.

Melbourne Archbishop Peter Comensoli told Australian Broadcasting Corp. last week that had he visited Pell in prison two months ago and described his state as: "a bit like a calm in a storm."

Comensoli said Pell's imprisonment — being held in protective custody as a convicted pedophile and spending 23 hours a day alone in his cell — "takes its toll."

"There'd be a psychological agitation about waiting for what's going to be the outcome of the appeal, but I found him strong ... spiritually and calm and very conversive," Comensoli said.

Prison authorities announced two weeks ago they were investigating whether Pell had breached rules by writing a letter dated Aug. 1 that was circulated by his supporters on social media. Prison rules forbid prisoners from posting on social media, using the internet, or asking others to post on their behalf.

"My faith in our Lord, like yours, is a source of strength," the two-page handwritten letter said, thanking supporters for between 1,500 and 2,000 letters Pell had received in prison.

"The knowledge that my small suffering can be used for good purposes through being joined to Jesus' suffering gives me purpose and direction," the letter added.

The Department of Justice and Community Safety did not respond to a request on Monday for an update on the investigation into the suspected breach.

Some observers suspect the long wait for a verdict after the appeals court heard Pell's case on June 5-6 means the judges were taking time to ensure as best they can that their ruling won't be overturned in the High Court, Australia's final arbiter. Both sides can appeal under Australian law, so consideration in the High Court is likely.

Many supporters have urged the public to withhold their judgment of Pell until the result of the appeal is known.

"If we are too quick to judge, we can end up joining the demonizers or the apologists, those baying for blood or those in denial," Sydney Archbishop Anthony Fisher told a congregation.

The Australian Catholic University said its Pell Center at its campus in Pell's hometown of Ballarat would not be renamed until the appeal process was completed, angering academic staff.

But Patrick's College, the prestigious Catholic school where Pell was educated in Ballarat, renamed a building named after him and removed his name from the school honor board.

"The jury's verdict demonstrates that Cardinal Pell's behaviors have not met the standards we expect of those we honor as role models for the young men we educate," headmaster John Crowley said

But the school said it could change its decision after the appeal.

Pell's lawyers had to prove to the appeals court that the jury that unanimously convicted him in December must have held a reasonable doubt about his guilt. An earlier trial had ended in a deadlocked jury. An 11-to-1 majority decision to either convict or acquit could have been accepted, but at least two jurors held out.

Prosecutors replied that the evidence of more than 20 priests, choristers, altar servers and church officials showed there were "possible hindrances" to the prosecution case, but did not preclude the jury from being satisfied beyond a reasonable doubt of Pell's guilt.

Pell's lawyers argue the events in 1996 as described in the prosecution case were "improbable and even impossible" to have happened quickly and in part of the cathedral where altar servers and priests were likely to walk in at any moment.

One of the choirboys, identified by the sentencing judge as J.J., was the key prosecution witness. His friend, identified as M.R., died of a heroin overdose in 2014 at the age of 31 without ever complaining he had been abused.

Pell did not testify at either of his trials. But both juries saw a video of a police interview of him in Rome in 2016 in which Pell rejected the allegations as "absolutely disgraceful rubbish" and a "deranged falsehood."

Clerical sexual abuse and the Catholic church's handling of such cases worldwide have thrown Pope Francis' papacy into turmoil.

In a little more than a year, the pope has acknowledged he made "grave errors" in Chile's worst cover-up, Pell was convicted of abuse, a French cardinal was convicted of failing to report a pedophile, and a third cardinal, former U.S. church leader Theodore McCarrick, was defrocked after a Vatican investigation determined he molested children and adults.

This is a good but not great article, since it fails to give sufficient detail of the absurdity of the jury verdict. The final paragraph on Pope Francis is sadly true - he has been too lenient on several clerics where the public evidence is stronger, or at least plausible. But Belarat's Patrick's College's headmaster is outrageous and Orwellian, as he is willing to severely denigrate Cardinal Pell based not on being convinced by the arguments of the case, but purely on the second jury result (which he admits is questionable by leaving open the possibility of a reversal after the appeal). He should have waited until the process was complete, as the Vatican is doing.

Keep in mind the contradictions of the accuser (the sole witness) and imagine the scene - a newly elevated Archbishop, who had just brought in reforms to address child abuse, a stickler for liturgical decorum, inexplicitly has a lapse of habit and an uncontrollable urge, in the middle of a busy morning (his first Mass in his Cathedral). He dashes away from his helpers into the sacristy, keeping the door wide open. He manages to whip his long and unruly vestment over his head or up half his body, all the while people could be walking in and out. He has time and energy for forced oral sex with two boys (not once, but twice!), then a quick slip back on of the vestment, a regaining of his composure, tidying his clothes, and finally, a rush back to greet the congregation and his attendants, who were patiently and incuriously waiting for him. Oh, and the 2 choir boys go back to rehearsal and never speak about it for decades to come. And one denies anything happened to his mother when pressed (years later). All in 6-8 minutes. Sounds more like a macabre Monthy Python act or something from a dreadful porn circus. Preposterous. This panel of appeals judges should set Cardinal Pell free. Anything less is cowardice in the face of a mob.

Tim O'Leary, I want to thank YOU and I'm sure Cardinal Pell does as well, as well as all people of good will and good faith. This, as you have described (and is there any reason to doubt the timeline you've meticulously outlined) is just one huge travesty, and Pell is the victim of the selfishness of our age. I am so ashamed of our Church leadership writ large, and I would suggest that Pell is NOT part of the problem, he has been, and demonstrably so, part of the solution and God grant him many years and some semblance of justice when this is all said and done.

Australia is hardly a bastion of the Catholic faith, and those who actually adhere to the true and perennial teachings of Mother Church are sure to be publicly targeted, and this is not unique to Cardinal Pell, not at all.

God bless you, and really sad that your sort of "telling the straight facts" without a hint of taint is just so blessedly missing from this blessed mess of a magazine. (Maybe you'll start a trend, one can still hope!!)

God grant YOU many years as well.