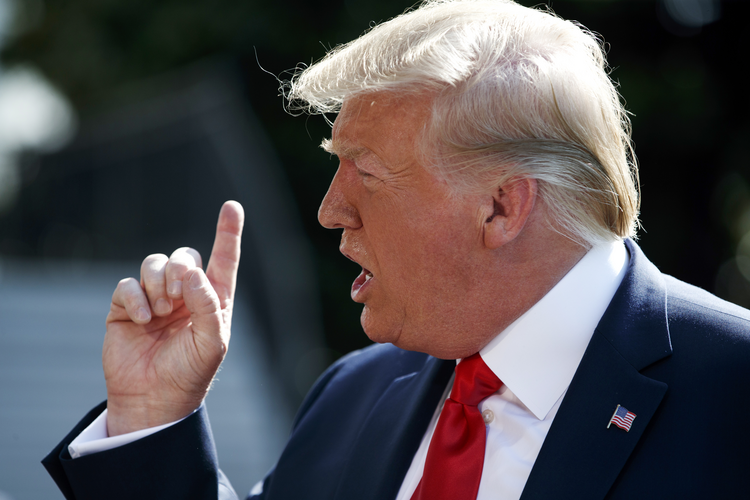 President Donald Trump talks to reporters on the South Lawn of the White House, Friday, Aug. 9, 2019, in Washington, as he prepares to leave Washington for his annual August holiday at his New Jersey golf club. (AP Photo/Evan Vucci)

SCOTTSDALE, Ariz. (CNS) -- Delegates at the Leadership Conference of Women Religious' annual assembly, meeting in Scottsdale, approved a letter to be sent to President Donald Trump asking that he stop using "divisive and polarizing rhetoric."

"We implore you to never use language that disrespects, dehumanizes or demonizes others," the letter said. "We expect our president, and all who serve this nation as leaders, to be always mindful of the common good and the dignity of each and every person."

LCWR, in an Aug. 14 announcement on the letter, said there were 663 members in attendance at the Aug. 13-16 assembly. LCWR represents religious orders with about 35,000 sisters.

Trump has been accused of sowing division and discord with his public remarks and especially through his use of Twitter.

“We are outraged and heartbroken when our political leaders appeal to our basest instincts and stoke the fires of fear that threaten to tear the fabric of our nation apart.”

"We are outraged and heartbroken when our political leaders appeal to our basest instincts and stoke the fires of fear that threaten to tear the fabric of our nation apart," the sisters said. "We cannot, we will not, let the voices of hatred and fear carry the day."

The LCWR letter recalled Pope Francis' address to a joint session of Congress during the pontiff's 2015 visit to the United States.

"Each son or daughter of a given country has a mission, a personal and social responsibility," Pope Francis told the lawmakers.

"You are called to defend and preserve the dignity of your fellow citizens in the tireless and demanding pursuit of the common good, for this is the chief aim of all politics. A political society endures when it seeks, as a vocation, to satisfy common needs by stimulating the growth of all its members, especially those in situations of greater vulnerability or risk," he added. "Building a future of freedom requires love of the common good and cooperation in a spirit of subsidiarity and solidarity."

“We promise to never cease raising our voices on behalf of the common good and praying for the healing of this country.”

While acknowledging that "we are caught in a political culture paralyzed by ideological extremism and hyper-partisanship," the sisters reminded Trump, "these are times that require exceptional insight and courageous leadership."

The LCWR letter told the president, "We too have to reach deep within ourselves to bring forth the grace and strength that are needed to not give in to the temptation of labeling or judging those who are different from us. We share with you, Mr. President, that maintaining this fundamental stance in life requires discipline and fortitude and a constant examination of our daily thoughts and deeds in light of our beliefs.

"We sometimes come up short, but pledge to do better each day because we are aware of the moral authority we, as sisters, bear. We ask you, Mr. President, if you would consider a similar examination of the practice of your own moral authority.

In their appeal to Trump, the sisters told him, "You hold a position that has the potential to inspire the best of every one of us and we ask you to use this unique status to bring about healing and never seek to create division."

The sisters said in closing: "We promise to never cease raising our voices on behalf of the common good and praying for the healing of this country."

God bless our fearless sisters, speaking truth to power and telling it like it is!

I wish that the (male) Bishops have the same courage to stand up to this bully in chief like the sisters! God bless our dear sisters.

A fearless group of Dominican sisters told me that a beauty and an equal challenge of a healthy intentional community is that "it rubs our rough spots smooth" if we humble ourselves to cooperate. May God bless the sisters, as they continue to live their prophetic role and as they extend this invitation
in every community they encounter.

We know the Clinton’s, Harvey Weinstein, Jeffrey Epstein and all the elite Hollywood and Wall Street perverts were all very polite to each other..,.sorry, Ill take the rude brutish guy that calls them out. All that fake Washington DC politeness was just an all American con job. Most of those shade characters were polite with Church leaders too.

The issue is not lack of politeness but but using hate speech to turn people against each other. The sisters are right on.

The New York Times admitted that their false Russia fake news didn’t work. Now they have turned to another fake news approach, Trump is a racist and so are his supporters. Other major news organizations have followed suit on this false news approach. Now good sisters that is divisive and polarizing. I await your condemnation.

“Conservatives deal with facts and reach conclusions” – Are you utterly delusional? Trump is the worse chronological liars and fact distorters president in the history of America – “In 928 days, President Trump has made 12,019 false or misleading claims”

Can you handle the truth? (“A few good men”), or are you just a blind worshipper of Trump without any honesty left in your “intellectual mind”?

His rhetoric is not divisive? “Build the wall”, “Lock her up”, “Send her home” – The moment I looked at the faces of his supporters chanting “Send her home”, I know that the America that I came to love and respect is dying. However, I’m not giving up as the dear sisters and the authors of this magazine do not give up. I will stand together with them and all people of goodwill and fight to make America “great again”. Since Trump took office, favorable view and respect for America is taking a severe hit worldwide. It is now comparable with Russia and lower than China!!!

Even Murdoch has a second thought about the monster he helped to create...

“…Russia fake news…” – Yes, there may be not enough concrete evidence that Trump campaign actively colluded with Russia even though there were low-level contacts. But the severity of the interference of Russia in the last presidential campaign is not fake. Russian trolls actively tried to impact and influence the direction of the campaign in favor of Trump is quite clear. Trump is so ashamed and embarrassed about this fact that he tried to cover up and make excuse for Russia as much as he can. Everyone with a tiny of honesty and love of this country can see that and should work very hard to not to let it happen again. It seems that Trump administration is downplaying this interference.

Who is the ultimate un-American here? Can you handle the truth or not?
https://www.youtube.com/watch?v=MMzd40i8TfA

Douglas
Wait for it, in short order J Cosgrove will come back with his standby retort of 'thank you for making my point', which is meaningless.
There is no point to trying to engage with anyone who is, as you suggested, so delusional (racism hardly exists in this country don't you know?).

Shayne, Douglas, Thank you for validating my point by not refuting anything. That’s what the thank you’s are for. Why not a question? Only emotions and ad hominems. Maybe a meaningless effort on my part to find the truth but a predicted response.
By the way why don’t the both of you try showing how racism is causing major problems in the US. How better to refute my point. I have never denied certain ethnic groups have extremely difficult lives. The question is what caused this? Clue, it’s not discrimination.

Also which campaign in 2016 hired foreign operatives including Russians to find dirt on their opponents? And why would Putin want Trump president knowing he would cost the Russians over a trillion dollars?

Douglas
You now admit there was not enough evidence to prove Russian Collusion. Yet as I recall you have through the past 18+ months asserted in these very pages that there was obviously more than enough of such evidence for that purpose.
If you check the facts, the total amount of money that Russia invested was about $15 Million as per AdAge Magazine and the Mueller Report .....THAT $15 Million amount is in the context of $1.4 BILLION spent by the Clinton Campaign and $950 Million spent on the Trump Campaign. I would remind you that the Mueller Investigation itself spent over $30 Million.
The real problem involved is that Hillary Clinton could not beat a first time politician whose campaign spent about half of her money; whose campaign had no recognized political support and was ridiculed as inept; whose campaign was opposed by the leaders of his own political party and all four past living Presidents ; and was headed by a a blazing , big mouthed narcissist. The loss to this nouveau politico bozo was simply unacceptable and inexplicable.
So for over two years the Trump administration was characterized by its opponents as illegitimate. because he simply must have/had to / how else could he have won except by the intervention of some outside force......THE RUSSIANS. The same Russians who have been trying to influence every American election for the past 50 years without note and whose activities in 2016 were apparently so inconsequential as to have not required any action on the part of the Obama Administration greater than the verbal reprimand “ Cut it Out!”......So much for for your notation on “the severity of the Russian interference “. Those Douglas are “the facts”....you simply cannot abide “the conclusion”

Although I agree with much of the letter to President Trump, it is conspicuously one-sided.
You must also address the letter to those filled with hatred, especially political women who are sexist racists–those women who constantly berate and denigrate “white men”. Unbridled hatred for President Trump does not help.
Justice is balanced not lopsided. We cannot “pick and choose” and declare that it’s wrong for one person to hate and divide but perfectly fine for another person to do so. That’s “politics” not humane thinking.
What’s the saying? “It takes two to tango.”

Trump must be doing something right if he drives liberals this crazy. Which American citizens are not better off since he was elected? I said citizens because illegals don't belong here.