On abortion, Hispanic and white Catholics differ in their views 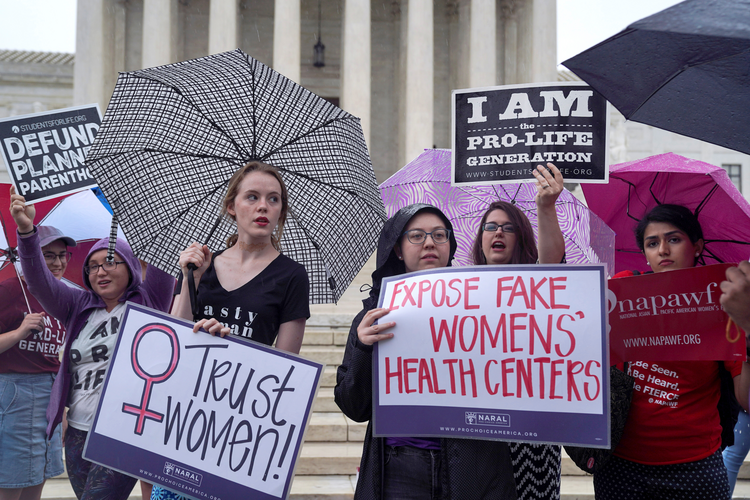 A woman who supports abortion access stands alongside pro-life supporters during a rally outside the U.S. Supreme Court in Washington in June 2018. (CNS photo/Toya Sarno Jordan, Reuters)

WASHINGTON (CNS) -- While a survey of more than 54,000 Americans showed little change in their attitudes between 2014 and 2018 on the legality of abortion, researchers detected movement in many demographic groups, Catholics included.

Catholics "mirror the rest of the country pretty closely, particularly white Catholics," she added. Fifty-three percent of white Catholics believe most or all abortions should be legal compared to 40% who say most or all should be illegal, Jackson noted, "so they're right in line" with the majority of Americans.

However, "when you look at Hispanic Catholics, you're looking at a different picture," she told CNS. "We pull out the Hispanic and Latino population, because they're a distinct group. They're divided heavily by religion and by place of birth. A healthy minority of Hispanics are evangelical, and the PRRI study looked at the attitudes of Hispanics born in the United States, Puerto Rico and Latin America separately.

"The Hispanic Catholics are a good bit different from white and other nonwhite Catholics that look like the rest of the population as whole," Jackson said.

Other nonwhite Catholics support abortion's legality by a 55% to 37% margin, approximating the views of their white co-religionists. But a majority of Hispanics, 52%, believe abortion should be illegal in most or all instances, while 41% hold the opposite view.

Among other nonwhite Catholics, 13% say they've grown more supportive of abortion, as opposed to 9% who say they're now less supportive.

The survey, according to Jackson, did not ask the time frame in which they had changed their views, or the circumstances behind the change. The interview subjects from 2014 are not the same from 2018.

Survey respondents were also asked whether they would vote only for candidates who share their views on abortion. Among those for whom it made a difference, the percentages favored Catholic demographic groups who believe more or all abortions should be illegal.

The Catholic Church teaches abortion is morally wrong, upholding the sanctity of life from conception to natural death.

"Solid majorities of all major religious groups in the U.S. support government-backed health insurance programs covering contraceptives," the survey results said. "Those numbers decline among all religious groups on support for covering abortion, with the considerable variance between only 22% support from white evangelical Protestants and 80% support among Unitarian Universalists."

Support for legal abortion was particularly strong in the northeastern United States -- New York, New Jersey, Maryland, Delaware and the six New England states -- each registering at least 61% support for legal abortion in most or all cases. White Catholics, meanwhile, have their strongest representation in the Northeast, with 20% of its white residents professing to be Catholic, according to PRRI.

"Although a few states such as Alabama and Missouri have recently passed laws that -- should they survive court challenges -- would make abortion illegal with virtually no exceptions," the survey said, "there is no state in which more than one-quarter of residents say abortion should be illegal in all cases."

The survey was conducted by phone between Jan. 3 and Dec. 30, 2018, among 54,357 respondents, 60% of them contacted via cellphone. At least 1,000 interviews were conducted each week. Interviewers asked to speak to the youngest adult living in the household. The margin of error for the total survey is 0.4 percentage points.

More: Abortion / US Church / US Politics

Perhaps a more significant point of this article, is the overall lack of change in attitudes towards abortion. If anyone in the Church pro-life hierarchy is interested in changing attitudes, they might want to examine how the American Bishops' alliance with right wing political groups has diminished their ability to influence those whose hearts might be changed. The glaring hypocrisy of transparently backing the political party which claims to be "pro-life," but which disdains and opposes government programs which assist women with the expenses of unplanned pregnancy and child rearing, leaves the majority suspecting that "pro-life" actually is more about controlling women, than protecting and nurturing children.

The Church’s active and litigious opposition to the Affordable Care Act is a good example. How is a poor family or a single woman supposed to bear the medical expense of having a child, when such expenses are a burden, even for people who have good insurance? How can the Bishops and Cardinals not see that fundamental insecurities related to medical and child care expenses are the kind of real world concerns which lead women to the sad decision to have an abortion? If the Church had spent the money used to fund legal challenges to the ACA, on programs to support women and families receive free or reduced charge medical care from Catholic hospitals, both lives and attitudes would have been changed.

JulieinSeattle---
Your comments are right on point.

Why is it that the most “pro-life” groups are patriarchal institutions and individuals? The Catholic Church and the evangelical religions are blatantly patriarchal. Their alliance with right-wing politicians is reprehensible. Many of these right-wing politicians vote against programs to feed, cloth, and shelter children; and, promote programs that are cruel and selfish.

The nuns used to teach us that one of the worse sins to commit was to bring scandal to the Church. The institutional Church’s current crowning achievement slithers in a sea of scandal with its unholy bond with Trump.

Polls have nothing to do with abortion rights. Roe is not about granting rights so much as prohibiting state governments from asserting power over women absent a congressional finding that legal status occurs at some point prior to viability. Even then, women and their doctors have a due process right against selective enforcement of abortion rules, meaning the police must be empowered to investigate both therapeutic and elective procedures. When you frame the question as whether abortion should be criminalized, even if this requires investigating miscarriages as well, I suspect you would get a different answer.

And this is how rich Republicans and rich Catholics get lay people who are not greatly educated to choose a pro-life stand on abortion. I am 100% politically pro-choice but also nearly 100% supportive that abortion is morally wrong and a sin. Why? Because smart people know these are two different questions which should have two different answers. One is the question: Is abortion moral or a sin? The second question is: Should abortion be a crime whether or not you believe it is, or is not, moral or a sin? The second question is purely a matter of civil rights and laws. Certainly one of the most important questions any voter should ask themselves before they attempt to vote on question two is: Does criminalizing abortion lessen it, by known evidence globally, or increase it? Why would anyone want to pass a law that worsens the problem the law was designed to cure? By the way: all global evidence shows us that making abortion a crime increases abortion, and lends to later term abortions, and more deadly abortions for women while also increasing the maternal death rate overall. This should be a no brainer! Yet, it seems somehow Twain is correct: "No amount of evidence will convince a fool". Isn't that right, Mr. President?

It is not a coincidence that it is the Hispanic population (immigrated from Latin America) that is less likely to support abortion for any reason. These Catholics were raised in countries that led their populations often under Catholic morality based laws. Latin America has some of the most harsh and punitive laws against abortion for both women and providers due to its being heavily Catholic. Latin America also, and not coincidently, has the highest abortion rates by FAR - well above the "supply-on-demand" U.S. - and the highest maternal death rates too. Thanks Pope Benedict XVI, JP II and Pope Francis! You guys are life savers! Well not really or not in actual reality - in fact perhaps you have made yourselves the exact opposite? I wonder who are the murderers now?

Nora
I see you are still distorting the abortion rates and national abortion legality statistics to claim there is “causation” whereas at best there may be some “correlation”. Guttmacher in its abortion statistics on a country by country basis does not claim that there is any “causation” between strict abortion laws and abortion rates. The number of variables at play in each of these countries which would have to be “controlled for” to even test such a claim is so great as to nullify an attempt at doing so.
Nonetheless you brazenly make that fallacious argument with your statement” all global evidence shows that making abortion a crime increases abortion....”. That is pure intellectual dishonesty!

You also pepper your discourse with modifier phrases like..”not coincidentally “ ...”why pass a law that worsens the problem the law was designed to solve.
These are grossly dishonest presentations which even Guttmacher avoids because of the discredit mouthing them would incurr.

The most recent annual poll, May of 2019, provided the following breakdown:

Older Hispanic Catholics and those newly immigrated tend to be more conservative, but that changes when you look at younger Hispanics and the children of immigrants ... they are more liberal. For instance, in the 2018 elections ... "an estimated 69% of Latinos voted for the Democratic candidate and 29% backed the Republican candidate". https://www.pewresearch.org/fact-tank/2018/11/09/how-latinos-voted-in-2018-midterms/
Overall, there is a huge majority in the US in favor of keeping abortion legal.