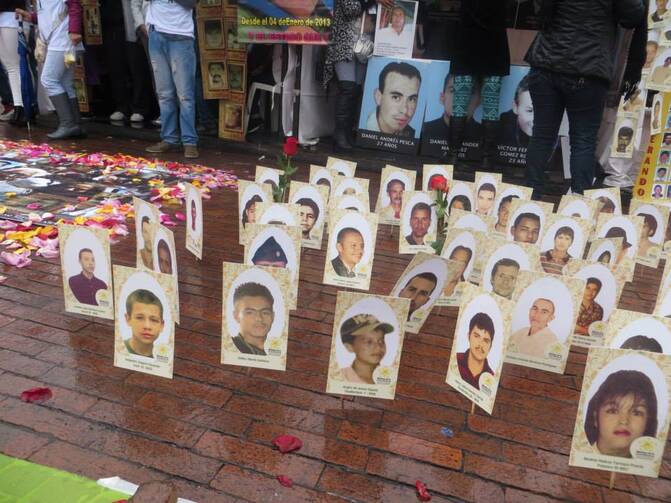 Photo courtesy of Paths of Hope-Mothers of La Candelaria

A series of framed photographs are arranged along the top of a black file cabinet in the center of Teresita Gaviria’s office. She looks over the many faces, frozen in time. Her eyes fall onto the picture of an earnest-looking young man: “That’s my son,” she said.

The only trace that remains of Cristian Camilo is the memory she has of bidding him farewell the morning he left for Bogotá 21 years ago. Colombia’s capital is within a day’s distance by car from Medellín, and making the trip seemed like a small risk at the time. But her son, then 15, never arrived at his destination.

Ms. Gaviria stayed for more than a week in Doradal, the town where he was abducted. Her search for Cristian continues to this day. “There is where my long journey began through all the paths in Colombia, in every road, mountain, city, town—everywhere they told me he could be,” she said. “And we continue to look because I think a mother never stops hoping.”

For some women in Antioquia, a department in northwest Colombia, finding missing family members has become the focus of their lives. Antioquia is one of three regions that reported the highest rates of disappearances during the country’s long civil war as right-wing paramilitaries and other armed groups—left-wing rebels, state military entities and criminal organizations were also responsible for a smaller percentage of these crimes—expanded their presence in the surrounding region.

Progress continues to be slow as local officials do not have the capacity to respond to the high number of investigations, and some families of disappeared persons remain wary of collaborating with authorities.

Expectations were high in 2016 when the government signed a peace accord with the primary rebel force, the Revolutionary Armed Forces of Colombia, known by its Spanish acronym, FARC. The peace terms included the establishment of a truth commission, a team to investigate war crimes—the Jurisdicción Especial para la Paz or J.E.P.—and a unit to search for disappeared persons. But resolving thousands of missing persons cases remains a daunting challenge.

Progress continues to be slow as local officials do not have the capacity to respond to the high number of investigations, according to a Red Cross report, and some families of disappeared persons remain wary of collaborating with authorities. Although overall violence among armed groups has fallen, as in other departments of Colombia, insecurity remains a problem in Antioquia’s municipalities. The Red Cross reports that disappearances continue.

Victims’ families, like Ms. Gaviria, face their own risks when they try to raise awareness of these cases. Ms. Gaviria was fired from her position at Atanasio Girardot stadium after she spent several weeks searching for her son when he was abducted in 1998. With his photo in hand, she sought assistance from various federal agencies without success.

A year after her son’s disappearance, she founded Paths of Hope-Mothers of La Candelaria, bringing together other women who were looking for answers on missing persons cases. They continue to demonstrate every Friday outside the steps of the oldest church in Medellín, the Basilica of Our Lady of Candelaria.

It became the only location where the mothers were permitted to gather as they chanted their desire for the return of their family members—“alive, free and in peace.” The movement was inspired by the Mothers of the Plaza de Mayo, who similarly protested disappearances under the military dictatorship in Argentina. Just like them, the Mothers of La Candelaria find solace in their communal struggle.

Throughout the years, this group of women has also learned to rely on themselves. During a panel discussion last year, Ms. Gaviria said that the hardest thing was convincing an “enforcement entity to listen” to them. But it also deepened Ms. Gaviria’s determination, even if that meant confronting armed actors on her own. “All of us are involved in this because it’s not just a problem for the victims; it’s a [universal] issue,” she said.

Medellín experienced a number of legal inquiries into the disappearances over the past decade, including one conducted by the Inter-American Commission on Human Rights. Under this pressure, in 2015 “La Escombrera,” the largest dump site in Medellín—believed to double as a mass grave—was partially excavated, but no bodies were found.

The local government in Medellín, however, said it is continuing to work with national entities to resolve pending cases. Ms. Gaviria handed over all the case files collected by her organization to the three federal agencies as part of the peace agreement. She also relays information to government investigators on possible sites for exhumations as she learns of them from residents in the community.

Francisco de Roux, S.J., who leads Colombia’s truth commission, said the commission continues to cooperate with victims groups, including the Mothers of La Candelaria, to find some resolution to the disappearances. Although there is still fear, Father de Roux told America these organizations are helping advance reconciliation in Colombian society.

The Basilica of Our Lady of Candelaria became the only location where the mothers were permitted to gather as they chanted their desire for the return of their family members—“alive, free and in peace.”

“At the same time that they’ve asked for the truth and the clarity of [what happened] to their children, they have been speaking directly with the perpetrators,” he said. “[And] if there is truth, they are willing to offer forgiveness.”

Years ago, a transitional justice law provided a sense of closure to some families. Ex- paramilitaries who were accused of major offenses during the conflict were allowed to confess to their acts as part of the peace agreement in 2006 with the government. The testimonies provided some consolation to family members who were able to face those responsible for these crimes.

Luz Maria Zapata Taborda’s husband went missing in 2005. An ex-paramilitary chief testified during the trials that her husband, a topographer constructing a pool at a ranch outside the city, was murdered. The paramilitaries had been seeking vengeance against the landowner after he refused to pay their monthly extortion fee.

“He was at the wrong place at the time when they came,” Ms. Taborda said. “But that’s because I found out, but the public prosecutor’s office doesn’t tell you anything, you have to take [charge] of the case and try to find out through your own means.”

Her husband’s body was recovered almost four years ago after the ex-paramilitary commander provided the exact location of his burial site. Ms. Taborda, who participates with the Mothers of La Candelaria, said investigators with the public prosecutor’s office now collect DNA samples of all the women in the group so they can be matched to remains that are discovered. It is an achievement she credits to the visibility of the organization.

Their efforts are also credited with helping to establish forced disappearances as a specific offense in the Colombian penal code and a crime against humanity. Ms. Gaviria was also present at the peace talks in Havana, where she advocated for deeper concessions from FARC on missing person cases.

“I used to walk the streets of Medellín on my own,” said Lourdes del Zocorro Zapata, another member of the Mothers of the Candelaria whose son went missing in 2007. “I suffered a lot in that time because I didn’t have any counsel until I met Teresita.”

Today, the organization has helped recover 111 missing persons. They are now waiting to observe upcoming hearings with former armed actors for any information that could provide closure to other families. And while these days they are able to accompany investigators at these burial sites, Ms. Gaviria has led search groups with gloves in hand through the Magdalena Medio region, an area in East Antioquia where mass graves have been found.

As part of a larger reconciliation agenda, the group of mothers are also coping with their loss through healing workshops, but many, including Ms. Gaviria, struggle to move on from these experiences.

More than a decade ago, Ms. Gaviria discovered that her son’s disappearance was a result of forced recruitment gone wrong. An ex-paramilitary combatant told her that they were following orders from a commander when they dumped his body in the Magdalena River.

Ms. Gaviria has in the past made the trip to the river on her own, but because of a recent threat she now comes with security guards. Despite the risks, she plans to continue to look for Cristian and others along its shoreline.

Until then “we don’t have a tomb where we can cry, to place flowers and to put a cross because they are still disappeared,” she said. 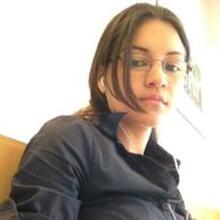 Raisa Camargo is a freelance journalist based in New York.

No mention that nearly all the photos are of males. Little discussion of the forced recruitment that leads to the deaths of the missing.