The Editors: The integrity of the election process is at serious risk. 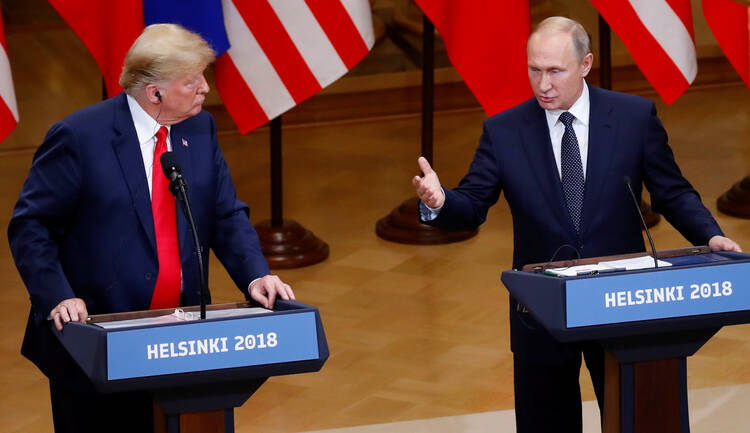 During his congressional testimony, former Special Counsel Robert S. Mueller III warned that not only had Russia interfered with the American election process in 2016, but “they’re doing it as we sit here.” That chilling moment should have focused the attention of all Americans, but unfortunately, the legislators in the hearing room barely paused to register it.

With little more than a year until the next presidential election, we are learning that the integrity of this system is more at risk than many of us had supposed.

The questions of whether President Trump encouraged Russian interference in the 2016 campaign or obstructed an investigation into election security are certainly relevant—and members of Congress have a duty to pursue these questions, no matter how much the president levels blind attacks against them—but restoring public trust in the way we elect our political leaders is the more immediate task. With little more than a year until the next presidential election, we are learning that the integrity of this system is more at risk than many of us had supposed. (The Senate Intelligence Committee has concluded that election systems in all 50 states were targeted by Russia in 2016 and that other nations also are developing the capacity to change electronic election results.) We remain in the dark about precisely what Mr. Mueller was referring to in his warning about “doing it as we sit here” and can only hope that members of Congress have shown more curiosity about the specifics in closed-door briefings than appeared on C-Span.

Whatever the specifics of Russian interference, whether it is spreading disinformation or hacking voting systems, it is clear that our political leadership needs to act with a speed and unity that it has rarely shown in recent years. In these pages we have often voiced disappointment over the inability of the executive and legislative branches to come to bipartisan agreements on immigration reform, tax reform, health care and climate change, but the integrity of our elections is not an area where partisan differences should be an obstacle.

The integrity of our elections is not an area where partisan differences should be an obstacle.

The House of Representatives has passed election-security legislation that includes $600 million for new voting equipment, along with national requirements that voting machines stay disconnected from the internet and produce paper records, but the Republican leader of the Senate, Mitch McConnell, has refused to allow votes on the proposals authored by Democrats and has not proposed alternative measures of his own. Mr. McConnell reportedly objects to being painted as someone unconcerned with election security, arguing that it has always been the responsibility of the states to administer elections. But the determination of who will occupy the White House and which party will control Congress is not a purely local concern, and it is reasonable for all U.S. citizens to be concerned about the security of every vote that will help make that determination.

The states themselves do not have to wait for Congress to act. Some are already moving on their own to better secure elections. Georgia, for example, recently mandated that touch-screen voting machines also produce verifiable paper ballots. Even better, a bipartisan national commission on election security or a public summit of all the secretaries of state would be steps toward restoring confidence in our electoral system.

In demanding action, we risk deepening doubts over the results of the next presidential election should security not be improved or guaranteed by then. That is a risk we have to take. It is an act of faith that our republic is still capable of responding effectively to an existential threat to our democratic processes.

There is a simple means to ensure security. Use paper ballots that are then read optically by a machine. That is how I voted in New York for the last 25 years. The paper ballots are kept for a fixed amount of time and could be easily used for a recount.

Everyone should be in favor of election security. Nevertheless, I have not read or heard of a single instance where a single voter changed his or her mind on who to vote for as a result of "Russian interference." I find it odd that publications such as the Sunday New York Times Magazine and Bloomberg Business Week periodically take multi-page advertisements paid for by the governments of Russia and mainland China. These advertisements extol the progress and wisdom of their political leadership and their "bullish" outlook for their respective country. (Sorry for using that capitalist term). I guess propaganda is in the eye of the beholder. America Magazine recently ran a feature story by a young author who the magazine employed on the wonderfulness of Communism, so why should anyone worry about what gets published under the mantle of freedom of the press? Who was that Pope from Poland anyway?

James Schwarzwalder---
I agree, probably nobody changed their vote. The issue is not whether a voter changed his or her mind on whom to vote for due to Russian interference The issue is the voter voted for X, but the machine would often record the vote as being for Y.

I don't recall the Mueller investigation or the press reporting any evidence of changed votes internal to the voting process itself. I seem to recall attempts by adversaries (the Russians?) to penetrate voting rolls in some states, that is, identifying those who were registered to be able to cast a vote. The allegation of "collusion" between the Russians and the Trump campaign was unproven according to Robert Muller. So the USA lucked out in this election. Since most of the alleged nefarious activities supposedly occurred before election day, why was the Obama administration so quiet regarding events that took place under the Obama Administration's watch? I recently heard an NPR radio broadcast on a recently published book on Lyndon Johnson. The author, Robert Caro (4 volumes on LBJ) provided evidence that Johnson was complicit in activities that "stole" an election resulting in Johnson going to Washington D.C. Not much new under the sun.

Might as well label this magazine The America Democrat Review. All articles are slanted towards the Democrat viewpoint. The Russian interference is a farce - didn't anyone inform these editors that everyone does it? America has actually been responsible for the overthrow of governments, which often comes back to haunt us. The biggest threats to our election integrity are the liberal social organs that censor thought in favor of liberalism. Nobody even mentions the fact that the Democrats have tried to invalidate the last election, using every legal and illegal means possible. When the whole truth is laid bare any faith we have in American politics will vanish, the same way that trust has evaporated in the hierarchy of our Catholic Church. At the moment there is a chance that the State we live in provides a fair election process, thanks to a Constitution that allows elections to be a State right. God help us if that also became subject to the liberal coastal majorities to ensure liberalism forever. In the meantime we blame the President for every act of gun violence, while our church, bereft of moral authority says almost nothing about the real cause of social unrest - sixty years of feel good liberalism, shattered families, pornography at the push of a button, the closure of Catholic schools.

Obstructing an investigation? Editors of this socially “woke” opinion magazine need our prayers.

Editors
Interesting....Mueller says that the Russian problem was/is acute. Yet while it was going on during 2016 and the US Intelligence was fully aware of it, the only reaction of the Obama Administration was for the President to tell Putin : “Cut it Out!”!!!.......no cyber response; no booting out of Diplomats until after it was over; “no nothing “. So if there are doubts about the last election where does the blame attach?