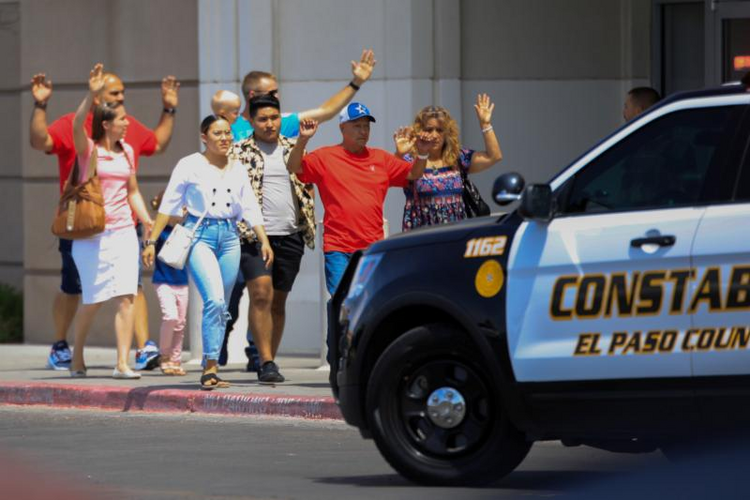 Shoppers exit with their hands up after a mass shooting at a Walmart in El Paso, Texas, Aug. 3, 2019. (CNS photo/Jorge Salgado, Reuters)

WASHINGTON (CNS) – The Catholic dioceses of El Paso, Texas, and neighboring Las Cruces, New Mexico, have joined in prayer after an August 3 mass shooting in a mall left several dead and many injured.

"Our prayers are with our neighboring city of El Paso and everyone affected by the active shooter situation near Cielo Vista and Walmart," tweeted the Diocese of Las Cruces the afternoon of Aug. 3. "We ask our Las Cruces community to unite in prayer at this difficult time."

The two cities are less than 50 miles from one another.

By early evening, authorities said 20 people died and another 26 were injured in the shooting rampage in a crowded Walmart Supercenter at the Cielo Vista Mall in El Paso. New reports said the alleged shooter has been identified as Patrick Crusius, 21, of Allen, Texas, and was taken into custody without incident.

The Diocese of El Paso also asked for prayers as the situation unfolds.

The nonprofit Hope Border Institute of the El Paso Diocese asked anyone who could do so to donate blood at a center in the city. It also gave local directions via Twitter for those looking for loved ones believed to have been in the area.

In Washington, the president of the U.S. Conference of Catholic Bishops and the chairman of the USCCB domestic policy committee said that "as people of faith, we continue to pray for all the victims, and for healing in all these stricken communities," but they said the Texas shooting a week after a California shooting shows "something remains fundamentally evil in our society."

After the Gilroy shooting, a former army chaplain responds to a community in mourning
Kevin Clarke

Sad, tired and angry: A prayer in the face of gun violence
James Martin, S.J.

"Something remains fundamentally evil in our society when locations where people congregate to engage in the everyday activities of life can, without warning, become scenes of violence and contempt for human life," they said, calling gun violence a "plague" that "continues unchecked and spreads across our country."

"Things must change. Once again, we call for effective legislation that addresses why these unimaginable and repeated occurrences of murderous gun violence continue to take place in our communities," Cardinal DiNardo and Bishop Dewane said in a statement.

News reports said police were looking at the alleged shooter's social media accounts to see if they could find a motive for the shooting.

I am all in favor of prayer, but it doesn't seem to have made a dent in this problem. After all, there are many conservative Christian churches and organizations that continue to support gun ownership rights.

Dioceses of Texas has been operating well with little to conside....

Semi-automatic rifles that rapidly fire high velocity bullets that tear apart the innards of their victims. These have to be totally banned from private ownership. In the span of a minute, over a dozen casualties? This dream of death has gone mimetic. The US is a lunatic asylum festooned with military weapons. People will be afraid to gather for celebration. The Age of Grendel. People will be afraid to even shop. I guess this will be a boon to Amazon.

In the past 48hrs, the USA horrifically lost 34 people to mass shootings. On average, across any 48hrs, we also lose 500 to Medical errors 300 to the Flu 250 to Suicide 200 to Car Accidents 40 to Homicide via Handgun
Often our emotions respond more to spectacle than to data
DeGrasse Tyson

Yes, spectacle and emotions are the norms in today’s reporting.

They are all deaths before their time and the person dying is surely not going to say they don’t care because it was an accident. Many theoretically preventable. Why does the manner make a difference?

I never saw such a more ridiculous, ignorant, and utterly nonsense excuse from someone who seems to always consider himself as a "knowledgeable" person! By the same argument, why bother fighting the Islamic militants with the cost runs into trillions as they have killed a far less number of Americans, including the 9/11 event!

There is a risk analysis with items society uses. Most of the above mentioned items cars, medical, drugs, etc. have a an overwhelmingly positive use. They assist millions of more people than they harm. There is no reasonable need or use for an individual to have military weapons so they should be banned from the public.

If the answers are NO, as they appear to be, then the world is in trouble, and the country is in deep trouble.

May God, the divine and eternal comforter and consoler, comfort and console the families of the dead. May the souls of the dead rest in heavenly peace and, in the bosom of our Lord Jesus Christ. May God comfort us all. May God bless America.