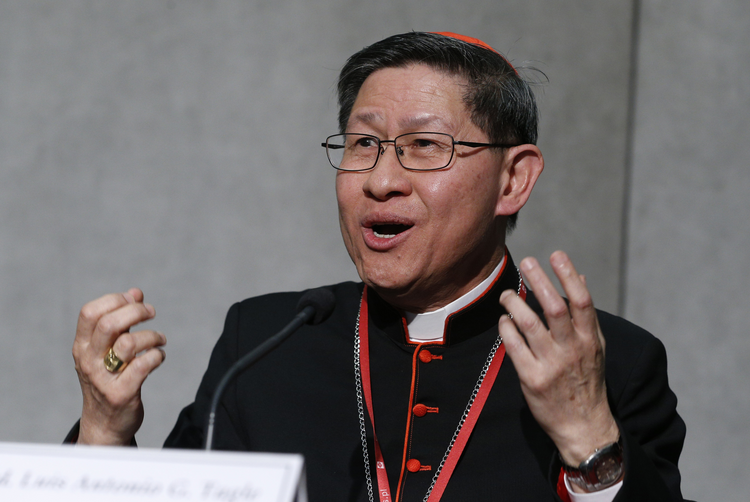 About 3,000 church workers, students and parishioners from the Archdiocese of Lingayen-Dagupan on July 31 carried placards with messages expressing support for Archbishop Socrates Villegas and other accused church leaders during a July 31 prayerful demonstration, ucanews.com reported.

The country's Justice Department is set to open a preliminary investigation the week of Aug. 5 into sedition and cyber libel charges against the leaders, which other than Archbishop Villegas include Bishop Honesto Ongtioco of Cubao, Bishop Pablo Virgilio David of Kalookan, and retired Bishop Teodoro Bacani Jr. of Novaliches.

At least 36 other people also were charged for allegedly orchestrating a series of online videos alleging that Duterte and his family members were involved in the illegal drug trade.

The bishops’ conference has called the allegations "beyond belief."

Speaking during a Mass before the July 31 prayer march, Auxiliary Bishop Fidelis Layog of Lingayen-Dagupan called on Catholics to stand up for truth, justice and human rights.

"We are doing this not only for (them) but also for others who are maligned and persecuted, whose human rights are crushed to the ground," he said.

"(We) fervently stand with Archbishop Villegas and other bishops who are being persecuted and falsely accused for standing up against malicious insults to truth, justice, and freedom," read a statement released by the archdiocese.

The marchers later called on law enforcement authorities to drop the charges as they lit candles in front of the city's St. John the Evangelist Church, where they celebrated the Eucharist.

The archdiocese appealed to Catholics across the country to offer their support.

Cardinal Luis Antonio Tagle of Manila Aug. 1 issued a call to the clergy and Catholics in Manila to offer Masses and prayers Aug. 4 for those suffering because of "persecution and false accusations."

"Let our prayers be the best expression of our solidarity and fraternal support for them," read a letter sent to clergy and religious men and women of the Manila Archdiocese.

Father Reginald Malicdem, archdiocesan chancellor, said Cardinal Tagle had urged people to be "aware and discerning" toward the "many disturbing issues" in society.

Attached to the circular was a "Prayer for the Nation," which Cardinal Tagle asked to be recited during weekend Masses throughout August.

In a statement read by Msgr. Manuel Bravo, Archbishop Villegas thanked Catholics in his archdiocese for their love and prayers. "Your love is so powerful," he said.

The prelate said, according to ucanews.com, that while he always knew and understood that the priesthood is a sacrifice, he never imagined that he would be accused of sedition.

"The good Lord knows I am innocent of the crime they charge me with," Archbishop Villegas said.

"Thank you for the many assurances that you believe me when I say so. If the process will be fair and truthful, I know the authorities will see it too," he added.

"My fire comes from the spirit of the Gospel, not from a subversive heart," the archbishop continued. "I am not a political troublemaker; my duty is to disturb cold consciences."