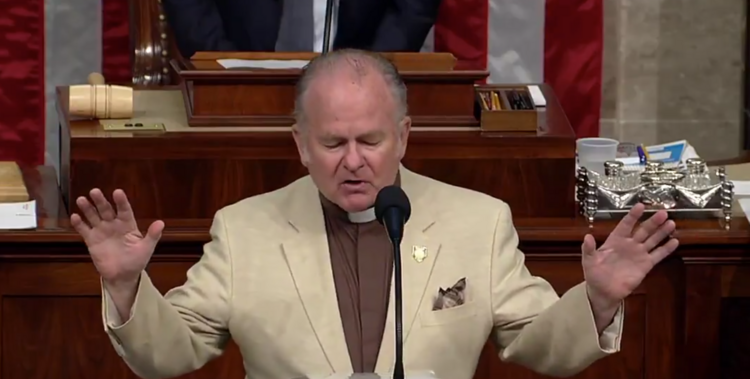 Congress remains deeply unpopular, but might the U.S. Capitol also be demonic?

One might be forgiven for thinking so, especially after listening to Thursday’s opening prayer from House Chaplain Patrick Conroy, S.J.

“This has been a difficult and contentious week in which darker spirits seem to have been at play in the people’s house,” Father Conroy said, before closing his eyes and lifting his hands in prayer. “In your most holy name, I now cast out all spirits of darkness from this chamber, spirits not from you.”

House Chaplain Pat Conroy’s opening prayer: "This has been a difficult and contentious week in which darker spirits seem to have been at play in the people's house. In Your most holy name, I now cast out all spirits of darkness from this chamber, spirits not from You." pic.twitter.com/DleRYUtLWV

As CNN noted, the prayer is reminiscent of a former version of the Catholic rite of exorcism, which Father Conroy said was the point.

“I was on the House floor on Tuesday,” Father Conroy told CNN, adding that “it felt different than other days. It felt like there was something going on beyond just political disagreement. The energy of the House was very off. No one was relishing what was happening.”

During the prayer, the Jesuit priest sought to “cast out the spirit of discouragement which deadens the hope of those who are of good will. I cast out the spirit of petty divisiveness which clouds the sense and the desire to be of fruitful productivity in addressing the issues more appropriately before this House. I cast out any sadness brought on by the frustration of dealing with matters detrimental to the honorable work each member has been called to engage in.”

Father Conroy asked God to “anoint your servants here in the House with a healing balm to comfort and renew the souls of all in this assembly.”

“May your spirit of wisdom and patience descend upon all so that any spirit of darkness might have no place in our midst. Rather, let your spirit of comity, of brother- and sisterhood, and love of our nation and of all colleagues in this chamber, empower our better angels to be at play in our common work to be done for the benefit of all your people,” he said.

This is not the first time Father Conroy’s prayers have made news. In April 2018, then-Speaker of the House Paul Ryan, a Catholic from Wisconsin, tried to fire the Jesuit from his post. Mr. Ryan said at the time that the firing was not political, instead prompted because he had received a number of complaints from members of Congress about Father Conroy’s performance.

But Father Conroy told the New York Times in 2018 that he was told by a congressional staffer that his prayers had become too political. With strong protestations from congressional Democrats over the firing, Father Conroy was allowed to keep his job and the Democratic-controlled House voted to reappoint him to the position in 2019.

The prayer came just hours before 70 Catholics, including several Catholic sisters and at least one Jesuit, were arrested inside the U.S. Capitol following a protest over how immigrant children are being treated at the U.S.-Mexico border. Tension over immigration has been high in recent months, and rhetoric rose to a new level this week after President Trump tweeted on July 14 that four members of Congress, all women of color, should “go back” to where they came from if they do not like the United States. Three of the lawmakers were born in the United States, and the fourth is a naturalized citizen. On July 16, the House of Representatives voted to condemn the president’s tweets, which is when, Father Conroy told CNN, he wrote the prayer.

Father Conroy told CNN that his prayer on Thursday morning was aimed at all members of Congress, not one particular side.

“You heard it. I wasn’t picking sides,” he said. “That’s ultimately the goal every day. I want every member of the House to be able to say ‘amen.’”

May his prayers be efficacious given the hate, anti-Semetic, and loathsome comments by the majority within the US House under Democrats.

U.S. Rep. Ilhan Omar proposed a resolution this week supporting the right to boycott Israel, likening the boycott of the Jewish state to boycotts of Nazi Germany and the Soviet Union.

But the resolution will likely lead to yet another clash with her fellow Democrats who are mulling a resolution condemning the boycott movement.

"Rep Omar's resolution seeks to push back against US laws banning the boycotts of Israel and affirms the right of Americans to organize boycotts of foreign countries ,if they so wish[Fox]".
And what's wrong with that?Are US citizens obligated to buy Israeli products? The resolution does not call for a boycott but for our right to boycott. .Considering laws have been passed restricting Americans' rights to choose their boycotts , a resolution protecting our economic free speech does not seam unreasonable .She was not COMPARING Israel to Nazi Germany .She was presenting our HISTORY of boycotts[ I know nuance and reality are hard when you have an agenda] including of Nazi Germany due to their persecution of Jews!How anti Semitic can you get!
The resolution is push back AGAINST anti Semitism; the hate, and loathsome and anti Semitic laws enacted to hinder Americans' expressions of solidarity with Semitic Palestinians

Criticism of Israel is not the same as antisemitism. Surely that is obvious.

May his prayers also touch the hearts of America Magazine readers so our comments don't fuel divisiveness and discord.

Boycotts are Constitutionally protected speech. Boycotts are an effective means of peaceful protest. Israel is a political state. Criticism of Israel is not criticism of the Jewish people as many Jewish, Muslim and Christian Israelis will tell you.

And what is wrong with having the right to boycott foreign countries? Do you believe in compelling trade? How weird.

Since the boycott of Nazi Germany was against a country that killed Jews by the millions, why would you oppose that? The right to boycott belongs to the individual.

Didn't Netanyahu come out in favor of a one state solution? Should we boycott him?

I forgot to ask, what anti-Arab comments were made?

I forgot to ask, what anti-Arab comments were made?

Didn't work. McConnell is still there.

I am greatly dismayed that the three comments thus far reveal nothing more than partisan politics. It's sad that neither the right nor the left can take a moment or two to first of all, pray this prayer and secondly, do a personal examen to see where the forces of darkness might be at work in our own lives.

First, I want to thank House Chaplain Fr. Patrick Conroy, S.J for this prayer. May God bless you, Fr. Patrick Conroy, S.J. I will like to share a recent experience and why for some time in the country we have been unable to genuinely and sincerely pray, and why we have replaced prayer and faith with our political party, culture, race and ethnicity. Recently, I shared with my friend who is Catholic and religious how a particular parish put the campaign materials of a particular politician and political party in the week’s Church bulletin during the 2016 election. I told my friend that I found it objectionable that a Catholic parish would do that. I said that I would think it is normal for a section of the evangelical church to do that because the leadership of that church(the evangelical) has officially turned their church(evangelical church) to one of the campaign offices of their preferred political candidate and political party-Mr. Donald J. Trump’s candidacy and Mr. Donald J. Trumps' Republican party. The leadership of the evangelical church said so. They do not hide it.

In response, my friend who is religious said “I do not discuss politics.” I said if you do not find it objectionable that a parish of the Catholic Church, of which you are a religious inserted the campaign material of a political party in the Church bulletin, then that is political-you have taken a political decision, you have decided to politically look the other way because you are comfortable with that party. It is not wrong that you have a political view and you support a particular party for whatever reason, (we all do and are expected to do as a civic responsibility) but do not hide it. Do not screen it. It is wrong for a parish to put the campaign materials of politicians and political party in the Church’s bulletin. It is offensive because parishioners belong to different political parties, and the Catholic Church is not the campaign arm of a party. My friend knew that I exposed his hypocrisy, duplicity and complicity. He was not happy.

I think 'love of our nation' are his most important words. This freshman class doesn't seem to have much respect for much of anything, including Congress itself. They don't want to play by the rules, which are focused on seniority and the requirement of freshmen to vote the way the House Speaker wants them to vote on certain issues in exchange for slipping district-favored proposals into other bills as reward. Clearly, the freshmen don't want to play by those rules. They're trashing the very institution to which they were elected. Nor do they want to play by any other rules. Boycotting Israel is essentially boycotting our Judeo-Christian heritage. This is far scarier than Russians trying to defeat Hillary via Facebook.

Israel is a political state. Criticism of Israel is not criticism of the Jewish people as many Jewish, Muslim and Christian Israelis will tell you. Boycotts are Constitutionally protected speech. Boycotts are an effective means of peaceful protest.