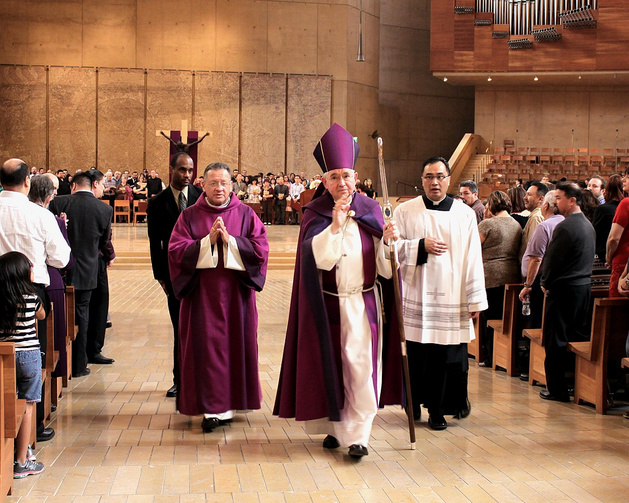 LOS ANGELES (CNS) -- Using social media, preaching, newspaper columns and letters read at Mass, the Los Angeles Archdiocese and California's other Catholic dioceses planned a special push over the June 15-16 weekend asking Catholics to urge their representatives in the state Assembly to reject a confession bill.

S.B. 360 -- which passed in the California Senate May 23 in a 30-2 vote -- would force priests to disclose information about child sexual abuse that they learn when they are hearing another priest's confession or when hearing the confession of a co-worker.

The bill is expected to have a vote in the lower house, the California State Assembly, in September.

"Our lawmakers have good intentions. They want to prevent child abuse," Los Angeles Archbishop Jose H. Gomez said in a letter he issued June 10 that is to be read at all June 15 and 16 Masses in the archdiocese. "But there is no evidence that this legislation will do that. Instead, it threatens a practice that is essential to our faith and religious identity."

"We need your help to protect this sacrament of the church and to keep confession sacred," he said. "And we need to continue our commitment to building a society where every child is loved, protected and safe."

The Catholic Church in California set up a new website, KeepTheSeal.com, which is a hub that gives people easy access to materials about S.B. 360 as well as a way to send emails to their legislators.

As it is in many U.S. states, California requires priests, teachers, social workers, doctors and other professionals to be "mandated reporters." That means by law they are required to report any case of suspected abuse to authorities.

There is currently an exemption in California law for any clergy member "who acquires knowledge or a reasonable suspicion of child abuse or neglect during a penitential communication."

For Catholics, that penitential communication would be in the confessional.

"The sacrament of penance and reconciliation, what we call confession, was the first gift that Jesus gave to the world after rising from the dead," Archbishop Gomez said in his letter. "On the first Easter night, he breathed his Holy Spirit into his apostles, his first priests, and he granted them the awesome power to forgive sins in his name.

"Jesus gave us this gift so that we could always come to him, personally, to confess our sins and seek his forgiveness and the grace to continue on our Christian journey."

Catholics confess their sins not to a man but to God -- the priest "stands in the place of Jesus," he said, and the confessor's words are "addressed to God."

"That is why the priest has the sacred duty to keep the seal of the confessional and never to disclose what he hears in sacramental confession for any reason," Archbishop Gomez added. "This ancient practice ensures that our confessions are always intimate communications with Jesus alone."

He added, "We cannot allow the government to enter into our confessionals to dictate the terms of our personal relationship with Jesus. Unfortunately, that is what this legislation would do."

As S.B. 360 made its way through the Legislature, the California bishops urged lawmakers to strengthen and clarify mandated reporting requirements while maintaining the traditional protections for "penitential communications."

Before the measure went to the Senate floor, lawmakers "accepted several of the church's recommendations to strengthen mandated reporting requirements for clergy," as Archbishop Gomez noted in a May 20 statement.

But in the end he and other Catholic leaders were "deeply disappointed" by passage of the measure because under it priests would still have to break the seal of confession to disclose information about child sex abuse heard in the confessional.