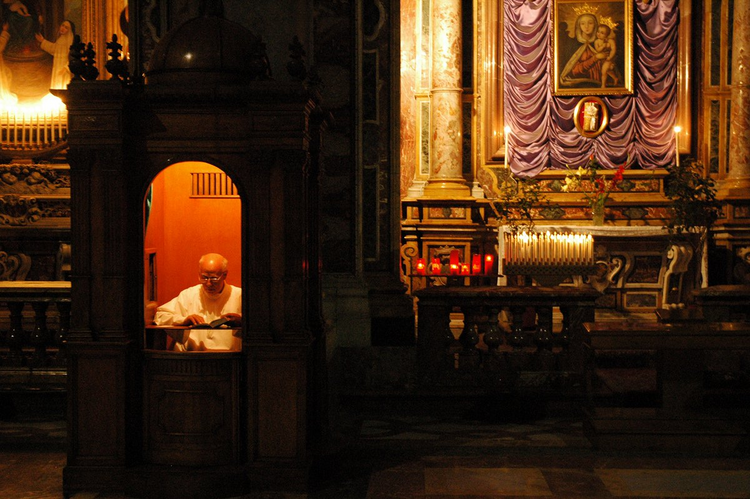 A priest reads inside a confessional. Photo by Emilio Labrador/Creative Commons

(RNS) — Breaking with a long tradition of clerical privilege, California is edging toward requiring priests and other church employees to inform authorities if they learn of a case of child sex abuse during the sacrament of confession.

On Thursday (May 31), the California State Senate passed a bill that would require priests to report child abuse if they learn about it while hearing the confession of a fellow priest or colleague. The bill — which passed overwhelmingly with a 30-4 vote, with 4 not voting at all  — was amended from its original version, which would have required a priest to report abuse they learn about in any confession they hear, not just those of their fellow clerics and coworkers.

But even the altered version of the bill is sparking outrage among Catholic leaders who see it as forcing priests and other clergy either to comply with the law and violate the sacramental seal of confession or defy authorities and risk arrest.

The California Catholic Conference decried the bill in a statement, describing it as an “attack on the sanctity of the confessional” and noting that under church law, any priest who violates the seal of confession is automatically excommunicated.

In a separate interview with Religion News Service, a spokesperson for the conference argued that the narrowing of the bill only sharpens opponents’ argument that it violates religious freedom provisions and is discriminatory.

“The more you narrow it down, the more unconstitutional it gets,” the spokesperson said.

The spokesperson added that, while Catholic officials won’t prepare any legal challenges before the bill passes in California’s lower chamber, they wouldn’t rule out potential future lawsuits.

Bishop Michael Barber of the Diocese of Oakland, Calif., also forbade any priests in his region from obeying the bill, which was sponsored by State Senator Jerry Hill, if it becomes law.

“(Y)our right to confess to God and have your sins forgiven in total privacy must be protected,” Barber wrote in a letter released on Tuesday.

The Editors: A threat to the confessional seal anywhere is a threat to it everywhere
The Editors

“SNAP supports any effort that will help keep children safe, and SB 360 is one step in that direction,” said Hiner.

“We welcome any effort that would result in increased transparency and involvement of law enforcement. In California, clergy members are mandated reporters and we believe that they can and should report suspicions of abuse to police, regardless of where or why those suspicions arose,” Hiner said.

The disagreement taps into a more than decade-old debate over similar provisions that have been passed or discussed in other states since at least 2002 and stands to grow as Americans continue to grapple with the Catholic sex abuse scandal.

At the heart of the dispute is so-called “clergy-penitent privilege,” which is similar to the concept of confidentiality between patients and doctors or lawyers and their clients. The privilege has a complicated history but has been bolstered by various court decisions and judges. In 1980, U.S. Supreme Court Chief Justice Warren E. Burger wrote that clergy-penitent privilege “recognizes the human need to disclose to a spiritual counselor, in total and absolute confidence.”

Christian thinkers, however, have cautioned that the issue isn’t always black and white. In a 2015 essay in the National Catholic Reporter, Jesuit priest and RNS commentator Thomas Reese pointed out that canon law experts differ over whether a priest can be “released” from the seal of confession by the person who confessed to them, with many insisting they can be unbound.

A 2015 report from the Child Welfare Information Gateway — a project of the Children’s Bureau, a federal agency — listed several states and U.S. territories that already appear to require clergy to report child abuse regardless of where they hear about it. Those regions include Guam, New Hampshire, North Carolina, Oklahoma, Rhode Island, and Texas.

“The requirement to report (child abuse) under this section applies without exception to an individual whose personal communications may otherwise be privileged, including an attorney, a member of the clergy, a medical practitioner, a social worker, a mental health professional, an employee or member of a board that licenses or certifies a professional, and an employee of a clinic or health care facility that provides reproductive services,” reads a portion of the Texas family code.

As the Catholic Church sex abuse scandal was revived last year in the United States, Washington, D.C., Attorney General Karl Racine’s office reportedly considered ending the district’s exemption for confidential conversations for any mandatory reporters. But the final proposal to the D.C. city council — which is still pending — retained a confession carve-out.

In some ways, the California bill brings the debate full circle, as the Golden State arguably created the concept of a confession carve-out for mandatory reporting to begin with. When the state legislature passed a trailblazing law in 1990 that listed clergy as mandated reporters, it specifically exempted “penitential communication,” or conversations in which a faith leader “has a duty to keep those communications secret.”

When states began passing similar mandatory reporter laws in the aftermath of the 2002 Boston Globe report documenting widespread child sex abuse by Catholic clerics, many legislatures appeared to model their bills after existing California law — including its carve-out.

Such exemptions were hotly debated at the time. Nancy S. Taylor, then president of the Massachusetts Conference of the United Church of Christ, reportedly urged state lawmakers in 2002 to oppose such a carve-out, saying, “While upholding confidentiality as a general principle, it should not be used to protect criminals, or criminal behavior, at the expense of innocent victims.” The state passed the law with the exemption anyway.

Meanwhile, the carve-outs continue to be the subject of legal disputes. In 2009, the parents of a 14-year-old girl who alleged that her priest failed to act when she informed him during confession that an older parishioner had molested her sued the Diocese of Baton Rouge, in Louisiana. The diocese fought back, pointing to a stipulation in the state’s Children’s Code that a religious leader is not required to report child abuse if it is revealed during church-sanctioned “confidential communication” and the priest refused to testify.

The case remained embroiled in the courts until 2016, when the Louisiana Supreme Court ruled that “confidential communication” was, in fact, protected by the state law but pushed the case back to the lower courts to decide whether the girl’s conversation with the priest constituted a confession. That case was ultimately thrown out in 2018.

On the other side of the globe in Australia, parts of the country are passing laws that would require religious ministers who hear an allegation of sex abuse to report it even if they learn about it in the context of confessional. In the Australian Capital Territory, clerics who fail to report could face up to two years in jail.

Catholic leaders have vigorously opposed the change, but Australia’s shift on the issue comes in the wake of a scandal involving Cardinal George Pell, Pope Francis’ top financial adviser. Pell was convicted earlier this year of abusing two 13-year-old boys in the 1990s. The Vatican opened its own investigation into Pell days later, which could lead to the cleric being defrocked.

The California bill now moves on to the state assembly, where it must pass through committees before it receives a floor vote.

You guys couldn't or wouldn't take care of your problems so the state needs to now be the grown-up in the room and the confessional. You are reaping what you sowed.