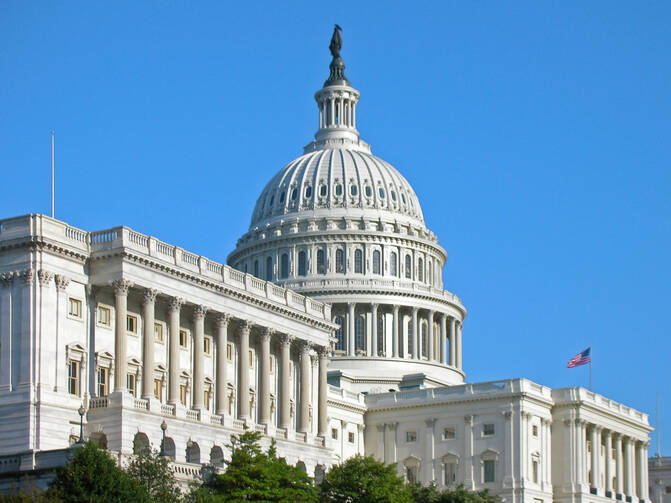 WASHINGTON (CNS) -- Five U.S. bishops, chairmen of U.S. Conference of Catholic Bishops' committees or subcommittees, said May 17 they were "gravely disappointed" with the U.S. House of Representatives passage of the Equality Act.

In an 236-173 vote, the House approved the measure, H.R. 5, which would add the new terms "sexual orientation" and "gender identity," as well as "pregnancy ... or a related medical condition," to the definition of "sex" in federal civil rights laws, the bishops noted. It also would expand the types of entities covered under those laws and it exempt itself from the Religious Freedom Restoration Act of 1993.

"Our faith calls us to uphold every individual's dignity and rights against unjust discrimination -- including in employment, housing and services -- regardless of characteristics or background," the bishops said.

H.R. 5 contains "unsound definitions of 'sex' and 'gender identity' (that) would erase women's distinct, hard-won recognition in federal laws," the bishops said. "Its sex-based nondiscrimination terms would end women's shelters and many single-sex schools. It would close faith-based foster care and adoption agencies that honor children's rights to a mother and father."

The five prelates added that the bill "would even act as an abortion mandate."

"We must pursue justice and equality for anyone denied it; but this is a regrettable approach," they said. "We are gravely disappointed with the act's passage in the U.S. House."

Earlier in May, Archbishop Kurtz and Bishops Dewane, Barber and Conley were part of a group of a dozen Christian leaders who signed on to a letter to House members voicing religious freedom concerns with the Equality Act.

In the letter, the signers said they have "grave concern over the devastating consequences to religious freedom" should the bill pass in its current form.

The Equality Act "would devastate the core ministries of a wide range of religious groups, especially those ministries that serve the most vulnerable and that help form members of our faiths to serve the common good," they said.

"These religious freedom concerns are not hypothetical or academic. The Equality Act undercuts the religious freedom of millions of Americans who live out their faith by serving others through religiously motivated charitable ministries and organizations."

-- "Houses of worship and other religious spaces will be turned into places of 'public accommodation.'"

-- "Federal funds will be denied to thousands of houses of worship, schools, and charities that currently receive them."

-- "Many privately funded shelters for the homeless and victims of domestic violence would be rendered illegal, ripping a hole in the social safety net."

-- "Core rights would be stripped from religious colleges and universities."

-- "Houses of worship, religious charities, and religious individuals will lose the protection of the Religious Freedom Restoration Act."

-- "Religious individuals would be forced to take part in weddings and funerals that violate their religious beliefs."

"The Equality Act would impose sweeping regulations to the detriment of society as a whole" and its "definitions alone would remove women and girls from protected legal existence," the three bishops said in March. "Furthermore, the act also fails to recognize the difference between the person -- who has dignity and is entitled to recognition of it -- and the actions of a person, which have ethical and social ramifications. Conflating the two will introduce a plethora of further legal complications," they said.

Sorry bishops, the "religious liberty" (to discriminate) should not be paid for by taxpayer funds. If your religion includes firing LGBTQ people, banning them from your schools, making women second class citizens, refusing needed medical care to women medically dangerous pregnancies (giving preference at all times to her fetus, never to the health of the "host"--the WOMAN), etc etc--sorry, guys, that is NOT OK. You love the term, "unjust discrimination," implying that discrimination against women and LGBTQ people is "just." I fully support the house bill. I am hoping and praying that the Democrats sweep the elections in 2020 so we can stop the insanity and cruelty that is happening in our country. The bishops have a hell of a nerve, insisting on the right to discriminate. They should be spending every waking hour prostrating themselves in shame over the sex scandals and cover up of priests RAPING CHILDREN. Bishops, take a seat. You have zero moral authority.

This would seem to violate the 1st Amendment?

It seems the bishops claim the gift of prophecy, while speaking in catastrophic tongues. Odd that these MEN sound so concerned with harms that might be done to WOMEN, and that they actually maintain that the act would “regulate thought and belief.” No wonder some fear theocracy more than democracy.

Same treatment, not special treatment, is all women and girls need or want in our country and in our churches.

Bishops need to start realizing we are done with their discriminating against women and LGBT anywhere and that if they want our church to survive much longer in the western hemisphere they had better repent of their misogyny and start ordaining women the same as men and that means women priests, bishops, cardinals and Popes.

We know now that America has one of the lowest abortion rates in the world because women get to choose instead of old grey bishops. Everywhere abortion is a crime abortions are at their highest rates globally, as well as maternal death rates. We will no longer die to keep up your lies.

Bishops you are the ones who need to change and start treating women the same as you want to be treated just as Jesus commanded you, and always exactly the same as men, both in and out of church.

Nora, exactly! More and more minorities are leaving the church bc of such discriminatory practices. These bishops need to stay out of our appointments w/ doctors and stop trying to control us all together.