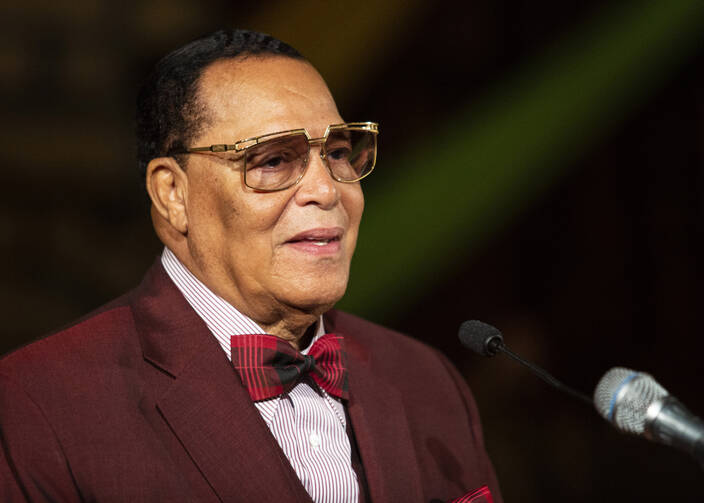 Minister Louis Farrakhan, of the Nation of Islam, speaks at Saint Sabina Church, Thursday night, May 9, 2019, in Chicago. (Ashlee Rezin/Chicago Sun-Times via AP)

During the speech Thursday at a Roman Catholic church on Chicago's South Side, Farrakhan asserted people shouldn't be angry with him if "I stand on God's word," also saying that he knows "the truth," and "separate the good Jews from the Satanic Jews."

Farrakhan was invited to speak at the church by the Rev. Michael Pfleger after Facebook banned Farrakhan, conspiracy theorist Alex Jones and conservative personality Milo Yiannopoulos, saying they violated its ban on "dangerous individuals."

Farrakhan, who turns 86 this weekend, said those who think he is a hater don't know him and have never had a conversation with him. He added those who hated him before and got to know him came to love him. He went on to say Facebook's contention that he is dangerous is true because what he says can be researched by his listeners.

"Social media you met me tonight. I plead with the rulers, let the truth be taught," he said.

The Archdiocese of Chicago distanced itself from Pfleger's decision to invite Farrakhan to St. Sabina Catholic Church, saying Pfleger did not consult with Cardinal Blase Cupich or other diocese officials before extending the invitation.

"There is no place in American life for discriminatory rhetoric of any kind," the archdiocese said in a statement. "At a time when hate crimes are on the rise, when religious believers are murdered in their places of worship, we cannot countenance any speech that dehumanizes persons on the basis of ethnicity, religious belief, economic status or country of origin."

Farrakhan noted Cupich's predecessor, Cardinal Francis George, visited him in his home and had dinner with him, and he met with Chicago Cardinal Joseph Bernardin.

"For those angry about me about coming to St. Sabina, how many would be angry with me meeting with Cardinal George and with the previous cardinal," he said. "That kind of hatred is insanity."

Pfleger, one of Chicago's most prominent activists, defended his invitation, saying he was responding to the Facebook ban as a defender of free speech.

Hours before Farrakhan was scheduled to speak, officials of the Illinois Holocaust Museum spoke out against Pfleger for "giving hatred a platform."

Museum president and Holocaust survivor Fritzie Fritzshall said when community leaders like Pfleger provide a platform for bigotry and anti-Semitism, "it increases the threat against all of humanity."

Critics point to Farrakhan's characterization of Judaism as a "gutter religion' as evidence of anti-Semitism. And perhaps, most famously, in the 1980s, he came under intense criticism for what was seen as praise for Adolf Hitler. Widely quoted for calling Hitler a "great man," Farrakhan said the reports weren't accurate, and that he'd actually called the Nazi leader "wickedly great."

His allegedly anti-Semitic, anti-white and anti-gay comments have prompted the Anti-Defamation League and the Southern Poverty Law Center to label him an extremist.

Facebook, which did not detail specific comments that led to the ban of Farrakhan and the others, says it has always banned people or groups that proclaim a violent or hateful mission or are engaged in acts of hate or violence, regardless of political ideology.

This AP report has been updated.

Well, good that the Archdiocese distanced itself from this. What was this pastor thinking?

Patricia
It's Father Pfleger......he is thinking "I can really get a lot of attention with this maneuver".
He specializes in such things on pretty much a weekly basis.