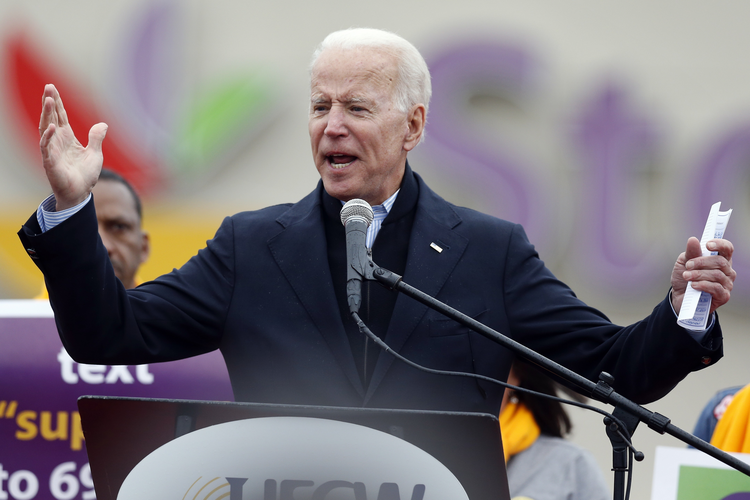 The move, confirmed by a person familiar with his plans, sets up the 76-year-old lifelong politician as a front-runner in the crowded Democratic contest as the party fights to determine who's best positioned to defeat President Donald Trump next year .

Biden, who spent the last five decades in Washington but never lost touch with his working-class background, is scheduled to face union workers in Pittsburgh on Monday as part of the rollout tour, the person said, speaking on the condition of anonymity to disclose private conversations.

While he may be popular with the white working-class in the Midwest, it's unclear if Biden will appeal to the more liberal voters who tend to have outsized sway in Democratic primary contests.

His decision largely settles the crowded and diverse Democratic presidential field at 20 candidates, including six women, five people of color and one member of the LGBTQ community. Biden would be the most experienced politician in the race, and the second-oldest, after 77-year-old Bernie Sanders.

A handful of lesser-known Democrats, including Montana Gov. Steve Bullock, could join the race in the coming weeks or months, but Biden's decision is considered the final major piece as voters, donors and elected officials alike begin to pick their favorites.

"Come on in, the water is warm Joe," California Sen. Kamala Harris, another 2020 contender, laughed on Tuesday as she campaigned in New Hampshire. "I adore Joe Biden and I think he has to make whatever decision is best for him."

Biden, who has run for president twice before with little success, will look to organized labor for support early on.

The largest firefighters union is preparing to formally endorse Biden this week, with group leaders saying they will be "investing" heavily in the former vice president's anticipated bid.

The board of the International Association of Fire Fighters will meet this week to vote on the endorsement. They plan to announce it publicly early next week.

IAFF represents 316,000 full-time firefighters across the U.S. Harold A. Schaitberger, the union's general president, said the group will help Biden raise money. It will also launch an outside group that is expected to be able to raise and spend unlimited sums supporting his candidacy.

"I always remind everyone that we are everywhere there is a blinking light or traffic light," Schaitberger said. "We have infrastructure and capability, whether it's in the neighborhoods, or whether it's working to develop caucus attendees in Iowa. Our union is very strongly resourced and we will be investing."

One of the most recognizable names in politics, Biden served for two terms as Barack Obama's vice president after nearly four decades as a senator from Delaware. His high-profile, working-class background and connection to the Obama years would help him enter the race as a front-runner, though he faces questions about his age and whether his more moderate record fits with a party that has become more liberal.

Biden spoke at an IAFF gathering in Washington last month. At the time Schaitberger said the union would be "all in" for Biden if he runs. He also acknowledged that many rank-and-file members supported President Donald Trump in 2016.

Biden, Schaitberger argued, is better positioned than other Democrats to win in the Midwest, which flocked to Trump in 2016.

As a former.long-time registered Democrat for about 30 years (I'm now 57) I very reluctantly registered as a Republican about 6 years ago though I still favor many policies of the Democratic party. (I was a registered Independent for several years before I became a Republican, since neither party fully reflected my views on major issues). Why did I reluctantly register as a Republican? Because of the support of the Democratic party for the violence of legal abortion for any reason up until the time the unborn infant (or fetus, which means "young one" in latin) is viable. Almost one million innocent unborn human beings are killed by abortion annually in our nation. Among other issues that I believe demonstrate my commitment to respect for human life (I've gone into detail with many previous posts) I also oppose the killing of people sentenced to death by capital punishment.
Former Vice-President Biden won't receive my vote if he wins the Democratic presidential nomination, because of his largely so-called "pro-choice" record as a United States Senate, ad well as his rank dishonesty regarding a Supreme Court nominee. Yes, Biden did vote in favor of the partial birth abortion ban, which is a particularly inhumane method of abortion performed after twenty weeks gestation. However, in 1983, Senator Biden even voted against the Hatch-Eagleton Constitutional amendment. The amendment was sponsored by former conservative Republican Senator Orrin Hatch (a Mormom, not that it ultimately matters, except to some extreme "pro-choice" advocates) and the late moderate Democratic Senator Thomas Eagleton (a Catholic). The Amendment would simply have overturned the radical 1973 Supreme Court Roe v. Wade and Doe v. Bolton decisions, and permitted each state, through it's elected representatives, to set abortion laws. However, Vice-President Biden showed great hypocrisy in 1986. In that year, Judge Robert Bork, was nominated as a justice to the Supreme Court. ( Judge Bork, who served on the D. C. Circuit Court of Appeals from 1982-1988, had been rated as "exceptionally well-qualified" by the American Bar Association (ABA) (Source: Wikipedia). Biden eventually voted against Judge Bork, after a stark flip-flop in his opinion of the ABA rated "exceptionally well-qualified" Judge Bork. The sources of the following facts are Commentary (March 4, 2016) and another website which I unfortunately lost the source. However, I am primarily using quotes from the cited Commentary article. According to the article in Commentary, which quoted a,column by George Will (July 2, 1987), Biden was quoted in an interview (the newspaper information was from the website whose source I lost, but I'm sure some digging can find this source) Biden said in an interview in the Philadelphia Inquirer (November 1986), "Say the (Reagan) administration sends up Bork, and after our investigations, he looks alot like Scalia, I'd have to vote for him, and if the ( special-interest) groups tear me apart, that's the medicine Id have to take. " Yet, the cowardly Biden voted against Judge Bork, who was rated so highly by the American Bar Association. Regarding the late Antonin Scalia whom Biden referred to wit h approval in the interview with the Philadelphia Inquirer, Scalia was confirmed by a unanimous 98-0 vote by the United States Senate; Vice-President Biden voted for Justice Scalia, who was opposed to the violence of legal abortion. In fairness, according to The Hill (February 13, 2016) in 1993 the indecisive (to put it charitably) Vice-President Biden stated that he regretted his,vote for Justice Scalia. I admit that I would greatly prefer another candidate than the flawed President Trump. Although she has denied any interest in running for President, I'd prefer former South Carolina governor and U.N. Representative Niki Haley as a Presidential candidate. Haley is pro-life on abortion, yet more moderate on some issues than President Trump. Former Gov. Haley was born in 1972, and so would be a relatively "young" President at 47, and is an Indian-American.
My (nearly) ideal candidate for President would be Democratic Louisiania Governor Jonathan Bel Edwards. He's strongly pro-life regarding abortion, and he and his wife personally faced a difficult pregnancy (his wife found out while pregnant that their unborn daughter had spina bifida) yet they chose life. Also, Bel Edwards is strongly opposed to human trafficking (which Pope Francis has described as modern slavery). He opposes raising the Social Security retirement age, and opposes private accounts. Bel Edwards also favors an increase in th e minimum wage. He favors universal health care with guaranteed coverage. He favors Medicaid expa nsion to address the opioid crisis, and his adninistration under his leadership expanded Medicaid which reduced the number of uninsured people by 43% and saved $200 million. Regarding the environment, Bel Edwards favors strengthening the regulation and enforcement of the Clean Air Act. He also favors the encouragement of further development and use of alternative fuels to reduce pollution. Finally, Bel Edwards, although his pro-life position on abortion labels him as a "conservative," ( I believe being for the right to life from conception, as well as caring for pregnant women is not conservative). In addition, his other positions on many other major issues make him in my view moderate-to-liberal. He also is hard to pigeonhole, since he favors gay marriage. I happen to be gay, and believe marriage is the union of one man and one woman. However, I do appreciate his compassionate stance towards gay people who choose to marry.
I

Abraham Lincoln once remarked that by and large people get the kind of government that they deserve. After looking at Trump, Biden and the rest of the field, the next election cycle looks rather depressing to say the least

Joe Biden embodies the S.O.S. of the Democratic Party accommodating itself to the Reaganite Old Deal over the past 40 years. Too Clintonesque for me.