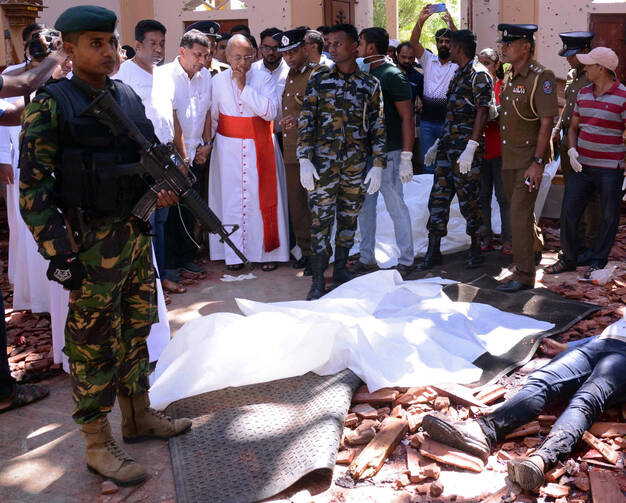 Cardinal Malcolm Ranjith of Colombo, Sri Lanka, looks at the explosion site inside a church in Negombo April 21, 2019, following a string of suicide bomb attacks on churches and luxury hotels across the island. (CNS photo/Reuters)

Cardinal Malcolm Ranjith of Colombo, Sri Lanka, has blamed the country’s authorities for security lapses that allowed the deadly Easter Sunday bombings to occur. “The government should hold an impartial inquiry and find out who is responsible for these attacks,” Cardinal Ranjith said.

Sri Lanka Police Chief Pujuth Jayasundara had issued a warning about an organization carrying out suicide bombings of prominent churches 10 days before the attacks, according to Agence-France Presse. It was unclear what action security forces had taken ahead of Easter in response.

Prime Minister Ranil Wickremesinghe claimed he and other top government officials were not told about a possible threat and told local media “we must look into why adequate precautions were not taken.” The death toll in the aftermath of the coordinated attacks reached 320 by April 23, with more than 500 wounded.

Cardinal Ranjith traveled to the fishing village of Negombo, where more than 1,000 people gathered to mourn the dead in a service he led. “The security forces have not cleared the situation yet…. There could be more attacks on public gatherings,” he told reporters. He urged Sri Lanka’s priests not to hold public events or religious celebrations until they receive an O.K. from the archdiocese.

“We do not believe these attacks were carried out by a group of people who were confined to this country,” Health Minister Rajitha Senaratne said on April 22. “There was an international network, without which these attacks could not have succeeded.” On April 23, Islamic State claimed responsibility for the attacks, but the claim could not immediately be confirmed.

In a statement released on April 23, Dexter Gray, S.J., Sri Lanka’s Jesuit provincial, denounced “these cowardly attacks,” which “have shown how vulnerable this country still is to terror strikes.”

The Jesuit provincial house is just a few kilometers from St. Sebastian’s Church in Negombo, north of Colombo, where 122 were killed. The church’s neighborhood is known as Little Rome, Father Gray said. “When I visited, it was deeply saddening to see the church with bodies on the ground, blood on the pews and a destroyed roof,” he said. “The victims include close relatives of the Jesuits. This parish had given many vocations to the society in the recent past.”

Prime Minister Ranil Wickremesinghe claimed he and other top government officials were not told about a possible threat and told local media “we must look into why adequate precautions were not taken.”

Father Gray said Sunday’s terror strikes represented “brutal attacks on all Sri Lankans and on friends of neighboring countries while visiting the island. Those responsible for the crime must be punished. All those who committed such acts of savagery must be made to pay for their crimes and their terror outfit should be eliminated, root and branch.”

Sri Lankan Defense Minister Ruwan Wijewardene told Parliament on April 22: “The preliminary investigations have revealed that what happened in Sri Lanka [on Easter] was in retaliation for the attack against Muslims in Christchurch,” in New Zealand. On March 15, an Australian gunman killed 50 people in New Zealand’s worst-ever massacre. The Sri Lankan government has so far attempted to connect the Easter Sunday attack to two homegrown Muslim militant groups.

But J.M. Joseph Jeyaseelan, C.M.F., is concerned the attacks could become unhelpfully politicized. “The country is where it is now mainly because of the dirty politics that has been prevailing in Sri Lanka in post-independence time,” he said in a statement released on April 22. “People of Sri Lanka,” Father Jeyaseelan implored, “please don’t allow your politicians to do partisan and selfish politics in this time of national tragedy and don’t be hoodwinked by their gestures and words of pseudo-empathy. And honorable sirs and madams...kindly don’t try to advance your petty political agendas during this time of grief. You all have done enough damage and we don’t want more.”

Pointing out that “over 30 foreign nationals have died in the explosions,” Father Jeyaseelan, the Claretian superior in Negombo, asked: “Who was being targeted here? Sinhalese? Tamils? Muslims? Burghers? Sri Lankans? Citizens of other countries? This is where our confusion as a nation lies.

“We really don’t know who the culprits are. We do not know their motivations. We are not sure about who their targets were,” he said. “Therefore, this is not the time to be guided by emotions pitting one ethnic or religious group against another. This is not the time for us to make guesses and start to victimize one or another group.”

“People of Sri Lanka, please don’t allow your politicians to do partisan and selfish politics in this time of national tragedy and don’t be hoodwinked by their gestures and words of pseudo-empathy.”

But at least one prominent peacemaker in Sri Lanka was not eager to jump to conclusions about the origins and motives for Sunday’s violence.

“The question to ask in this case is why did suicide bombers want to give up their lives to attack Christians in a country in which the Christians are themselves a small minority of about six percent of the population,” said Jehan Perera, the executive director of the National Peace Council of Sri Lanka, in a statement released on April 23. “Even if the Islamic militants feel that Sri Lanka has done badly by the Muslims there would be no point in attacking the Christians who are themselves a minority and subject to anti-Christian actions especially at a local level, where new Christian churches are subjected to frequent harassment.”

Mr. Perera described Christian-Muslim relations in Sri Lanka as “generally good as they join hands in common causes that affect them as minorities.” What he described as a “generally localized level of inter-religious conflict” between the two minority faiths in the predominantly Buddhist nation “is too low to translate into the type of effort to launch the ferocious assault that took place on Easter Sunday.”

The majority of those killed and injured were Sri Lankan nationals, many of whom were attending church services. Sri Lankan officials report that the dead included at least 39 foreign nationals from the United States, India, China, Japan, Australia, Turkey, Australia, and the United Kingdom and other European countries.

Damien Kingsbury, professor of international politics and a Sri Lankan expert at Deakin University in Melbourne, Australia, said there has been no history of Islamic terrorism in Sri Lanka. National Thowheeth Jama’ath surfaced on only a few occasions in recent years in relation to hate speech and property-related attacks on Buddhist temples, he said.

Experts noted that the precise coordination—six explosions went off within 20 minutes of each other—and the number of sites chosen for attack echoed the 2008 assault on major hotels in Mumbai by an Islamic State-linked terrorist group.

“It’s likely that recent return of Islamic State fighters to Sri Lanka had strengthened their resolve," Mr. Kingsbury told Catholic News Service. Earlier in April, the Sri Lankan government had identified a number of Sri Lankans who had returned to the country following the collapse of the so-called Islamic State caliphate in Syria.

Experts noted that the precise coordination—six explosions went off within 20 minutes of each other—and the number of sites chosen for attack echoed the 2008 assault on major hotels in Mumbai by an Islamic State-linked terrorist group.

The bombings have ended a decade of relative peace in Sri Lanka, a country with a long history of battling terrorism during civil war between government forces and the Liberation Tigers of Tamil Eelam.

“Apart from caring for the victims and their families, the most urgent task at this time is to preserve the social peace and interreligious coexistence that prevails in the country,” said Mr. Perera. “The speculation that Muslims may have played a leading role in the attacks has generated tensions at the community level and even anti-Muslim acts that could grow.”

He warned, “Some of the social media postings have been provocative and are clear attempts to increase the level of interreligious tensions. There could also be attempts by political actors to utilize the disaffection of the general population with the government for their own ends.”

“We need from our political leaders the states(wo)manship that the prime minister of New Zealand Jacinda Ardern displayed after the Christchurch mosque shooting that happened less than six weeks ago,” wrote Father Jeyaseelan. “We have a big lesson to learn from New Zealand about how to manage the national crisis at hand,” he said. “The religious leaders and leaders of all kinds in all levels have a big role to play modeling restraint, empathy and solidarity.

“Let us stand together as a suffering nation and let us come out of this tragedy together. Let us not take the laws of the country into our hands or become laws unto ourselves. Let us leave the law-enforcing authorities to do their job, support them in ways we can to help them do it, and let us maintain peace and restraint as responsible citizens,” Father Jeyaseelan said. “When it is time the perpetrators will be brought to book and they will have to suffer the consequences of their own actions.”

In his statement, Father Gray took note of the Easter Sunday timing of the attack. “This evil cannot overcome the hope found in our Savior’s Resurrection that invites us to see beyond pain, sorrow, and suffering,” he said. “It is a call for us ‘to get out of ourselves’ and our small, self-created worlds of vainglory and selfishness.

“The aspirations and expectation of everyone call for freedom and peace,” Father Gray added. “The Resurrection manifests a seamless fabric of existence. It lifts the veil that shrouds death and reveals to us the reality of life that spans beyond time and space. May the God of hope, who has raised his Son, fill all hearts with the desire for peace and unity.”

“I would also like to ask the government to hold a very impartial strong inquiry and find out who is responsible behind this act and also to punish them mercilessly, because only animals can behave like that,” Cardinal Malcolm Ranjith, the archbishop of Colombo, told reporters.

You leave out the Cardinal’s words in this story, words that do not reflect Christian values but rather the very human reaction of dismay and anger at the viciousness of the attacks.

They knew who was responsible for over 10 days but did nothing. Internal politics led them not to communicate with the people who could have prevented this. http://bit.ly/2L0hg9g

By the way these were not Christians but Easter Worshipers (how Barack Obama, Hillary Clinton and Elizabeth Warren described them), whatever that is.