Pope Francis at Easter appeals for peace in the world, prays for victims of “cruel violence” in Sri Lanka 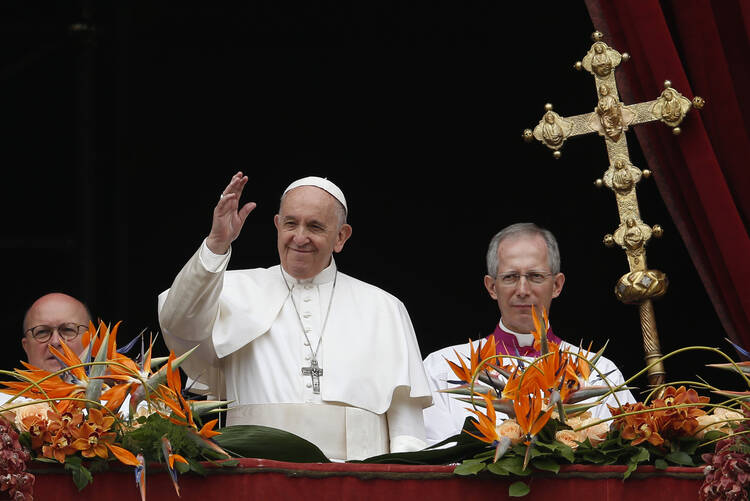 Pope Francis greets the crowd after delivering his Easter message and blessing "urbi et orbi" (to the city and the world) from the central balcony of St. Peter's Basilica at the Vatican April 21, 2019. (CNS photo/Paul Haring)

Pope Francis issued a heartfelt appeal for peace in his Easter message to the city of Rome and the world (“Urbi et Orbi”), which he delivered after receiving the tragic news of the killings of almost 200 people and the wounding of at least 400 more in explosions in three churches and three luxury hotels in Colombo, the capital of Sri Lanka, which he visited in 2015.

Speaking of the many dead and wounded in Sri Lanka, a predominantly Buddhist country of 21 million people, where Christians count for almost 8 percent of the population and where the Catholic Church has over 1.3 million members, Francis said: “I have learned with sadness the news of the grave attacks that, precisely today, the day of Easter, have brought mourning and suffering in some churches and other places of rest in Sri Lanka. I wish to manifest my affectionate closeness to the Christian community there, hit while they were gathered in prayer, and to the victims of such cruel violence. I entrust to the Lord all those who have tragically died, and I pray for the injured who are suffering because of this dramatic event.” He then paused for a moment in silent prayer.

He prayed that “before the many sufferings of our time” that Jesus “may not find us cold and indifferent” and would “make us builders of bridges, not walls.”

In his message to the world, Pope Francis called on the risen Jesus to “end the roar of arms, both in areas of conflict and in our cities, and inspire the leaders of nations to work for an end to the arms race and the troubling spread of weaponry, especially in the economically more advanced countries.”

He prayed that “before the many sufferings of our time” that Jesus “may not find us cold and indifferent” and would “make us builders of bridges, not walls.”

Speaking from the central balcony of St. Peter’s Basilica by television, radio and the social media, to a global audience estimated at around 2 billion people, Pope Francis began by proclaiming to “every person in the world” the central message of Christianity—“Jesus is risen” from the dead.

Drawing on his recent apostolic exhortation, directed to young people, Francis repeated that message saying: “Christ is alive! He is our hope” and said, “He is in you, he is with you and he never abandons you. However far you may wander, he is always there, the Risen One.”

He reminded people everywhere that because Jesus has risen from the dead, “Easter is the beginning of the new world, set free from the slavery of sin and death: the world open at last to the Kingdom of God, a kingdom of love, peace and fraternity.” At the same time, recognizing that today’s world is rocked by much violence, conflict, poverty and natural disasters, Francis reminded everyone that “Christ is alive, and he remains with us … he does not abandon all those experiencing hardship, pain and sorrow.”

Then Pope Francis went onto speak of the dramatic situations of conflict in 18 countries across the globe (including Sri Lanka), seven of them in the Middle East, another seven in Africa, two in the Americas, and one in Europe.

He told his global audience that “Easter makes us keep our eyes fixed on the Middle East, torn by continuing divisions and tensions” and he prayed that the Christians of this region—who are a tiny minority in most countries, “may patiently persevere in their witness to the risen Lord and to the victory of life over death.”

He began his focus on the Middle East by drawing attention to Syria whose “beloved people” have been “victims of an ongoing conflict” since 2011, a conflict which “we risk becoming ever more resigned and even indifferent.” He insisted that “now, instead, is the time for a renewed commitment for a political solution able to respond to people’s legitimate hopes for freedom, peace and justice, confront the humanitarian crisis and favor the secure re-entry of the homeless, along with all those who have taken refuge in neighboring countries, especially Lebanon and Syria.”

He went onto speak about the dramatic situation of “the people of Yemen”, and “especially the children, exhausted by hunger and war.” He had spoken strongly about this in early February as he set out for the United Arab Emirates and spoken to leaders there about it.

He prayed too that at this Easter time the risen Jesus may enlighten “all government leaders and peoples in the Middle East, beginning with Israelis and Palestinians, and spur them to alleviate such great suffering and to pursue a future of peace and stability.”

He told his global audience that “Easter makes us keep our eyes fixed on the Middle East, torn by continuing divisions and tensions”

He called for an end to “the conflict and bloodshed” in Libya “where defenseless people are once more dying in recent weeks and many families have been forced to abandon their homes.” He appealed to all the parties involved “to choose dialogue over force and to avoid reopening wounds left by a decade of conflicts and political instability.”

Next, turning to the African continent which he will visit again in September, Pope Francis prayed that the living Christ “may grant his peace to the entire beloved African continent, still rife with social tensions, conflicts and at times violent forms of extremism that leave in their wake insecurity, destruction and death, especially in Burkina Faso, Mali, Niger, Nigeria and Cameroon.”

He prayed too for peace in Sudan, whose authoritarian president was recently deposed, and which is “experiencing a moment of political uncertainty.” He urged that “all voices will be heard” in this new political situation, “and that everyone will work to enable the country to find the freedom, development and well-being to which it has long aspired.”

He prayed especially for South Sudan, the feet of whose political leaders he had kissed in a plea for peace, during their recent retreat in the Vatican. He called on the risen Jesus to “accompany the efforts of the civil and religious authorities of South Sudan, sustained by the fruits of the spiritual retreat held several days ago here in the Vatican” and prayed that “a new page may open in the history of that country, in which all political, social and religious components actively commit themselves to the pursuit of the common good and the reconciliation of the nation.”

Then turning to Europe, the pope prayed that the risen Christ “may bring comfort to the people of the eastern regions of Ukraine, who suffer from the continuing conflict.” He called for “initiatives of humanitarian aid and those aimed at pursuing a lasting peace.”

Pope Francis then turned to two major crisis situations in Latin America, first addressing his home continent. He drew attention to the dramatic plight of the people of Venezuela, “of all those who lack the minimal conditions for leading a dignified and secure life due to a crisis that endures and worsens.” He prayed that the risen Lord may move “all those with political responsibilities” to “work to end social injustices, abuses and acts of violence, and take the concrete steps needed to heal divisions and offer the population the help they need.”

Next he turned his attention to Nicaragua, and prayed that the risen Lord many “shed his light on the efforts made in Nicaragua to find as rapidly as possible a peaceful negotiated solution for the benefit of the entire Nicaraguan people.”

He concluded by praying that Christ “who flung open the doors of the tomb” may, this Easter time, “open our hearts to the needs of the disadvantaged, the vulnerable, the poor, the unemployed, the marginalized and all those who knock at our door in search of bread, refuge and the recognition of their dignity.”

What does it profit, my brethren, if someone says he has faith but does not have works? Can faith save him? 15 If a brother or sister is naked and destitute of daily food, 16 and one of you says to them, “Depart in peace, be warmed and filled,” but you do not give them the things which are needed for the body, what does it profit? 17 Thus also faith by itself, if it does not have works, is dead. James 2: 14

We not only prayers (there is no doubt in the power of prayer). Action needs to be taken as well.
My thoughts and prayers go out to all of our Catholic brothers and sister that have been so tragically affected by this cowardice action.

The human race in these last days is faced by two intense assaults on the Lord of all creation and the Saviour of the world.
Those with eyes to see detect both are from Satan, making people hyper-religious and totally irreligious.
Islam and the new atheism.
Two strongholds of evil, walled enclaves pretending their gates will hold out against the Kingdom of God.

We are alive now, and the great commission lies on our shoulders - go therefore and proclaim the good news ... Having been saved from damnation to life in the kingdom, we have this fortune for a purpose, to build the kingdom and diminish the reign of Satan.

Every parish and religious community has the duty to gather members to oppose both demonic strongholds.
We must teach against, pray against and preach against both.

We must make sure our young men and women and our children and grandchildren crusade against both; and that means we must warn them first that they will be put in danger of martyrdom when they do so.

I have one burning question, because my children and grandchildren must ask it of me, what is the official teaching of the custodians of the faith concerning sharia and the offer of dhimmitude to Christians and Jews instead of conversion or death.
Communist of many stripes are killers and Muslims of many stripes are killers, both by theory as well as observed behaviour.

Can any reader point me to any teaching or teacher of moral theology who addresses this burning issue?

God bless Sri Lanka - the land and its people with peace, harmony, security, and prosperity.