During Senate hearing on pain-capable abortion act, definition of ‘pain’ is contested

During Senate hearing on pain-capable abortion act, definition of ‘pain’ is contested 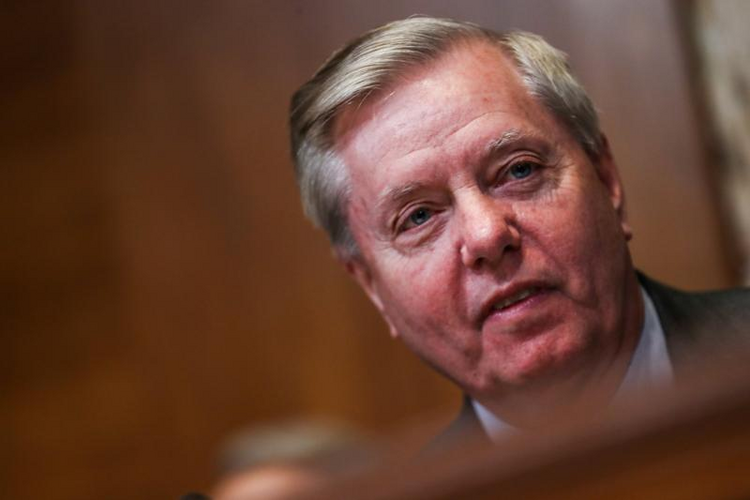 U.S. Sen. Lindsey Graham, R-S.C., is pictured on Capitol Hill in Washington April 9, 2019. Graham, who presented the legislation for the Pain-Capable Unborn Child Protection Act over a year ago, opened an April 9 hearing on Capitol Hill held by the Senate Judiciary Committee, stressing that his bill is humane and backed by scientific evidence. (CNS photo/Jeenah Moon, Reuters)

WASHINGTON (CNS) -- Statehouses across the United States have served as venues for the abortion debate to play out in the past few months, but the action April 9 was on Capitol Hill with a hearing held by the Senate Judiciary Committee on the Pain-Capable Unborn Child Protection Act.

And this time, ideological adversaries sparred over what criteria make a fetus capable of experiencing pain.

Committee Chairman Sen. Lindsey Graham, R-South Carolina, who presented the legislation over a year ago, opened the session by stressing that his bill is humane and backed by scientific evidence.

"It would provide common sense protections for unborn children at 20 weeks after fertilization," Graham said, "a point at which there is significant scientific evidence that abortion inflicts tremendous pain on the unborn child."

He continued: "(It is) standard medical practice to provide anesthesia to a child at the 20-week period because we know they feel pain. ... That says a lot, I think, about the development of the unborn child."

Graham’s bill, while banning abortions past 20 weeks and instituting high standards of care for children who do survive abortions that it permits, still contains exceptions if a procedure is necessary to save the life of the mother, or if a woman is pregnant due to rape or incest.

Ranking Member Dianne Feinstein, D-California, rebutted Graham once he had finished, presenting her own evidence that fetuses at 20 weeks gestation would not feel pain.

And her testimony bore a stamp of approval from the American College of Obstetricians and Gynecologists: "This is the premier professional organization," she said.

Feinstein quoted from a statement given by that group: "A human fetus does not have the capacity to experience pain until after viability. Rigorous scientific studies have shown that the connections necessary to transmit signals ... as well as the brain structures ... to process those signals do not develop until at least 24 weeks of gestation."

At this point, a layman would rightly be confused. Why would doctors administer anesthesia to a fetus that studies show can't detect pain during an abortion?

After expert witnesses had gotten the chance to testify, however, new facts began to come to light.

Dr. Donna Harrison, executive director of the American Association of Pro-Life Obstetricians and Gynecologists, spoke in favor of the bill and provided insight into why both sides seemed to be talking past each other's facts.

She stated: "It is scientific fact that 20-week babies are very sensitive to pain. They react the same way that you do. They withdraw from painful stimuli, they release stress hormones, their heart rate increases, and their breathing increases."

So while not contesting Feinstein's assertion that fetuses at 20 weeks still have some incomplete neurological structures, Harrison did reveal that their physical reactions to painful stimuli are almost indistinguishable from that of an already-born human being.

This might explain why fetuses at this stage are anesthetized prior to an abortion.

Graham may have been aware of this too, as his bill notes in the "legislative findings" section that "recent medical research and analysis, especially since 2007, provides strong evidence for the conclusion that a functioning cortex is not necessary to experience pain."

In other testimony against the bill, Georgia State Sen. Jen Johnson described a heinous toll she said Georgia's pain-capable abortion ban has allegedly taken on women since its passage in 2012.

In addition to mentioning declining numbers of hospitals in rural areas of the state, Johnson remarked: "Since the passage of Georgia's 20-week ban, we have seen the maternal mortality rate double, if not triple, in the state of Georgia."

While it is true that Georgia ranks near the bottom among U.S. states with regard to maternal mortality rates, several states with bans similar to Georgia's don't appear to have had the same plight: According to data gathered by USA Today, North Carolina has only 18.6 maternal deaths per 100,000 births to Georgia's 48.4, even with a 20-week ban that has been in place longer than Georgia's.

As the hearing got underway, the chairman of the U.S. bishops' pro-life committee issued a statement calling on Congress to pass the Pain-Capable Unborn Child Protection Act and stop "the barbaric practice of late-term abortion."

"This bill draws the public's attention to the shameful reality that the United States is one of only seven nations worldwide that allows the barbaric practice of late-term abortion, when a child likely feels pain and might even live outside the womb with appropriate medical assistance," said Archbishop Joseph F. Naumann of Kansas City, Kansas, who is chair of the U.S. Conference of Catholic Bishops' Committee on Pro-Life Activities.

While a fetus may have a reaction to painful stimuli, as most of us do to touching a hot surface, that does not imply that they experience pain as an abstraction, "why is this happening to me?"

I am not sure whether pain capability makes an abortion more or less reasonable or moral so I do not know why this element is being used as a basis to decide abortion legality in any bill. It does indicate that anesthesia should be mandatory at that stage just in case. However, It appears that is already standard procedure.

The fact that any state has nearly tripled in maternal deaths, like Georgia, only since passing this type of ban, is indicative that this type of ban on abortions causes more women to do extreme things like self-abort.

As for only 7 other countries allowing abortion after 20 weeks, that is utter nonsense. Far more than that amount allow abortions up until the near end of pregnancies, depending on the reason, and many include not just the mother's life, rape and incest as exclusions. Many allow for mental health or physical health of mother and unborn fetus as a reason to allow abortion beyond 20 weeks but require notes from physicians verifying these issues.

Pro-lifers really need to stop lying and exaggerating omitting evidence if any of us is expected to take any of their arguments seriously. If the truth is not enough to get your way then maybe what you are seeking is not just or best.

Our nation's current priority of mom's health matters only after babies has already been proven to have awarded us the title of the country that is the most dangerous to give birth in outside of the third world. Those are the facts by the way. This is an attitudinal issue, apparently, so even normal after birth health issues other western countries handle well, we have ignored, causing the deaths of millions of new mom's over the last several years because our attitude has been, once baby is born OK, get mom out of the hospital with as little help as we can, as fast as we can. We end up missing many health infections and also post eclampsia issues which result in death's of some moms within days or weeks after being released from the hospital.

All global evidence has led to the conclusion that bans on abortion or strict abortion laws do not lead to less abortions, at any point in pregnancy, in any country of the world. There is much evidence that stricter abortion laws do lead to more abortions happening in all countries and this is especially true for any country that does not offer free and easily accessible, good quality, artificial birth control. Countries with strict abortion laws also have higher maternal death rates in common, globally.

Facts are that in countries without easy access to birth control but also strict abortion laws, abortions are much higher (by the thousands higher, annually, per country), and maternal death rates are much higher too than in the U.S. and most every Western/Northern European Country, Canada, New Zealand, Australia, and the country of South Africa. Why do these countries I listed have the least abortion rates in the world and the lowest maternal death rates? They all have two things in common: the least restrictive abortion laws in the world and the easiest access to inexpensive or free, effective, artificial birth control.

The 10 states with the highest maternal death rates include:

Notice in the above list what states are missing: New York, Massachusetts, Vermont, Connecticut, California and Washington - some of the most liberal states in the U.S. This is not a coincidence.

Phil I would ask who feels pain as an abstraction. Most of us are not so cerebral we philosophise when we accidentally splash boiling water on ourselves. And so on. By your argument we could slap a crying baby and it wouldn't feel pain because ipt could not ask - or even think - 'why".