For storied civil rights center, Highlander Center fire is an echo of the past 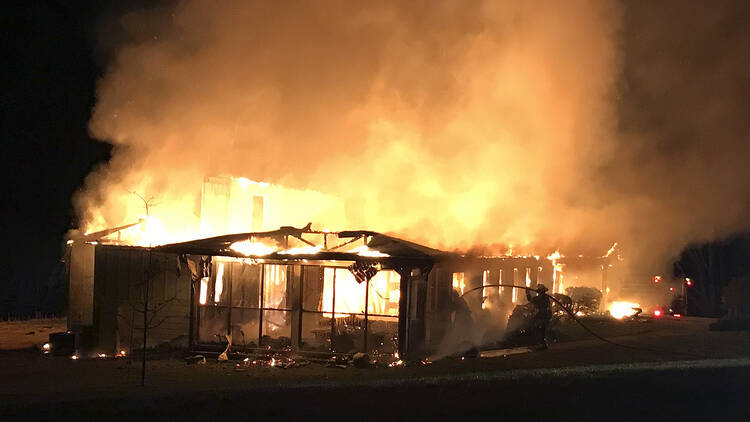 Fire destroys the main offices of the Highlander Research and Education Center in New Market, Tenn., on March 29, 2019. The center is a social justice center that trained the Rev. Martin Luther King Jr. and other civil rights leaders. Representatives of the center said Tuesday, April 2, 2019, that a white power symbol was also found spray painted on the parking lot near the building. (Sammy Solomon/New Market Fire and Rescue Team via AP)

(RNS) — The call came in at 6 a.m. last Friday. The main office of the renowned Highlander Research and Education Center was engulfed in flames.

Highlander's co-executive director, Ash-Lee Woodard Henderson, sped over to the site, a 106-acre farm, 25 miles east of Knoxville, Tenn., at the foothills of the Great Smoky Mountains.

By the time she arrived, the building had collapsed, but firefighters were still putting out the flames.

In the days following the blaze, the local sheriff said the fire may have been intentionally set, after a “symbol connected to the white power movement” was found spray-painted in the parking lot. In a sign of growing concerns about such acts, on April 4, FBI Director Christopher Wray testified before Congress that white supremacy is a “persistent, pervasive threat” to U.S. security.

Henderson took the news in stride.

Though she received no warnings that white supremacists might be targeting the center—known for training many of the leaders of the civil rights movement—she knew full well the center’s history.

“We’re an 87-year-old organization," she said. "This isn’t the first storm we’ve weathered.”

Henderson, the center’s first black female co-director, was back at work this week—in one of the center's other buildings.

Investigators have yet to allow her to sift through the remains to assess what was lost, though most of the center’s archives are safe at the Wisconsin Historical Society. Other historical documents are at the Southern Historical Collection and Southern Folklife Collection at the University of North Carolina at Chapel Hill.

But the center’s commitment to a range of issues—immigration, prison reform, the environment, worker rights, racial, gender and sex discrimination—have made it a target for hate groups before.

"This isn’t disconnected from a long legacy of the targeting of Southern movement infrastructure," Henderson said.

Indeed, the Highlander Center is inextricable from the history of the South.

"All the progressive issues of the nation that often bypass the South were held up like a beacon of light by the Highlander Center," said William Ferris, professor of history emeritus at the University of North Carolina at Chapel Hill.

The Highlander Center was opened in 1932 during the height of the Great Depression by co-founder Myles Horton, a Tennessee native strongly influenced by theologian Reinhold Niebuhr, with whom he studied at Union Theological Seminary in New York City. Niebuhr wrote the initial fundraising letter to establish the school.

Horton also may have been influenced by the Social Gospel, the early 20th-century movement that suggested the Christian message could best be realized by living the ethics of Jesus.

Horton believed the answers to society's problems lay with the experiences of ordinary people, or "folk," and that they could come together to solve them.

“The idea was you could develop grassroots movements from the bottom up by creating central leadership from the bottom,” said Chris Baker, a sociologist who teaches at Walters State Community College in nearby Morristown, Tenn., and has written about Highlander.

Later, the center began citizenship schools, training volunteers to teach illiterate farmers and sharecroppers to read so they could vote. (In those days Southern states required voters to prove they could read before they were granted the right to vote.)

In the 1950s, the center’s emphasis shifted to civil rights. Luminaries such as Ralph Abernathy, John Lewis, Rosa Parks, Stokely Carmichael and Marion Barry came to Highlander to strategize.

The Rev. Martin Luther King Jr. famously attended Highlander’s 25th anniversary in 1957. During his stay, a billboard nearby posted his photo and said he was attending a “Communist training school.”

In 1961 the state of Tennessee revoked the center's charter and confiscated its land and buildings for holding interracial meetings. It moved from Monteagle in Grundy County to Knoxville.

But the center’s commitment to helping develop democratic strategies for social change continued.

Highlander worked with coal miners to develop various legislative measures to provide benefits for those with black lung disease, Baker said. It documented absentee ownership in Appalachia. Most recently it has worked with undocumented Hispanics living in Tennessee.

“Highlander is a mosaic; it connects to the next thing,” he said.

Henderson said the center, which engages with some 6,000 people annually, will continue to do so.

Since the fire, she said the center has received “overwhelming messages of love, support, encouragement,” from all over the world.

“When you’re in right relationship with people over 87 years, it’s not shocking that people who have felt their lives transformed by being in connection with this sacred space are flanking and supporting and showing up to share their Highlander stories,” she said. "We couldn’t be more grateful and extend that love to them.”

Here is an interesting article on how to write a cover letter! everybody should know this!