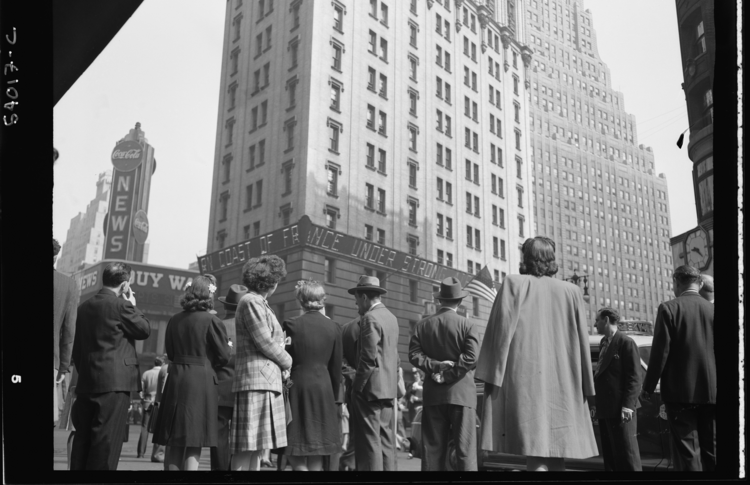 Editor's note: On June 6, 1944, Allied forces stormed the beaches of Normandy, France. The editors reflected on the significance of this day in the June 17, 1944, issue of America, which went to press just a few days later. This article has been republished as part of America’s special 110th anniversary issue.

Since Boniface Day, the fighting men of the United States and the Allied nations have been forcing their desperate way to Berlin. They were ferried from England on the feast day of the saintly Englishman who, twelve hundred years earlier, had embarked on the spiritual conquest of the German peoples. His end was martyrdom, but before he was killed he brought great numbers of the German pagans into the family of the Catholic nations, and after he had died he was acclaimed as the Apostle of Germany. May the English-born Saint Boniface, through his intercession with God, bring out of the battles of today the peace of tomorrow.

We have called it D-Day. For more than two years, we have been preparing for the great assault on the western shorelines of Europe. Here in the United States, as in England and in the other free countries, we have been driving our factories to maximum production, asking our workers to slave endlessly and enthusiastically, convoying across the ocean the war machines and equipment they had made. D-Day began on the home front months and months ago. Credit, therefore, must be given to the American workers and industrialists for their victory in preparation for the European victory.

D-Day finally dawned. For more than two years, the preparation of millions of men for this war task had been proceeding according to schedule. The head strategists had been completing their precision plans of stupendous movements. They were sharpening the minds of the higher command and were hardening the bodies of the men who would cross the Channel. All of the United Kingdom was an armed camp. The tension rose higher and dug deeper into the souls of the fighters.

H-Hour came suddenly, though it had been awaited for weeks. 11,000 planes were in the skies. 4,000 larger vessels and innumerable smaller craft sailed away from the white cliffs of England. Hundreds of thousands of men, with millions of tons of matériel, were on their way to assault the fortress of Europe. This was the most multitudinous mass movement of armed men being guided by the most synchronized orders in the history of the human race. Science and engineering had reached the peak.

Since H-Hour and D-Day, the beachheads have extended to battlefields. From the strips of sands and the ocean rocks, our American and allied fighters have breached the Atlantic Wall which the Germans had been preparing against our coming. Our men must advance beyond that Wall into the countryside of France, and then advance against other walls that have been regarded almost as invulnerable. Thus far, as we have been tersely told by the leaders of the invading forces, we have advanced according to plan.

We have the power in men and things and we have the determination in our souls to finish the ghastly job that we began on June 5 and 6.

We have the power in men and things and we have the determination in our souls to finish the ghastly job that we began on June 5 and 6. But we cannot cloak the fact that there are master minds directing the enemy operations, that there are scientists and workers fabricating the enemy war machines, that there are seasoned and desperate fighting men intent on the death of our men and the destruction of our equipment. Furthermore, we must dearly understand that the German home front is still sturdy and strong. According to the best indications, it will not crack easily. The unconditional surrender of Germany will be made in God's good time, but until then we must prepare ourselves to live through some tragic and sad days.

The Allied invasion of Germany through France is more than the clash of armies on a new battle line. To the peoples of the Allied nations, it proves conclusively that we have dared to carry the offensive against the Nazis at their strongest point. It means that the power of the Nazis is being dominated by a superior power. It means the speedier ending of war. To the peoples of Europe who have lived under Nazi terror and tyranny, it means liberation. They are turning to us, not as to foreign conquerors who have the intent and the will to enslave them again, but as friends whom they may join in victory. D-Day was Boniface Day for those who believe. May we not suggest appropriately that Saint Boniface be thought of as the Patron Saint of all of those who are fighting and suffering and dying in the battle of Europe?

This article also appeared in print, under the headline “D-Day and Boniface Day,” in the April 15, 2019, issue.