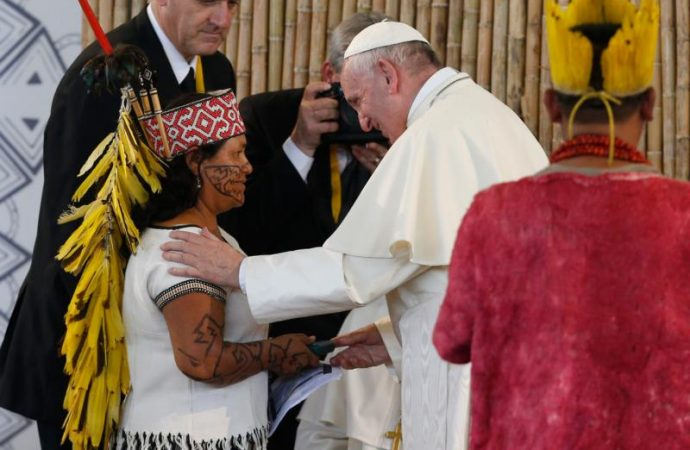 Pope Francis greets people of the Amazon in Puerto Maldonado, Peru, Jan. 19. Pope Francis has chosen the theme, "The Amazon: New paths for the Church and for integral ecology," for the Synod of Bishops for the Amazon region. The synod will be held at the Vatican in October 2019. (Credit: Paul Haring/CNS.)

VATICAN CITY (CNS) -- The issue of married priests is something for the universal Catholic Church to discuss and is not the focus of the upcoming Synod of Bishops for the Amazon, said Peruvian Cardinal Pedro Barreto Jimeno of Huancayo.

Cardinal Barreto told Catholic News Service Feb. 26 that reducing the synod to a debate on ordaining married men of "proven virtue" -- the so-called "viri probati" -- distracts from "the socio-environmental problems of the Amazonian region."

"Climate change is increasing at an exponential level compared to how humanity is trying to address it. So that is the fundamental problem," Cardinal Barreto said. "We are not going to be discussing 'viri probati' or any other issue if this great problem of climate change overcomes us."

The Peruvian cardinal was in Rome for a two-day conference sponsored by the general secretariat of the Synod of Bishop centered on the topics that will be discussed at the synod Oct. 6-27.

The Peruvian cardinal was in Rome for a two-day conference sponsored by the general secretariat of the Synod of Bishop centered on the topics that will be discussed at the synod Oct. 6-27.

Cardinal Barreto said that a lack of vocations to the priesthood is a problem that is not limited to remote areas of the Amazon; it is a problem for the church around the world as the number of parishes being closed or merged demonstrates.

Nevertheless, "it isn't the main issue," he told CNS.

"The issue is the problem of the irrational exploitation of natural resources endorsed by some governments. I would say that money is behind it in order to use natural resources for the good of a few," Cardinal Barreto said.

"We're talking about a problem that concerns us all!" he said. "We cannot be distracted by other problems that, although important, are not priorities."

When he announced the synod in 2017, Pope Francis said it would seek to identify new paths of evangelization, especially for indigenous people who are "often forgotten and left without the prospect of a peaceful future, including because of the crisis of the Amazon forest," which plays a vital role in the environmental health of the entire planet.

The Amazon rainforest includes territory belonging to nine countries in South America and has experienced significant deforestation, negatively impacting the indigenous populations in the area and leading to a loss of biodiversity.

As vice president of the Pan-Amazonian Church Network, known by its Spanish acronym as REPAM, Cardinal Barreto said the church's focus on the vast region is crucial not only to the evangelization of the Amazon, but of the world.

Cardinal Barreto is no stranger to the damaging effects of climate change. As archbishop of Huancayo, a city located in the central Andes Mountains known as Peru's breadbasket, he spoke out against the La Oroya smelter and refinery complex.

The October synod, he said, is an opportunity for indigenous populations in the region to evangelize the world about caring for God's creation.

The smelter, he said, "destroyed peoples' lives because of the emission of toxic gases" and left scores of men, women and children with dangerously high levels of lead in their blood.

"For me personally, the socio-environmental problem of La Oroya helped me to have a greater commitment" to protect the environment, Cardinal Barreto told CNS.

The Amazon he said, with its "diversity of cultures, the irrational appropriation and conflicts over land," is "a reflection of what is happening in the world."

The October synod, he said, is an opportunity for indigenous populations in the region to evangelize the world about caring for God's creation.

Too many people think the indigenous in the Amazon "are savages who have nothing to teach us," he told CNS. But "as one Amazonian indigenous person told me, the savages are the ones who wear suits and ties and have money because they not only exploit natural resources irrationally but also expel (the indigenous people) from their territories and allow those from the outside to attack their culture simply to profit."

Cardinal Barreto told CNS that he hopes the synod will unite the universal church in protecting the Amazon, seeing it not just as an environmental issue, but as an opportunity "to defend life as Jesus would."

"Let us close ranks in that dialogue that Pope Francis invites us to do in "Laudato Si'," he said, "so that we may care for our common home, to mitigate the effects of climate change that are already being felt in the world."