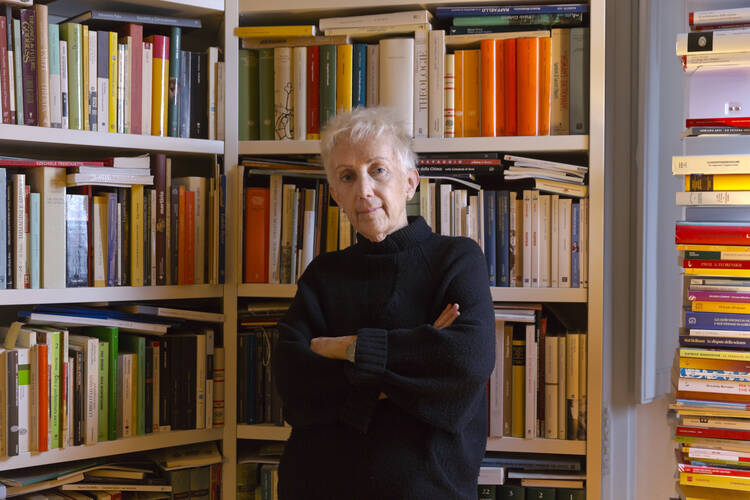 In this, Wednesday, Feb. 28, 2018 file photo, Lucetta Scaraffia, editor in chief of "Women Church World" a monthly magazine distributed alongside the Vatican newspaper L'Osservatore Romano, poses for portraits in her house in Rome. The Vatican's women's magazine is denouncing the sexual abuse of nuns by priests _ and the resulting "scandal" of religious sisters having abortions or giving birth to children who are then not recognized by their priestly fathers.

VATICAN CITY (AP) — The Vatican's women's magazine is denouncing the sexual abuse of nuns by priests — and the resulting "scandal" of religious sisters having abortions or giving birth to children who are then not recognized by their fathers.

The February issue of "Women Church World," a monthly magazine distributed alongside the Vatican newspaper L'Osservatore Romano, was published Friday. It cited Pope Francis' own analysis of abuse by saying clerical power was at the root of the problem.

It said nuns have been silenced for years by fear of retaliation against themselves or their orders if they report the priests who molested them.

The publication marks a significant public acknowledgment from inside the Vatican of the problem that the Holy See has long known about but has done next to nothing to address.

Last year, after The Associated Press and other media reported on the scandal, the international association of women's religious orders urged sisters to report abuse to police and their superiors, a significant shattering of the silence that has long kept the problem secret.

In the article, editor Lucetta Scaraffia notes that for centuries women in the church have been depicted as "dangerous and temptresses," which has complicated the acceptance within the Catholic hierarchy that they can be victims of unwanted sexual advances by priests.

"But here Pope Francis' analysis about abuse can be of some help: If you point to power, to clericalism, the abuse against religious sisters takes on another aspect and can finally be recognized for what it is: that is an act of power in which touch becomes a violation of one's personal intimacy," she wrote.

Last year, after The Associated Press and other media reported on the scandal, the international association of women's religious orders urged sisters to report abuse to police and their superiors, a significant shattering of the silence that has long kept the problem secret.

The article noted that reports written by religious sisters were presented to Vatican officials in the 1990s about the problem of priests sexually abusing nuns in Africa — they were considered "safe" partners at the height of the HIV crisis.

While little or nothing changed, sisters from the developing world and also wealthier countries are beginning to denounce their abuse as part of an overall demand for greater power for women in the church — part of the #MeToo reckoning.

"If the church continues to close its eyes to the scandal — made even worse by the fact that abuse of women brings about procreation and is therefore at the origin of forced abortions and children who aren't recognized by priests — the condition of oppression of women in the church will never change," Scaraffia wrote.

"Women Church World," which is published in Italian, French and Spanish, last year made headlines with an issue devoted to "work" and an article denouncing how nuns are often treated like indentured servants by cardinals and bishops, for whom they cook and clean for next to no pay. The current edition was dedicated to the sense of "touch" and how it can be perverted.

In an opening editorial, one of Italy's leading Jewish intellectuals, Anna Foa, said the abuse scandal had transformed that most fundamental aspect of love — the caress — "into an expression in and of itself suspect and practically obscene."

Foa also cites Francis' own words in "thanking journalists who were honest and objective in discovering predator priests and made the voices of victims heard."

Are gay priests are responsible for these outrages as well? Interesting that these vile events garner far less attention than male-male sexual abuse - though their affects and the moral calamity is the same or worse.