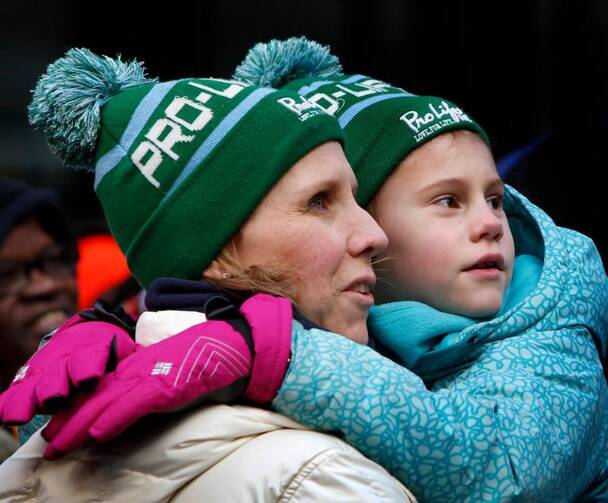 A mother holds her daughter during a rally at the start of the annual March for Life Chicago Jan. 13. Thousands of people from the Chicago Archdiocese and from across the country braved frigid temperatures during the event. (CNS photo/Karen Callaway, Chicago Catholic)

WASHINGTON (CNS) -- Just in time for the annual March for Life, an annual poll of Americans' views on abortion shows that 75 percent want "substantial" restrictions on abortion access even as more than half of respondents describe themselves as "pro-choice."

Conducted by the Marist Poll at Marist College, the survey of 1,066 adults Jan. 8-10 revealed that respondents would welcome limits on abortion so that it can be performed only during the first three months of pregnancy.

Among Republicans, 92 percent support abortion limits, while 60 percent of Democrats and 78 percent of independents shared the same view.

"What you're getting here is the sense that the debate over abortion when you look at what people want in terms of restrictions ... is in favor of substantial restriction on abortion," said Andrew Walter, vice president for communications and strategic planning for the Knights of Columbus, during a Jan. 15 teleconference with reporters.

The Knights have sponsored the poll since 2008.

Barbara Carvalho, Marist Poll director, said the results show that there is not "a really polarized electorate" when it comes to abortion.

"We actually see where there is a good deal of common ground on the whole host of policy decisions (related to abortion)," she said during the teleconference.

She said the survey results reveal that those who identify as "pro-choice" are not necessarily strongly in favor of unrestricted access to abortion as is widely portrayed in media and among some advocates in the strongly pro-life and "pro-choice" camps.

What you're getting here is the sense that the debate over abortion when you look at what people want in terms of restrictions ... is in favor of substantial restriction on abortion, said Andrew Walter, vice president for communications and strategic planning for the Knights of Columbus.

The poll also asked respondents about their views on what the U.S. Supreme Court should do if it decides to revisit the 1973 Roe v. Wade decision that legalized abortion, with 49 percent saying the decision should revert to the states. Thirty percent said abortion should be legal without restriction while 16 percent said it always should be illegal.

Other findings in the poll show:

Carvalho said the margin of error in the data was plus or minus 3.7 percentage points.

Thousands of people are expected for the 46th annual March for Life Jan. 18 in Washington.

We really can pretty much start and stop this comment with "The Knights have sponsored the poll since 2008." So we are absolutely certain the poll is completely agenda laced, like what if we only ask priests what they want? or only 95 year old republicans or ask democrats if they want restrictions on aborting in the 8 1/2 month of pregnancy for no reason at all and describe that at as wanting serious restrictions.

The Knights are a highly, conservative, and highly sexist, and corrupt group of middle class white catholic men who desperately want to feel important when they are not important. So they dream up reasons and excuses to attempt to control women which makes bishops smile at them and want to pat them on their little heads.

None of this polls numbers match secular or Catholic polling numbers outside of the Knights of Columbus.

Also and again - for those actually interested in saving the unborn and women - criminalizing abortion or making it a crime at any stage has never shown evidence of lowering abortion in any country of the world but any laws restricting abortions or making them difficult seems by all global evidence to make the abortion rates rise in those countries along with raising dramatically maternal death rates too.

From Guttmacher: Abortion and Birth Control Stats.
(Notes from my other research on this topic - bottom)
REGIONAL INCIDENCE AND TRENDS:
• The highest annual rate of abortion in 2010–2014 was in the Caribbean, estimated at 59 per 1,000 women of childbearing age, followed by South America, at 48.
The lowest rates were in Northern America, at 17, and Western and Northern Europe—at 16 and 18, respectively.
• Across regions, Eastern Europe experienced the largest decline in the abortion rate, from 88 in 1990–1994 to 42 in 2010–2014. Despite this decline, there is a persistent gap in rates between Eastern and Western Europe (42 vs. 16) likely reflecting lower use of effective, modern contraceptive methods in Eastern Europe.
• The overall abortion rate in Africa was 34 per 1,000 women in 2010–2014. Subregional rates ranged from 31 in Western Africa to 38 in Northern Africa. There has been little if any change in abortion rates in these subregions since 1990–1994.
• For Latin America, subregional abortion rates range from 33 in Central America to 48 in South America. Rates have increased slightly since 1990–1994, but not by statistically significant amounts.
• Abortion rates in Asia have also fallen since 1990–1994, although not significantly. Asia’s subregions all have rates close to the regional average of 36 per 1,000 women.
• Highly restrictive abortion laws are not associated with lower abortion rates. When countries are grouped according to the grounds under which the procedure is legal, the rate is 37 abortions per 1,000 women of childbearing age where it is prohibited altogether or allowed only to save a woman’s life, compared with 34 per 1,000 where it is available on request, a nonsignificant difference.
• High levels of unmet need for contraception help explain the prevalence of abortion in countries with restrictive abortion laws.

What I have researched from other appropriate sources agrees with Guttmacher but also indicates the below information on this subject:
The World Health Organization Research agrees with the Guttmacher Research. Their results are almost identical.
However, neither the W.H.O. or Guttmacher can give us a solid conclusion, due to lack of evidence, as to what happens when countries offer easy access to quality birth control but make their abortion laws stricter. This is due to the fact that most countries either are lenient on both issues or they are strict on access to both abortion and birth control.
We could make some confident speculation, based on the global evidence that does exist, that in countries, currently, where laws are strict for both abortion and birth control or where both are criminalized, that were these countries to loosen up laws on birth control access alone and not on abortion, the abortion rates would come down more, and likely closer to where the Western and developed nations are at. However, these countries are not necessarily or likely to get quite as low as the western, industrialized, countries since there does exist evidence that the mere difficulty of access to abortion alone lends, especially in certain cases, to higher abortion rates by itself.
Unfortunately, in the countries where the laws for abortion become much stricter than in the past, such as may exist in the U.S. for the future, the amount of abortions could increase quite a bit even if birth control access remains easy and free. One of the reasons this is true is due to the fact that, in these countries, many women who get pregnant in their later years, 40s or older, often now seek to get an amnio to see if their fetus is healthy. They can only get this during the late part of the 3rd month or beginning of the fourth month of their pregnancy. With stricter laws, some of these women may decide they don't want to take the chance the fetus is unhealthy or has downs syndrome, and instead may opt to get an early abortion thru more easily, anonymously obtained, although perhaps illegally obtained, abortion pills. These pills become not an option in later months, and testing would put women in a position to not be able to deny they are pregnant, publicly, if they wait, so this puts the women at risk they could be charged with a crime if abortion becomes illegal. (Please note: I am not suggesting this is right or moral or Christian behavior but only that the reality exist and I personally know quite a few women who would fit this category, today, in the U.S. despite anyone's opinions or beliefs)
A horrible side effect of the above situation is this: 50% of all downs fetuses naturally miscarry in the first trimester, and 40% that make it to the 2nd trimester miscarry then. Fetuses that have other severe health issues often miscarry, naturally, within the first three - four months of pregnancy as well. The amount of downs fetuses that become born infants are very small amounts even for older women. This illness is still quite rare overall. This means many women could end up aborting perfectly healthy fetuses, by the thousands, each year, or more, to avoid the possibility of having an unhealthy baby, and this number increases if women already have other children. One way some western countries avoid this issue is that they keep early abortions legal and allow later abortions into the 4th and 5th month if the fetus has tested unhealthy or the woman's life is in real danger if she remains pregnant. Many married older women think they aren't fertile when they still are and stop taking birth control.
Lastly, there is no existing evidence that easy access to abortions, even throughout pregnancy, equates to more abortions, in any country, that has free and easy access to birth control. In fact, countries with easy access to abortion and also free easy access to birth control have the lowest rates in the world, and these rates lower even more when those countries offer mandated longer paid maternity/paternity leaves, free quality universal health care, and free, quality, public daycare. (The only exception to this seems to be Sweden. Despite Sweden's similarly ease of access to both abortion and birth control and it's offering many of the benefits listed above that other Western European Countries offer, it still has quite a high abortion rate. However, there is no evidence suggesting that tightening Sweden's existing laws would lower its rate for abortion and doing so would likely only raise it even higher.)
The evidence we do have seems to indicate, on a global scale, that despite what seems reasonable in theory, i.e., harsh abortion laws will lower abortion rates, is completely false when put to the test in reality. It just may be that easy access to abortion, and lenient abortion laws, help more to reduce abortion rates than having strict laws against abortion, in any country. Perhaps some morality issues simply cannot be solved by force or threat but must instead be dealt with by respecting the situation of the people involved and helping them out of their place of fear or desperation, with physical and material protections and emotional and spiritual support. We could do much more perhaps by encouraging a choice for good, and for life, without attempting to control women. We could choose to help women in real ways, instead of trying to corner them into doing the Christian thing.

All you have to do is put in "abortion polls" in Google and one will see how biased and unconvincing this K of C poll is. Many well done and reliable polls dispute this K of C poll. Very sad and very, very unchristian in being misleading and using statistics to deceive not only the public but deliberately using the ends to justify the means.

The reaction to taking an abortion pill can be similar to contractions and cervix dilation from labor, but instead of a 6-10 lb child it is an embryo (mass of cells, pre 12 weeks). There is definitive pain, cramping, and hormonal issues with both pills.