Polarization can bring about real political change. Our past proves it. 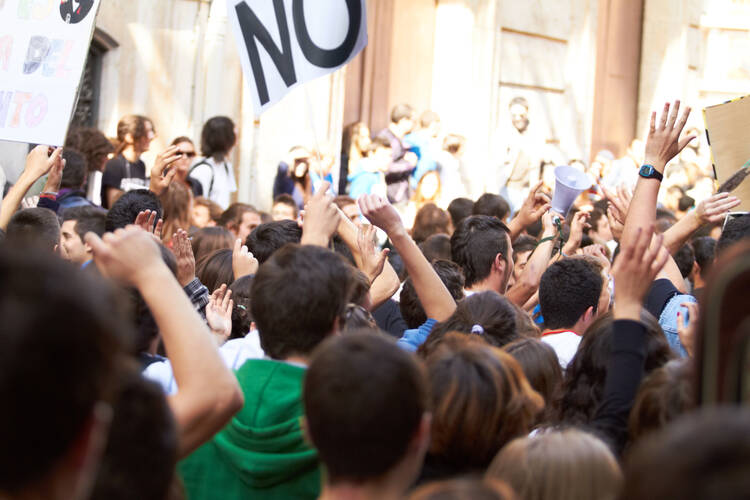 A few weeks after the inauguration of President Trump, I picked up George Lakey at the airport. I sighed when I saw him. For me, those were days of dismay—some students had been in tears during class, while others celebrated in MAGA hats, and every news cycle seemed to further entrench the paralyzing tale of a disconnect between the dueling headspaces of U.S. politics. But George, fresh off his flight, counteracted me with a smile. “Exciting times, aren’t these?” he said.

I had been the editor for George’s column at Waging Nonviolence some years back, and I had come to regard him as one of my best teachers on how to think about social change. He got his start learning from Bayard Rustin, a leading strategist of the civil rights movement, and ran humanitarian supplies through the naval blockades of both North and South Vietnam during the war there. He organized for gay human rights, for a nuclear-free world and for safe streets in his neighborhood of West Philadelphia. Not long ago, he and his friends ran a years-long campaign that forced the biggest financier of mountaintop removal mining to divest from the practice. He is in his 80s now, but he is still winning.

The job of the middle class, as George Lakey puts it, is to keep the peace by managing the relationship between the working and owning classes.

George’s new book, How We Win, is a manual for practical activism, full of stories from his decades of practice, together with conversations with younger activists. It refutes the politics of reaction—whether the right- or left-wing kind—with a politics of possibility and with vigorous, nonviolent conflict.

For me and for many people at the public university where I teach, “polarization” is a bad word. We talk a lot about how to reduce it, as if that is our job. Our students have internalized this mission, too. They lament political division in class discussions and try to solve for it in their term papers. Leading Catholic commentators, including America editors and contributors, worry about polarization just as habitually. Where does this anxiety come from?

Mr. Lakey (to be a bit more formal here) explains what we are up to: Fixing polarization is, indeed, our job. Specifically, it is a middle-class job. Coming from a working-class background, Mr. Lakey has seen with particular acuity the unspoken middle-class training at work among fellow activists. The job of the middle class, as he puts it, is to keep the peace by managing the relationship between the working and owning classes. Whatever the department or major, the managerial arts constitute an implicit curriculum in most universities. We assume, after all, that times of tranquil unity will be when our rational expertise will be best heard. The Catholic Church, too, has in many quarters abandoned its guardianship of the organized working class in exchange for training the next order-keepers.

When a society heats up, it becomes more pliable, and that can mean bending in scary directions. Where these pliable times take us depends on the movements we can build.

The history that Mr. Lakey has lived through taught him the limitations of good order. Over and over, he saw necessary change happen during tumult; tranquility, on the other hand, often kept unjust conditions stuck in place. The 1950s, which many Trump voters regard as when America was especially great, was the last gasp of legal segregation, and rational expertise served the purposes of a deranged nuclear arms race. As for those who long for the comparatively low-drama Obama years, they excuse that president’s deftness in presiding over an ever-expanding list of unauthorized pseudo-wars, widening wealth inequality and deportation levels that even President Trump has yet to reach.

Times of polarization bear unique opportunities for significant change. The 1930s saw militant leftist labor organizing and Nazis rallying at Madison Square Garden, but out of that mess we got the eight-hour workday, Social Security and rural electricity. The 1960s pitted generations against each other over a brutal foreign war and unrest at home, but all that troublemaking finally did away with explicit racism in our laws (despite middle-class pleas for more orderly patience) and led to a dramatic expansion in many women’s options for how to live their lives. These were concessions that the ruling order would never have given without being forced.

Polarized times tempt danger. When a society heats up, it becomes more pliable, and that can mean bending in scary directions. The old guardrails are gone. There is a very real authoritarian surge happening around the world right now. That is why Mr. Lakey stresses the importance of building campaigns and movements that can win real victories—the same kinds of organizing that made the struggle against Jim Crow successful. Today’s rituals of self-expression in marches and rallies are not enough, if they ever were.

We seem to be on the precipice of real change, for better or worse. The military establishment cries recklessness, but with troop withdrawals from Syria and Afghanistan, the endless war on terror may finally be ending. Ineffectual, incrementalist centrism is giving way to calls for the kind of universal medical system that is long overdue. After decades of bitter stalemate, Roe v. Wademay soon no longer be the law of the land. President Trump and probable Democratic presidential candidate Elizabeth Warren alike are threatening to put teeth back in antitrust enforcement. Criminal justice reform is beginning to happen at last, even over the objections of the Senate majority leader. American empire and American capitalism are in flux like they haven’t been for decades. Where these pliable times take us depends on the movements we can build. Old limits on our imaginations have turned imaginary.

Embracing polarization does not come easily to those with middle-class training. It can demand an act of faith. Surely part of what helps Mr. Lakey see possibilities when others quiver with anxiety is his committed Quakerism—together with being part of campaigns determined to win. Faith finds quiet in struggle and loves enemies while knowing them as such. These are times to give up the urge to manage.

Or is a way to civil war?

I was listening to an historian several months ago who said at the end of the civil war a confederate soldiers from the hills of western Tennessee and a union soldier from the hills of western Pennsylvania had almost identical aspirations and beliefs except for one thing, slavery. So when slavery disappeared as an issue they were almost identical. Now two young people can live next door on the same block and have very little in common. When one side wants to eliminate the United States and the other wants it stronger, how do you reconcile?

Quote - To understand events around the world today, one must think in terms of the class struggle. This sentence sounds like something that could be written by a doctrinaire Marxist. But it is nonetheless true. Much of the current tension in America and in many other democracies is in fact a product of a class struggle. It’s not the kind of class struggle that Karl Marx wrote about, with workers and peasants facing off against rapacious capitalists, but it is a case of today’s ruling class facing disaffection from its working class. http://bit.ly/2CpKbfr (ruling class - academia, news and popular media, think tanks, NGO's, religious leaders, government workers)

“The man who has no enemies has no character”. - William 0’Malley S.J. (which I first read in America magazine decades ago). The Republican Party has become utterly corrupt. Trumpism is its culmination in lies and white nationalist populism. The fight is on.

For Future Folk
Albert Camus, now we have plague too
Fascism with an American twist
I rebel; therefore, we exist.

Do you yearn for the good old days under Obama where there was no corruption? I saw a YouTube video on corruption way back then and was told it was all because of the video. I also filed for non-profit status and am still awaiting the reply in the mail. But my friends selling baby parts got their reply right away.
Do you understand the philosophy that founded nazism is the same that founded planned parenthood? I do not mean to use any trigger words that might wake you from your complacent dream experience.