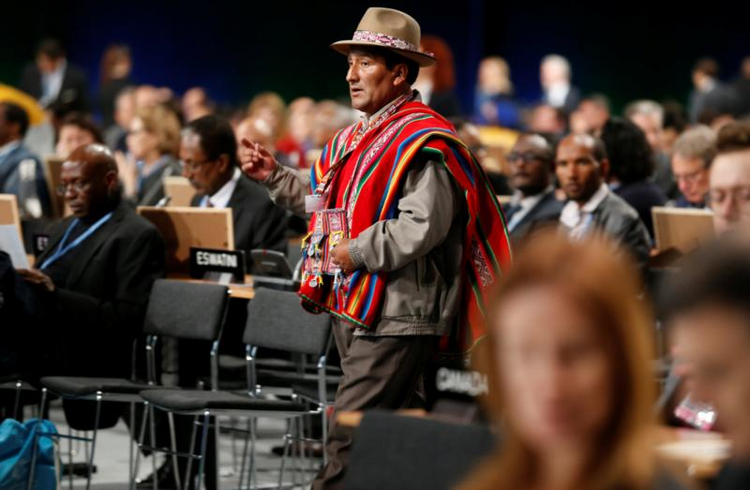 The Holy See's chief delegate at the United Nations climate talks in Katowice, Poland, urged the development of stronger links among nongovernmental organizations in the drive for a final agreement as the two-week conference near its end.

The call Dec. 12 from Msgr. Bruno-Marie Duffe, secretary of the Vatican's Dicastery for the Promotion of Integral Human Development, came amidst signs of resistance to any substantive agreement emerging from the conference from the United States and other developed countries.

"It's difficult to develop an international approach when some governments don't want to continue participating in dialogue. But it's important to continue talking with all the social actors," Msgr. Duffe said during a media briefing at the Conference of Parties to the U.N. Framework Convention on Climate Change, or COP24.

"The church must go on promoting solidarity among nations and peoples and remember past acts of cooperation not just at the level of states and political decision-makers."

"The church must go on promoting solidarity among nations and peoples and remember past acts of cooperation not just at the level of states and political decision-makers," he said.

Msgr. Duffe said he had met with U.S. representatives Dec. 11, three days after they joined Russian, Saudi Arabian and Kuwaiti delegates in opposing an official "welcome" by COP24 delegates of an October report by the Intergovernmental Panel on Climate Change with new warnings of disastrous effects if greenhouse gas emissions are not curtailed.

In the end, no action was taken on the report.

"We are here as a church to offer hope for everybody about the possibility of caring for the earth, nature and resources in what the pope has called our common home," Msgr. Duffe said.

"The U.S. itself is a community of people, and civil society is really the first actor in our ecological revolution," he added. "We have to think together with the political authorities, but also support social initiatives."

COP24 concludes Dec. 14 with plans to adopt a "rule book" for implementing commitments under the 2015 Paris climate accord, which included keeping global warming to a maximum of 2.7 degrees Fahrenheit.

However, several of the 193 country delegations have accused the U.S and other high greenhouse gas-emitting countries of slowing progress towards a final outcome and seeking to frustrate the Friday deadline.

Speaking at the media conference, Mercy Chirambo, a Caritas Malawi leader, said climate change already is affecting the seasons in the southern Africa nation, diminishing the capacity of families to provide for their children.

The issue is "not just physical and economic, but also emotional and psychological," Chirambo said.

Meanwhile, Joseph Sapati Moeono-Kolio of the Pacific Climate Warriors, an environmental advocacy group, said vulnerable indigenous communities were praying they would "make it" through the approaching typhoon season.

"We can't just get stuck on lines and paragraphs in these negotiations -- the difference between 1.5 and 2.0 degrees Celsius is whether we stay on our islands or leave forever," said Moeono-Kolio, a Samoan Catholic.

"We have to ramp up our ambitions and welcome and ratify the IPCC's findings. It's ludicrous that we ask for its report and then don't welcome it when it arrives -- a self-defeating logic which harms the world's most vulnerable," he said.

Msgr. Duffe said the pope had stressed the need to "meet and listen" to all sides, including governments and grassroots campaigners, and "understand the different positions."

The Catholic Church would remain "engaged and committed" to the "fight" against climate change.

The Catholic Church would remain "engaged and committed" to the "fight" against climate change, he added, and would encourage the scientific community to continue efforts reflected in the IPCC report.

The Vatican's Pontifical Academy of Sciences circulated a "call to action," published after a Dec. 10 symposium with leading scientists and church figures, urging the scientific, cultural and spiritual communities to be guided by their "collective insight" on climate change.

Called the Katowice Memorandum, it said the "window of opportunity" was rapidly closing to take responsibility and avoid an "all-out climate crisis."

Msgr. Duffe said the Universal Declaration on Human Rights, the 70th anniversary of which was marked Dec. 10, emphasized the need for common responsibility through "development of education, health, culture and human participation," adding that governments now had to "pass from ethical intentions to financial and political decisions."

"We are accustomed to talking about climate change decisions tomorrow, but tomorrow is already today, and today we must make decisions for intergenerational solidarity," he said.

"We are in a vulnerable situation together, where we have to encourage ethical choices for protecting human dignity, especially of the world's poorest. We also have to support a new universal solidarity agreement at this conference."