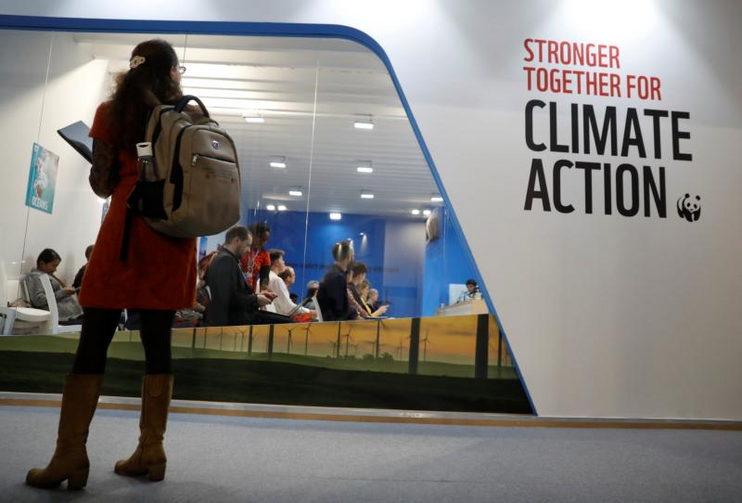 Catholic representatives worked to keep negotiations on track for a comprehensive deal to address global warming as the U.N. climate change conference entered its second and final week in Katowice, Poland.

The effort was complicated by the actions of U.S., Russian, Saudi Arabian and Kuwaiti delegates, who objected to a note by the Conference of the Parties to the United Nations Framework Convention on Climate Change, or COP24, "welcoming" an October report by the Intergovernmental Panel on Climate Change.

The report warned that greenhouse gas emissions from the burning of fossil fuels would need to be reduced by 45 percent by 2030 for global warming kept to a maximum of 2.7 degrees Fahrenheit under the 2015 Paris climate accord or risk worsening drought, floods, extreme heat and poverty.

After hours of negotiations Dec. 8 and with no consensus reached, the note was dropped under U.N. protocol.

Still, the church continued to press for sustained action on climate change.

"The church is exerting pressure and showing really significant commitment. We must hope countries match this," said Rebecca Elliott, communications director of Global Catholic Climate Movement, a coalition of more than 650 Catholic organizations.

"Besides acting as a moral voice and providing a robust faith-based response, Catholic organizations are relating stories about the experiences of people from Latin America, Africa, India and the Pacific islands who are gravely affected by climate change."

The day also was observed as the 70th anniversary of the adoption of the Universal Declaration on Human Rights by the U.N. General Assembly.

The appearance of Patricia Espinoza, executive secretary of the U.N. Framework Convention on Climate Change, at the church-sponsored event served to recognize "the importance of the Catholic voice" at the Katowice meeting, Elliott said.

A senior policy adviser with U.S.-based Catholic Relief Services also recognized the work of Catholic campaigners at the conference to coordinate efforts.

"With so many technical and procedural matters to contend with, it's been essential to bring everyone together and avoid duplication as we push for a deal," said Lori Pearson, who advises the U.S. bishops' overseas aid and development agency on food security and climate change issues.

"While interesting, wonderful ideas are being generated at national and global level, they won't be implemented without local action," she said. "This is where Catholic organizations likes ours are playing a key role: in translating initiatives into real benefits for people on the ground."

Meanwhile, Dan Misleh, director of the Catholic Climate Covenant, said Dec. 10 in a statement that nearly 800 Catholic institutions in the U.S. had committed "to finding ways to reduce their carbon footprint, raise awareness and advocate to their legislators that we must all do our part to avoid a climate catastrophe."

The bishop added that the U.S. Conference of Catholic Bishops, a party to the covenant, has said it believes the President Donald Trump's plan to withdraw the U.S. from the Paris climate agreement was "inconsistent with the responsibilities of a nation as wealthy and compassionate as ours."

In addition to the Human Rights Day event, Catholic organizations met the same day to "explore personal stories from the front lines of the climate crisis" and ensure government actions upheld human rights, a statement released after the meeting said.

Meanwhile, a "climate pilgrimage" group that included typhoon survivors from the Philippines reached Katowice Dec. 8 after walking 950 miles from the Vatican. Participants handed prayer ribbons Dec. 10 to the U.N.'s Espinosa.

About a year and a half ago, I was in Gdansk and there was coal piled up as far as I could see.

Do these Catholic groups have a plan for all the poor that will be created when the world switches energy sources.? Maybe in the future will alternative sources of energy economically arise but not now unless there is a massive switch to nuclear.

Most republicans support renewable energy. It is more secure as it is distributed, not a point target for terrorists. It is more robust in the face of climate change induced disasters. It is libertarian and individualistic as the individual owns his own power source. Coal is a filthy, asthma-inducing, polluting energy source that makes the poor sick to boot. The switch to renewable energy will generate jobs doing something useful and productive instead of manufacturing a lot of crap people don't need.

Two things, I am not supporting coal. Just pointing out that many countries use it in large amounts including the virtue signaling Germans. I mentioned Gdansk since the conference is in Poland. There are also different grades of coal.

The only significant source of power that could replace carbon based fuels is nuclear. There is potentially a nuclear technology that would burn the fuel into dust that would be harmless. Not yet built but someone should do it. The free market will eventually sort this out.

Strong on rhetoric, but short on ideas.

Ohh Happy to know this I hope this will help in growing the teer lottery game in Poland like India. Check more details here