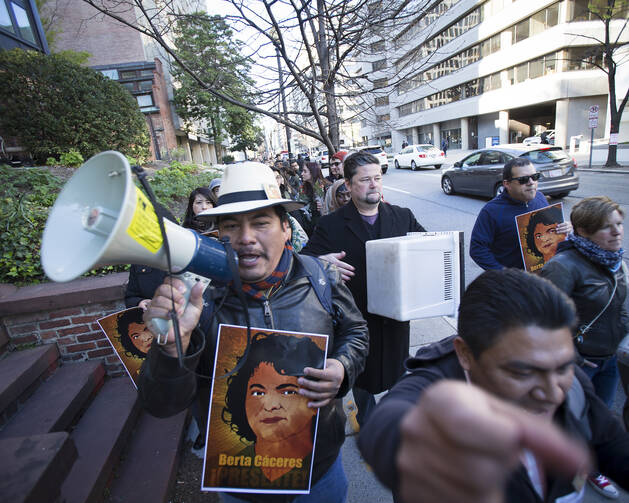 Activists march to the Inter-American Commission on Human Rights in Washington, D.C., in April 2016, calling for an independent investigation of the murder of environmental and indigenous rights activist Berta Cáceres. (CNS photo/Tyler Orsburn)

The first trial related to the murder of the environmental activist Berta Cáceres in Honduras in 2016 is set to open on Sept. 10, but prosecutors admitted on Aug. 14 that they had not analyzed key evidence they seized during multiple arrests two months after the crime. The court has ordered prosecutors to provide an analysis of this evidence to lawyers representing Ms. Cáceres’s family by Aug. 29, giving them only two days to review it before an evidentiary hearing on Aug. 31.

The international environmental group Global Witness has called Honduras “the most dangerous country to be an environmental defender.” Because of the attention focused on the murder of Ms. Cáceres, a world-renowned leader of the indigenous Lenca people, there is concern that if impunity persists in this case, there will be further violence against human rights leaders in Honduras.

Two members of the organization co-founded by Ms. Cáceres, the Civic Council of Popular Indigenous Organisations (Copinh), were killed and others reported assassination attempts in the weeks and months following Ms. Caceres’ murder. Bertha Zúniga, the daughter of Ms. Cáceres and now Copinh’s general coordinator, was the target of a machete attack in July 2017. Other Copinh members have reported harassment by Honduran authorities.

There is concern that if impunity persists in this case, there will be further violence against human rights leaders in Honduras.

Before her murder, Ms. Cáceres said she had received numerous threats because of her efforts to stop a hydroelectric dam project, Agua Zarca, from being built on the Gualcarque River, which is considered sacred to the Lencas. A Lenca man, Tomas Garcia, was shot dead by Honduran military during a protest against the project in 2013. Global Witness reports that another opponent of the project William Jacobo Rodriguez, was killed a year later.

The Inter American Commission on Human Rights had called on the Honduran State to protect Ms. Caceres, but she was shot and killed in her home on March 2. Four men were charged with carrying out the murder; two had direct ties to the DESA Corp., the company building the dam, and three had ties to the Honduran military.

“We’ve been in an intense fight for justice for more than two years,” said Ms. Zúniga at a press conference in Guatemala City on Aug. 21 where she called on the international community to keep an eye on the legal proceedings. “It’s a crime of the state that has transcended the Honduran borders,” she said. “There is little will to find integral justice. The criminal structure which ordered her murder must be uncovered.”

Ms. Zúniga reiterated a demand for the “intellectual authors” of the crime to be investigated, naming the powerful Atala Zablah family in Honduras, who stepped in as a major financier in 2011 with multimillion-dollar funding for the DESA Corp.Though the upcoming trial will explore the circumstances leading up to Ms. Cáceres’s murder, it will be difficult to show the link between who ordered the killing and who carried it out without evidence such as the cellphones and computers that prosecutors have in their possession.

Before her murder, Ms. Cáceres said she had received numerous threats because of her efforts to stop a hydroelectric dam project, Agua Zarca, from being built on the Gualcarque River.

On May 2, 2016, four men were captured and charged with Ms. Cáceres’s murder by Honduran police. (Between May 2016 and February 2017, the four additional men awaiting trial in Sept. were arrested for the crime.) Two of the men had worked with DESA, and the others had important roles in the Honduran military. Retired Army Lieutenant Douglas Geovanny Bustillo had been the head of security for the company until July 2015, when he went to work for the company that provides security for Walmart stores in Honduras. Ms. Cáceres accused him of sending her a text message threatening sexual assault in December 2013.

At DESA, Mr. Bustillo worked closely with Sergio Rodriguez Orellana, an environmental engineer, on outreach in communities near the proposed dam site. In addition to Mr. Bustillo and Mr. Rodriguez, two active members of the military, Mariano Diaz Chavez and Atilio Edilson Duarte Meza (accused of being one of the hitmen) were also arrested.

During the 2016 arrests, Honduran authorities seized evidence from the homes of the accused, including computers, flash drives, cell phones and cameras, as well as cartridge shells and a Colt revolver. On the same day, police carried out a search of the DESA Corp. offices in Tegucigalpa, where they confiscated USBs, computers, tablets, and paper documentation.

The legal team representing the Cáceres family has officially requested to review the evidence in the possession of state prosecutors more than 35 times in the past two years. But despite four court orders to hand over the information, the public prosecutor’s office, under the direction of Attorney General Oscar Chinchilla, had refused before last week’s court order.

The majority of the evidence had not undergone any kind of analysis—and some of it had not even been extracted from cellular devices.

On Aug. 23, which was supposed to be the first day of the evidentiary hearing, Mr. Chinchilla’s office formally confirmed the worst: Despite having material related to the crime in its possession for more than two years, the majority of the evidence had not undergone any kind of analysis—and some of it had not even been extracted from cellular devices. “The negligent attitude of the public prosecutor’s office has been obvious,” Rodil Vasquez, one of the lawyers who represents Ms. Cáceres’s family, told America.

Instead of beginning the evidentiary hearing, the court spent two days reviewing all of the missing evidence. On the second day, government officials blocked the entrance to the court, affecting members of the legal team representing the family of Ms. Cáceres, as well as members of Copinh who had come to support them.

“They finally let us in from the street, where the military wasn’t allowing us by. Clearly this is an irregularity, an arbitrary attitude, really intimidating to those who are seeking justice in this case,” said Mr. Vasquez. Mr. Vasquez had requested that the public hearing be broadcast live, given international interest in the case, but the court rejected the request.

Eight men are facing trial for the murder of Ms. Cáceres and the attempted murder of her colleague Gustavo Castro, who was with Mr. Cáceres at the time. A ninth man, David Castillo, was the general manager of the DESA Corp. and was arrested as he attempted to leave Honduras on March 2, exactly two years after Ms. Cáceres’s murder. The evidence that the public prosecutor’s office is withholding is also important in the legal proceedings against Mr. Castillo and others that it might implicate.

The Berta Cáceres case, and its perhaps intentionally botched investigation, is shedding light on how human rights cases are investigated in Honduras—where, according to Amnesty International, “widespread impunity [has] continued to undermine public trust in the authorities and the justice system.” The case could also show how the Honduran government is approaching economic development projects that dramatically affect indigenous communities.

In an open letter dated Aug. 23, international and national human rights groups asked Mr. Chinchilla to fulfill his obligations as attorney general, objecting to “irregularities” in the case that could lead to its dismissal. Justice for Berta Cáceres has been, and will continue to be, a long-term struggle.