J.R.S. advisor on Syria crisis: A refugee is never one who wants to leave his home 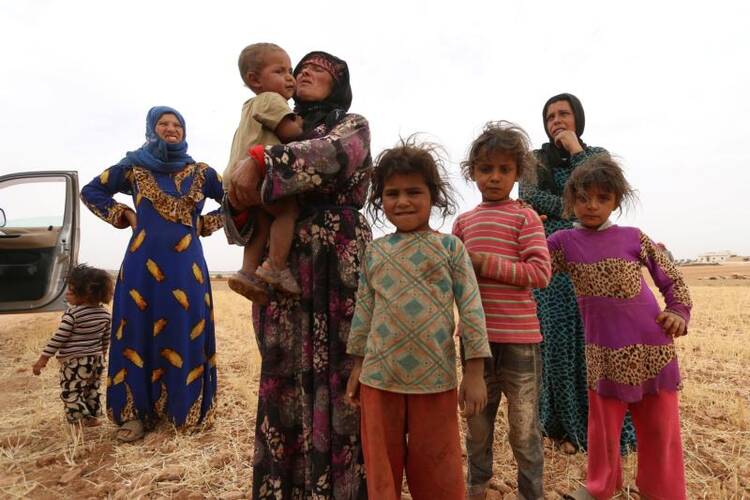 A displaced Syrian family who fled violence in Aleppo stands in a field in the rural area of Manbij in 2016. (CNS photo/Rodi Said, Reuters)

“The war in Syria has to stop, all kinds of violence has to stop there because so many ordinary people are suffering,” the Indian Jesuit Father Cedric Prakash told America in this interview as he prepared to leave Lebanon and return to India after spending three years working with the Jesuit Refugee Service (J.R.S.) in the Middle East and North Africa Region.

Father Prakash recognizes that the situation in Syria “is very, very complex” and “all is not black and white as a lot of the Western world would want the rest of the world to believe; there are lots of shades of gray,” he said. “There are no readymade solutions, no readymade answers.”

During his three years in the region, Father Prakash has visited Syria countless times and has come to understand that there are “many players” that have caused the deaths of an estimated 500,000 people, the internal displacement of some 6 million and the forcing of another 5 million to leave the country. Syria had a population of 22 million in 2010. Now more than half that number are dead or on the move.

Father Prakash recognized that Russia and Iran are among the players in this conflict that started in March 2011, but said he is “convinced” that there are “three big players in the Middle East and especially in Syria: the United States, Israel and Saudi Arabia.” He believes that “once the big three decide to stop the war, then this can happen.”

“They still call the shots more than anybody else in this war,” Father Prakash said, calling it “a proxy war” that is being fought “because of resources, and especially oil, even in Syria.”

Father Prakash is convinced that there are “three big players in the Middle East and especially in Syria: the United States, Israel and Saudi Arabia.”

Father Prakash, who is widely recognized for his work in the field of human rights and is the recipient of several international and national awards including the Legion d’ Honneur from the president of France, drew attention to the fact that the war in Syria is being fueled and prolonged by “the never ending flow of arms and ammunition to the various groups, including the ISIS or the rebels.”

“The same is true of the conflict in Yemen,” he said. Like many others Father Prakash expressed strong criticism of “the role of the military-industrial complex” and noted “the vast amounts of profits” that are being made from the sale of arms by such companies as Lockheed and Martin, as the Norwegian Peace Research Institute and the Stockholm International Peace Research Institute have documented.

“Why do the global players who speak about migrants and refugees not say we will stop giving arms and ammunition to these countries who are fomenting war, and who are providing these weapons to various groups, including terrorist organizations?” he asked. “Why should countries in the Middle East be spending and buying so much arms and ammunition? Can the Western nations stop producing arms and ammunition, and ever more sophisticated ones, and stop selling them to these violence-torn countries?”

For the past three years, Father Prakash, 67, has lived in Beirut, the capital of Lebanon. Lebanon is a country of 4 million people which today, according to the government, hosts an estimated 1 million Syrian refugees. The number is difficult to verify, Father Prakash said, as there are so many undocumented refugees in this land.

They studied 170 Syrian refugee families in Lebanon. The vast majority want to return home, even tomorrow.

He has headed a research project together with the Jesuit-run St. Joseph’s University in Beirut. They studied 170 Syrian refugee families in Lebanon. Their findings show, among other things, that “the vast majority” of Syrians want to return home, even tomorrow, but they have “genuine fears” regarding what they will find there.

The fears include: whether they can regain their homes, whether their children can gain access to education and whether they can have a dignified life ahead of them in Syria. They want the Syrian government, the United Nations and other actors to grant them a safe return and security once they get home. But they also fear they may have to remain in Lebanon indefinitely. A full report on the research will be published at the end of the November before Father Prakash returns to India.

Father Prakash is a priest from the Gujarat province of the Jesuits in northwest India. He came to Lebanon three years ago to serve as the regional advocacy and communications advisor for J.R.S. in Middle East and North Africa, which works with refugees and internally displaced persons in Syria, Jordan, Iraq, Turkey and Lebanon.

He told America that there are five Jesuits working with the refugees and displaced people in Syria today, together with 100-150 volunteers. He recalled that “J.R.S. began work in Syria in 2008 to help the Iraqis who came into Syria from the conflict in Iraq, and now we are helping the Syrians.” He said J.R.S. is also “working in Jordan with the Sudanese, the Somalis and the Eritreans,” and this is not easy work because of the political complexities among them.

“J.R.S. began work in Syria in 2008 to help the Iraqis who came into Syria from the conflict in Iraq, and now we are helping the Syrians.”

Before coming to Lebanon, Father Prakash had been active in social work in India. From 1987 to 2001 he was director of St. Xavier’s Social Service Society, which worked among the poor and marginalized in the slums of Ahmedabad and in rural Gujarat and where he began an initiative for communal harmony and peace. Father Prakash has also had links with institutions in the United States. Marquette University honored him as the Wade Chair Scholar (2009-2010), and he taught at the Summer Peacebuilding Institute of the Eastern Mennonite University in Virginia.

Father Prakash came to Rome earlier this month to give a retreat to the Salvatorian Sisters at their general congregation. When we met in a bar on Nov. 13, this prolific writer and poet reminded me that next day was the 38th anniversary of the founding of the J.R.S. He recalled that Father Pedro Arrupe, then superior general of the Society of Jesus, “had been deeply affected by the realities of the boat people from countries like Vietnam and Cambodia because of the ongoing war and persecutions then taking place, and in his process of discernment he was convinced that the Society had to respond to these refugees who were displaced.”

“On Nov.14, 1980, which also happened to be his birthday,” Father Prakash continued, Pedro Arrupe “launched worldwide the Jesuit Refugee Service—convinced that every single Jesuit had to respond, in whatever way he could, to the needs and plights of the refugees and displaced persons all over the world.” And right from that time, “Father Arrupe insisted, as has the J.R.S. since then, on the three interrelated instances in terms of accompaniment—being present in the presence of the suffering of these refugees who are displaced, trying to be of service to them in whatever way we can, trying to provide for their basic needs notwithstanding our many limitations, and thirdly to advocate for their rights.”

Father Prakash noted that “it is exactly the same thing, more than 30 years later, that Pope Francis has been echoing right from the start of his pontificate, ever since he went to visit the island of Lesbos in 2013, and in his theme for 2019, in the context of the Global Compacts for the refugees and the migrants which the United Nations are supposed to put into force.”

Pope Francis, he said, “is speaking about the world, the church and every single follower of Jesus who needs to welcome, needs to protect, needs to promote and to integrate the refugees and the displaced persons wherever they are. He is convinced that Jesus, Mary and Joseph being refugees would expect these things from any single disciple of the Lord.”

Father Prakash described his experience in the Middle East as “a great learning experience” in which he has “definitely grown” from his encounters with hundreds of refugees “who have sometimes bared their hearts and souls to me, who have walked hundreds of miles in search of survival, security.”

“I want to tell people in the West that a refugee is never one who wants to leave his home, who wants to leave his land,” he continued. “They are displaced, those who are refugees have no choice. They are not a threat, the genuine ones are not terrorists, they have not come to displace your culture and your religion and, if given a chance, they want to go back home; they love their homeland, they love Syria or Iraq and so on.”

Likewise, Father Prakash said, “many of the Christians who have been displaced from places like Mosul and so on also want to go back home,” but he acknowledged that “many too want to go to the West for better material gains, and the war has been a window of opportunity for them.”

As he prepared to return home before Christmas, Fr. Prakash told America that he is glad to have had this experience with J.R.S. in the Middle East, and to have been in the midst of refugees and displaced people in another culture and another context. He said he now better understands how global players work “and how difficult it is ‘to do advocacy’” in that part of the world. “It’s easier for me to take on [Prime Minister] Modi in India than to open my mouth in Lebanon,” he remarked with a smile.

Father Prakash hopes that the lessons he has learned in the Middle East will enable him to provide people in India with practical ideas on how to address realities of millions of people who are being displaced by the mega industries in his homeland. “We Jesuits are not addressing it sufficiently,” he said, “because we have not fully understood that displacement is not about people moving from one country to another only, but also from one state to another.”