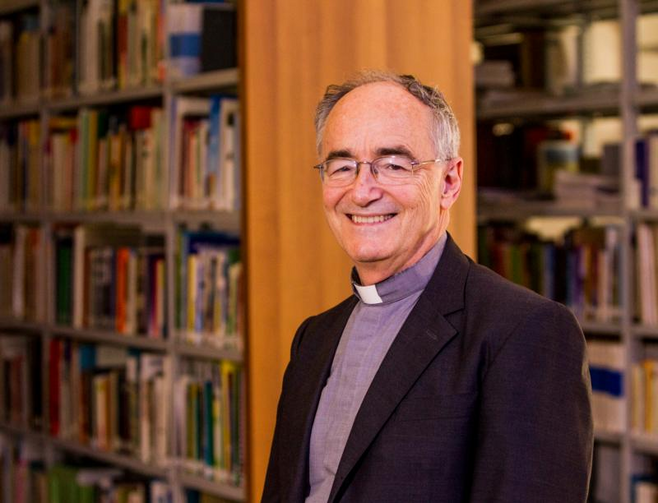 Jesuit Father Michael Czerny, undersecretary for migrants and refugees at the Vatican Dicastery for Promoting Integral Human Development, is pictured in an April 10 photo in Rome. (CNS photo/Robert Duncan)

VATICAN CITY (CNS) -- Like St. Oscar Romero, the six Jesuit priests and their two companions who were brutally murdered in the waning years of El Salvador's civil war gave witness to the Gospel and remained close to the poor until their deaths, a Vatican official said.

In a letter written to mark the 29th anniversary of the martyrdom of the Jesuit priests and their companions Nov. 16, Jesuit Father Michael Czerny, undersecretary of the Migrants and Refugee Section of the Vatican Dicastery for Promoting Integral Human Development, said St. Romero's death "impacted and inspired our fellow martyrs who we celebrate today."

The martyrs, who were murdered nine years after St. Romero was killed while celebrating Mass, were believed to have been targeted due to their outspoken calls for a cease-fire between government and rebel forces.

According to the 1993 report of the U.N. Truth Commission on El Salvador, the Jesuit-run Central American University, also known as UCA, was accused by government authorities of being "the center of operations" for the FMLN rebel group.

The martyrs, who were murdered nine years after St. Romero was killed while celebrating Mass, were believed to have been targeted due to their outspoken calls for a cease-fire between government and rebel forces.

The authorities also publicly stated "that the Jesuits were fully identified with subversive movements."

In his message to the Jesuit community of the UCA, Father Czerny recalled visiting the university on the 10th anniversary of St. Romero's death, not long after the murder of the Jesuit priests.

"After the assassination of our companions," he said, "I read a phrase on a poster that read: 'We want bishops like Archbishop Romero.' How alive and timely these words are for me today!"

Recalling Pope Francis' homily during the recent canonization of St. Romero, Father Czerny said the slain archbishop's closeness to the poor "with a heart magnetized by Jesus" was an example followed by the martyred Jesuits.

"Let us pray for the same 'magnetization' for Jesus and to be close to the poor," he said. "Let us not forget to pray for their intercession, for our Pope Francis, for the entire Society of Jesus and for the many Central Americans fleeing their countries to go north."

Giving voice to the voiceless is a challenging mission and a noble vocation.