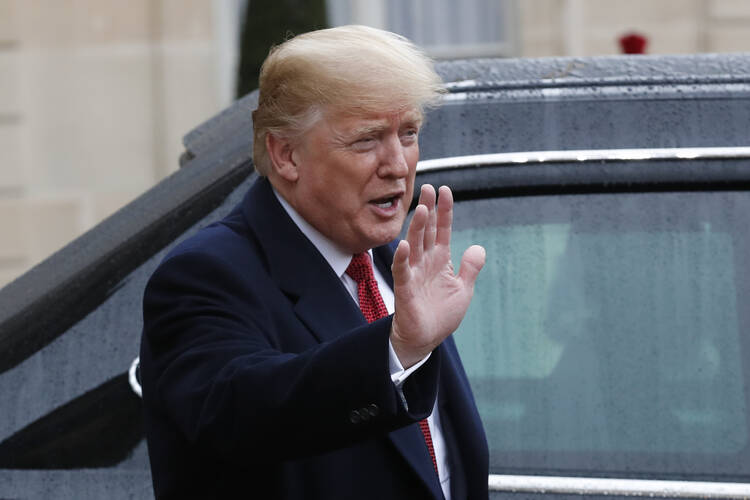 The presidency of Donald J. Trump has produced at least one boost to the prospects of American democracy: The turnout in this month’s midterm election, among both Democrats and Republicans, was at its highest since 1970, at least. The incessant barrage of political spectacles that the president excels in providing—an unfortunate result of what I called, earlier this year, a “cult of the presidency” that constantly demands our attention—is getting people to the polls. If this reality TV star has turned politics into his latest show, voting offers us the chance for a cameo, in the form of an opportunity to help squash the opposing team of fellow citizens.

I would like to think that more participation is a good thing, especially against widespread voter-suppression efforts. But I am worried about what we are participating in.

The Democratic conquest of the House of Representatives promises to heighten the drama. Now, rather than being relegated to the minority-party sideshow, Mr. Trump’s foils can escalate their #resistance. We are on the edges of our seats. Can Democrats topple him with subpoenas and inquiries? Will he make a deal with them to get his border wall? What insults are in store for Nancy Pelosi? Whatever happens, at least, we know this: It will be about him, him and him, and about us versus them.

I would like to think that more voter participation is a good thing. But I am worried about what we are participating in.

For some years now, I have been living in an alternate universe by writing a book on a radical political tradition that also happens to have essentially bipartisan support in this country: cooperative business. It finds champions from Paul Ryan and Mike Pence on the right to Bernie Sanders and Kirsten Gillibrand on the left. And yet, perhaps precisely because of that lurking consensus, this tradition does not get nearly the attention or prioritization it deserves. A good idea does not make for a good wedge.

This may be for the best. If pro-cooperative policies did get more attention, they would get swallowed into a wormhole. If someone on one side advocated them loudly, everyone on the other side would have to stand in relentless opposition. By being discreet, bills encouraging credit unions and employee ownership have passed with bipartisan support during recent months.

When the president and cable news notice them, issues are not issues anymore, just spectacles. These include some of the major decisions concerning the protection of life.

A significant majority of Americans agree about the reality of climate change and the need to take action, for instance—at least in the abstract. But politicians treat the planet as a black-and-white matter of partisanship, thanks to their respective party coalitions. Research suggests that Republicans would be quite supportive of proactive climate policies if they heard it from Republican politicians but not if they only hear it from Democrats. Meanwhile, we are losing the opportunity for meaningful collective action.

The young have had enough of the show. They cannot afford to tolerate political entertainment at their expense.

Tooth-and-nail battles over abortion have also prevented agreements that could reduce the number of deaths in the short term, such as pairing restrictions with better health care and workplace provisions for mothers. Grandstanding on one side produces a mirror on the other. Gone are the days of a Democratic Party aspiring to make abortion “rare,” much less permitting outright anti-abortion leaders like Jimmy Carter.

Health care, gun control, the social safety net, incarceration, immigration, L.G.B.T. rights—each of the questions that relate to protecting the dignity of life in this country are ruined by made-for-TV performances. Reasonable policies on virtually every divisive issue have been demonstrated in other countries to work better than in our system. Yet the chances of learning from such examples appears to be approximately nil. Meanwhile, politics descends ever further into poisonous race-baiting, the scapegoating of vulnerable people and the cynical manipulation of procedure.

The thing is, maybe we actually like victimizing each other and never addressing basic problems. Maybe it is part of American moxie, the urge to dominate the world that we have succeeded at so brilliantly over the past century—economically, militarily and culturally. In this view, compassion is an exercise in restraint, even mediocrity. It holds us back from ensuring that a small minority of us can become spectacularly powerful. Other countries might do better at serving their people, but we prefer hegemony.

The young have had enough of the show. They are electing women and people of color who cannot afford to tolerate political entertainment at their expense. This week, Rep.-elect Alexandria Ocasio-Cortezjoined hundreds of youth activists to demand action on climate change at the office of her presumptive Majority Leader, Rep. Nancy Pelosi. Those activists are making a spectacle of their own—not about any one person, not about which party wins or loses, but about having a future on habitable planet.

Theirs is a basic, almost boring demand. It is either win-win or lose-lose. And they will only succeed by showing that their cause is bigger than the egos of the party leaders, because unlike most of those in charge, they will have to live with the consequences. Of course, activism can become its own kind of reality TV. The test of the politics in the next two years, and always, is whether we can undermine the power-seekers and serve each other.

Democracy is not a cameo. It is a way of being a neighbor.

Nathan Schneider, a contributing writer for America, is a reporter and professor of media studies at the University of Colorado Boulder. His latest book is Everything for Everyone: The Radical Tradition That Is Shaping the Next Economy.

Who are obsessing over Trump? And just what are they specifically obsessing about?

Why do American conservatives of the Trump variety resort to abuse so quickly when they're challenged? Guilty conscience?

Really? Can you be more specific? I thought the article was difficult to understand too.

There's just something fascinating about an idiot with nuclear codes.

Stan -
Some unfinished business from a different midterm thread-
Here are some more sites you might find interesting:
https://www.wsj.com/articles/thirty-years-on-how-well-do-global-warming…
http://www.aei.org/publication/18-spectacularly-wrong-predictions-made-…
https://www.instituteforenergyresearch.org/climate-change/climate-alarm…
Well, maybe you won't find them interesting because you probably already knew everything they have written, and you know better than all these scientists (they must not be the hard working ones of whom you wrote).
Perhaps you can answer: 1- How does one discern what the climate should be? 2- Is change not the only constant on earth? 3 - How do you explain Long Island's existence?
Thanking you in advance.

The best evidence now says that managing climate change responsibly is the biggest collective challenge ever faced by humanity. I'd like to see way more leadership from the Church helping us to focus on this issue and its implications for our spiritual lives. How can we love God and our neighbour without husbanding God's creation, the earth?

The intention for these films to sway hearts, minds and voting intentions...how ever u can watch all this stuff at uktvnow