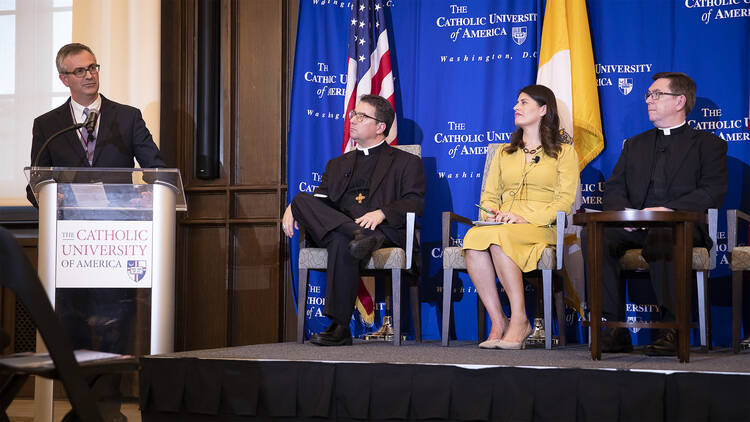 Thomas Burnford, president and CEO of the National Catholic Educational Association, discusses the state of Latinos and Catholic education in the United States Oct. 30 at The Catholic University of America in Washington. (CNS photo/Tyler Orsburn)

More than 60 percent of Catholics under 18 are Hispanic, according to Hosffman Ospino, an associate professor of Hispanic ministry and religious education at Boston College. Yet only 17 percent of students at Catholic schools are Latino.

How to address that disparity was a central focus of a national town hall on Latinos and Catholic Education, co-hosted by America Media and The Catholic University of America on Oct. 30.

"We are the past, present and future of the church. We are not another story; we are the story.”

“More than 43 percent of all Catholics [in the United States] are Hispanic,” Mr. Ospino said. “We are the past, present and future of the church. We are not another story; we are the story.”

The town hall, which was livestreamed, was part of an America initiative to foster meaningful conversations about the future sustainability and growth of the U.S. Catholic Church, with a particular emphasis on Hispanic Catholics. Coverage has focused on three key topic areas: immigration, criminal justice reform and Catholic education.

Catholic education “is for the common good, not just for the elite,” Bishop Cantú said, voicing his concern that Catholic education has become “a privilege for the privileged.” “Scholarship dollars are not the long-term solution, but we have to do it out of a sense of justice,” he said.

Bishop Cantú said that parents of Catholic school students “pay twice” because they pay their taxes and tuition. “Those are not state funds. They’re funds from our families. I think we need to remind our politicians about that. They should let people use their tax dollars how they want to,” he said.

“Where we’re headed is that Catholic schools will be for the elite and for the rich,” Bishop Cantú said, lamenting schools he has had to close “in the poorest parts of town.”

In addition to new funding models, Ms. Alonzo said Catholic education needs to explore different educational approaches as well, including bilingual schools. She described Catholic schools as “a path to heaven and to college.”

“If we truly want to evangelize, we have to invest in our future. What better way can we inform these citizens to vote in a way that supports our Catholic values?”

Catholic education also tends to suffer from a shortage of Latino teachers, Ms. Alonzo said. She argued for higher teacher salaries and encouraged educators to ask Latino students to consider the teaching profession.

“If we truly want to evangelize, we have to invest in our future,” she said, adding that Catholic education, faith formation and youth ministry should be three core areas of emphasis for the church. “What better way can we inform these citizens to vote in a way that supports our Catholic values?”

Monsignor Clay, who oversees formation for seminarians at Catholic University, has worked in Hispanic ministry for more than 20 years. When he was a pastor, his parishioners asked him to allow a statue of Our Lady of Guadalupe to be placed within the church.

Why Latino Catholics are key to the future of the church in the U.S.
Catholic News Service

The experience helped him realize that he had to spend time learning from the Latino community, he said. Monsignor Clay shares those lessons with the seminarians he oversees.

Mr. Burnford said the growing number of Latino students presents an opportunity for Catholic schools to flourish. He noted that 26 states had tax credit or school choice legislation and philanthropic support for Catholic schools is also on the rise. “But it is not about enrollment,” he said. “It is about handing on the faith to our children from generation to generation.”

More than 75 percent of Latino students are at underperforming public schools, Mr. Burnford said, a figure he called “horrific.” The church needs to address the problem by holding the government accountable, whether or not the students end up in Catholic schools, he said.

“Our faith is not some huge institutional endeavor,” Mr. Burnford said. “Our faith is relational. It is person to person. It starts with the name of Jesus Christ, but it filters through. Our church is ultimately about who we get to know.”

The next event related to the initiative is scheduled for Dec. 11 at the Mexican American Catholic College in San Antonio. Archbishop Gustavo García, Norma Pimentel, M.J., and Sean Carroll, S.J., will lead a conversation on immigration.

J.D. Long-García is a senior editor at America. He oversees an America initiative to foster meaningful conversations about the future sustainability and growth of the U.S. Catholic Church, with a particular emphasis on Hispanic Catholics.

The issue of language is very complex. I believe Spanish speaking teachers should be available primarily to speak to parents and to the few children who speak English poorly. My experience is most Latino children born in the US or brought here at a very early age speak English as their primary language because of their interaction with the English speaking community. However, because the parents often speak English poorly they don't understand what teachers who are speaking in English have to say about their children's progress during teacher/parent meetings.
A second issue is how Latinos view education. I have found that many Latinos do not put a high priority on education so many of their children drop out of hight school to take low paying jobs and those that graduate are not encouraged to go to college.

"Monsignor Clay, who oversees formation for seminarians at Catholic University, ..."--really? how's that working out for ya?

One can tell a great deal about an institution by the way it budgets and spends its resources. Bishop Cantu said, "where we're headed is that Catholic schools will be for the elite and for the rich." With too few exceptions, we are not headed there, we are already there. And my alma mater, where this town hall was held, may be a good example of the dilemma that confronts us. Where does CUA put its money? Where its mouth is? On the social teaching of the Catholic Church? How many Catholic universities have overflowing business schools, often funded by donors with little allegiance to Catholic social issues? How many Catholic schools endow enough resources to allow those Latino Catholics who cannot afford it to attend their schools? The article seems to suggest that we can vote our way to a solution by electing officials who support public aid to private schools. What about changing the way we prop up our present Catholic schools and making a clear and unequivocal statement about what is most important to us? We cannot do this if we continue to seek out Board members and donors whose agenda does not include a preferential option for those marginalized in our society. The change must come at the financial level, and we need to be much more creative about gathering our resources and about how we then spend them.