In Florida panhandle a local church steps up after Hurricane Michael

In Florida panhandle a local church steps up after Hurricane Michael 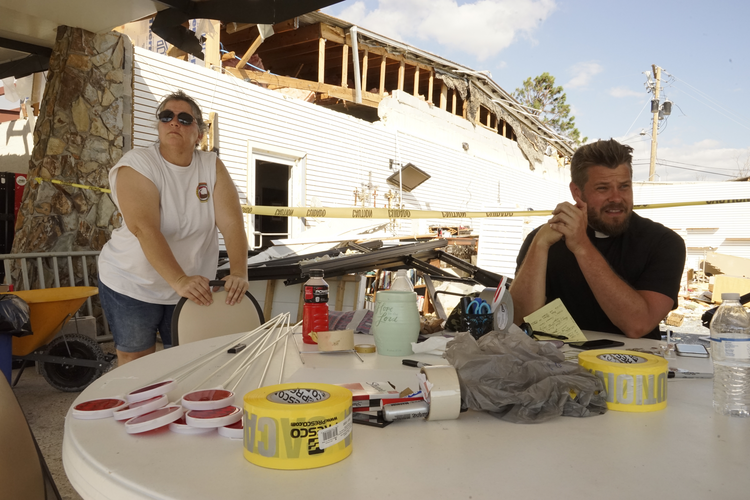 Amid the destruction that Hurricane Michael exacted upon Panama City when it stormed ashore on Oct. 10 stands St. Dominic Catholic Church. Its young pastor, Father Michael Nixon, has been at the helm of a well-organized post-Michael relief operation made up of parish volunteers distributing aid throughout this low-income community.

The church’s roof has been torn off by the storm, and its community center, once host to a soup kitchen and religious education and parish meeting rooms, lies in ruin as trucks roll in with donations of water, food and gas a few days after the storm. Families walk by or drive up to get in line for their first hot meal in days or to pick up some dry goods to take home.

“It’s been heartbreaking seeing people,” said Father Nixon. “Obviously, any storm is going to affect the poor in such a more profound and significant way.”

When Hurricane Michael tore through the Florida Panhandle last week, it left almost no structure unscathed. The storm’s pace, wind speed and ocean surge swept houses off their foundations in Mexico Beach and carried whole freight trains off tracks in Panama City.

“It’s been heartbreaking seeing people,” said the young pastor. “Obviously, any storm is going to affect the poor in such a more profound and significant way.”

Much like New Orleans’ Ninth Ward after Hurricane Katrina, the low-income neighborhoods east of Panama City, where St. Dominic is located, were especially hard-hit by the storm. Now residents here are desperate for help. They make daily trips out of their shelters under a blazing sun to search for assistance against a backdrop of collapsed gas stations and caved-in supermarkets.

Father Nixon’s observation about the effects of the storm on the poor in his care speaks to a new reality, one in which hurricanes, intensified by human-driven climate change, may disproportionately affect the poor and working poor. Many residents of Springfield, where the median household income hovers around $30,000 a year, did not have the means to evacuate before the storm hit.

Down the street from St. Dominic, a haggard looking Jesse Mitchell pushes a bicycle with a flat tire towards his home, dragging a suitcase with the few supplies he has managed to gather in tow. His family of six weathered the storm at home and in its aftermath were running low on provisions.

“Where would we evacuate to? We didn’t have the money to just up and leave like that,” he said. “There are a lot of us that aren’t as financially successful as others.”

One in five of Panama City’s residents live below the poverty line, but it is not just their economic situation that has left them desperate after Michael. The eye wall of the hurricane passed directly over low-income areas in nearby Springfield, Fla., that border waterways leading inland from East Bay.

“There are so many unknowns, as far as what can be rebuilt, how long it will take to be rebuilt, so many people that are already in precarious situations.”

Meteorologist Bryan Norcross of the local ABC affiliate WPLG said that this combination of land and water terrain increases the turbulence of winds within the storm, creating tornado-like conditions. “It’s wind-sheer spin—a spin up vortex” he said. “It’s crossing over all kinds of damage thresholds of what buildings can sustain, and you end up with corridors of damage.”

These damage corridors happen when structures upstream in the wind gusts collapse, thrusting debris into buildings downstream. Mr. Norcross explained that structures in the affected poor neighborhoods in Panama City might be especially vulnerable because of already shoddy construction.

Despite the destruction, Father Nixon is a charismatic and uplifting presence, but he is also worried about losing the people he calls pillars of his parish.

“There are so many unknowns, as far as what can be rebuilt, how long it will take to be rebuilt, so many people that are already in precarious situations,” he said.

Major employers in the area—Tyndall Air Force Base and Eastern Ship Building—were both planning expansions before the storm, “but obviously all that is affected by all this,”’ he said. Given the historical experience after Katrina, in which low-income communities of New Orleans were drastically changed because residents were forced to migrate to areas that could offer job opportunities, Father Nixon’s fears are not unfounded.

But over at the Bay County Emergency Operations Center, the focus of officials has yet to shift to the specific needs of vulnerable people in the eastern Panama City.

“When we move into recovery I think that’s going to be a really, really big issue, and that’s something that we kind of have to work together on,” Bay County Public Information Officer Katy Feeny said. The county is partnering with local non-profits to deliver aid to hard-hit areas, but without cell reception or internet, county officials are having trouble communicating essential information to residents.

In Springfield, Amy Bauer is growing desperate on the fourth day of the disaster. She has no money and little food. Her first interaction with any government official had come that morning, when National Guard troops passed by and left her left two military MREs, “meals ready-to-eat.”

Residents like Ms. Bauer who are fortunate enough to make their way to St. Dominic can find some spiritual comfort in blessings from Father Nixon and Father Luke Farabaugh. In the church’s parking lot, cases of water are stacked atop one another and the smell of barbeque provides a normalcy amid the surrounding chaos. In the immediate aftermath of a disaster, it is often civic and private forces like this church which step up while local government struggles to mobilize resources. But St. Dominic is more than a place to find supplies, it also offers a peaceful environment at a time when any sense of security has been stripped away.

What awaits Panama City and its hard-pressed residents remains to be seen. After Hurricane Katrina, the Ninth Ward was never fully restored. Without any specific hurricane preparedness or recovery plans in place for low-income communities, residents are left to wonder if 10 years from now, Springfield will ever be the same. In the meantime, folks here are doing what they can to assist friends and neighbors.

As the evening approaches people gather at St. Dominic for a daily open air Mass, while around them Panama City bustles with residents rushing to get home before curfew.

This article also appeared in print, under the headline “In Florida panhandle a local church steps up after Hurricane Michael,” in the November 12, 2018, issue. 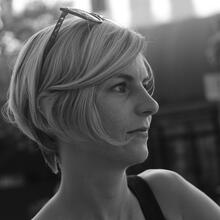 Atena Sherry is an independent journalist and poetry teacher based in Miami, Florida.