The Editors: Slashing refugee numbers is unethical and harms our country 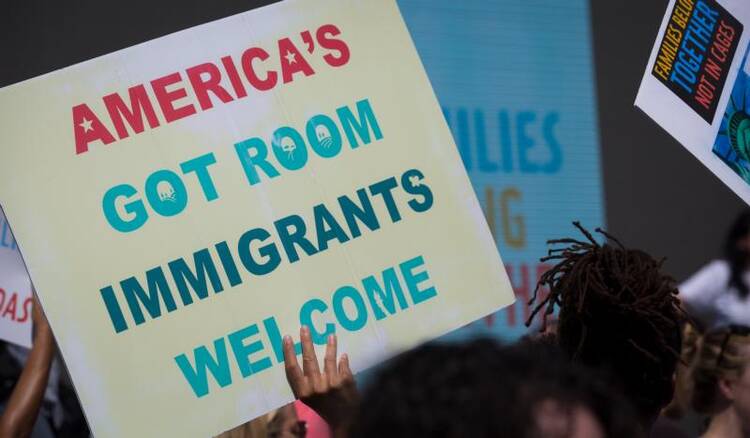 In the aftermath of World War II, hundreds of thousands of refugees from a continent ruined by war and facing massive population shifts as the victors redrew national boundaries sought entry to the United States. Our nation responded in 1948 with legislation allowing more than half a million refugees to seek a new life on our shores. They came from Europe.

Last week, U.S. Secretary of State Mike Pompeo announced the number of refugees allowed in the coming year will be 30,000, the lowest ceiling in almost four decades.

Faith leaders at the United Nations: we must change our approach to refugees
Brandon Sanchez

This is a stark reminder that our contemporary U.S. policy is completely at odds with our national rhetoric around resettlement—that we are a refuge for “your tired, your poor, your huddled masses yearning to breathe free.” The Trump administration’s antipathy toward refugees and immigrants is, of course, a matter of public record. President Trump promised a “Muslim ban” in his presidential campaign and argued that Syrian refugees could be a danger to the country. He has also decried immigrants from African nations, which he called “s***hole countries.” But this new ceiling still manages to shock and dismay. It is 15,000 lower than even in 2018, when the United States resettled the lowest number of refugees since the creation of the program.

It should go without saying that there is little justification for such a callous and indifferent response to refugees at the exact moment that the United States enjoys its strongest economy in a generation. Similarly, we cannot simply turn our backs on refugees from nations decimated by disastrous U.S. military interventions of the past several decades; we have a moral and ethical obligation to these populations. Despite President Trump’s rhetoric to the contrary, few of them have chosen to leave their homes. They were driven from them, and often by regimes we considered our allies.

A ceiling of 30,000 refugees for 2019 is not just an ethical catastrophe. It is bad public policy.

Even in the world of realpolitik, however, slashing refugee numbers makes little sense. A generous refugee resettlement policy has multiple benefits beyond its ethical necessity. It fosters good will and cooperation with poorer nations struggling to accommodate transient populations (and, in the process, decreases the chances they will be pulled into the orbits of Russia or China); it helps to stabilize nations that border on conflict zones and could be drawn into larger wars; and it allows the United States to reward the loyalty of populations who assist our foreign policy aims (for example, translators and guides in Afghanistan and Iraq who helped save U.S. soldiers’ lives). A generous resettlement policy also gives us credibility when it comes to leaning on other nations to harbor large populations of refugees.

It is also worth noting that a 2017 report from the Department of Health and Human Services estimated that between the years of 2005 and 2014, refugees had contributed more than $269 billion in federal, state and local taxes—far more than they received in government assistance.

A ceiling of 30,000 refugees for 2019 is not just an ethical catastrophe. It is bad public policy.

Muslim beliefs are antithetical to western ideas and they should be resettled in areas amenable to their beliefs. In case someone wants to claim religious bias, then I have no qualms with any other religion. For the best interests of these refugees find a country that is compatible with their beliefs.

Again I ask the editors to openly state what their recommended immigration policy is.