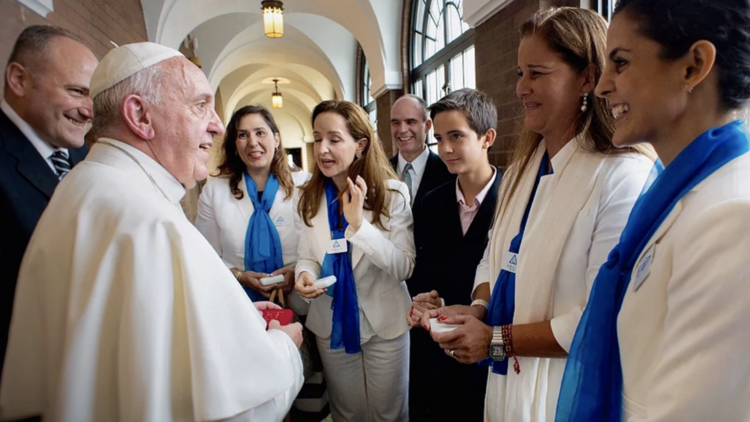 Members of the Association for Comprehensive Enhancement of the Family greet Pope Francis during the World Meeting of Families in Philadelphia in 2015.

Fifty years ago this week, Pope Paul VI convened the second general Conference of Latin American and Caribbean Bishops in Medellín, Colombia.Scholars have called Medellín an exemplification of the principles of the Second Vatican Council.

The Association for Comprehensive Enhancement of the Family is a good case study for how the Medellín conference has come to influence the life of the church in the United States. Inspired by Medellín, María del Carmen Moncayo de Villaseñor and María Luisa Arroyo de Ramírez founded the association in Mexico City in 1973.

Better known as A.M.S.I.F. for its Spanish-Language name, Asociación Mexicana para la Superación Integral de Familias, it is a five-year education and development program for women. In the United States, there are parish-based chapters in Texas, Arizona, California and New Jersey.

The Association for Comprehensive Enhancement of the Family is a good case study for how the Medellín conference has come to influence the life of the church in the United States.

Ms. Maldonado credited the Rev. Miguel Solorzano for being open to the Spanish-language program at St. Charles Borromeo. At the first session, 300 women showed up.

The Archdiocese of Galveston-Houston now has 26 chapters. Earlier this year, Cardinal Daniel DiNardo recognized 1,000 participants in the program, 150 of whom had completed the five-year course. They received certification as promoters of health and development, which they may use to work at parishes. The certificate is also recognized in Mexico.

“We’re not anything ‘Ivy League,’ but they do earn a diploma for Christ,” Ms. Maldonado said. The program builds on Medellín’s “see, judge, act” method, she said. “As adults, the women want to be in charge of their education. They want to comment, participate, they want to take control of what they learn.”

Participants eventually take leadership roles in their parish as well. The term “facilitator” as opposed to “teacher” illustrates the method that is focused on empowering. “It’s about accompaniment,” said Elena Agostini, another facilitator. “We give them direction, but we do not impose things. It’s democratic in that way. We listen to them.”

The majority of the 1,000 participants are Mexican immigrants and many are undocumented. Women are attracted to the program for various reasons, but usually it is not the catechetical aspect. Flyers are displayed at bakeries and markets. Announcements are made in the church bulletins or at the pulpit about beauty classes, floristry or Zumba.

“That’s the hook,” Ms. Agostini said. But participants have to wait until the last of three one-hour sessions for Zumba, Ms. Maldonado explains. If it was not that way, the women would not stick around for the family and evangelization sessions. That is crucial since many of the women, even those who attend Mass regularly, may be unfamiliar with basic teachings, including the Doctrine of the Trinity.

In addition to catechetical and family sessions, workshops also focus on skills that may help participants find jobs, like cooking and nutrition, beauty, decoration and jewelry.

“Our mission is that they become agents of change,” Ms. Maldonado said, “in their families, and then, in their communities. It’s something that takes time. What are your dreams? Your passions? Perhaps you’ve never considered how to make these real.”

“We are here to help women, keeping Christ at the center of what we do."

Parishioners, including psychologists, lawyers and doctors, volunteer for various roles. Some do not speak Spanish but help with childcare or offer English classes. The association even has sessions for women in detention centers.

“There is a lot of domestic violence in our community and a lot of addiction,” Ms. Maldonado said. “Some of the women never learned they are daughters of God. They did not recognize their own dignity.”

In A.M.S.I.F., she said, Latinas are in solidarity with each other, leaving aside social or legal status. “We are here to help women, keeping Christ at the center of what we do,” Ms. Maldonado said.

Women in A.M.S.I.F. agree among themselves to take on a variety of service projects as a community. Some will clean the church, for example, while others reach out to women who have unexpected pregnancies, pray rosaries for vocations or serve as eucharistic ministers.

How a city and church in Texas are rebuilding one year after Hurricane Harvey
J.D. Long-García

Immigration and the politicization of Mollie Tibbetts’s murder
J.D. Long-García

When Hurricane Harvey hit a year ago, the network of women reached out to the community, Ms. Agostini said. They reached out to members and others to identify what the needs of their neighbors. Each A.M.S.I.F. facilitator accompanied a family who suffered major losses through the hurricane.

“When we asked for donations, they gave them to us,” Ms. Maldonado said. The records they kept of families and needs facilitated the donation and delivery of two trailers full of new furniture and mattresses. The association in San Antonio helped get the donations.

“People who had the resources to do so went to hotels until their homes were rebuilt,” Ms. Maldonado said. “But those who couldn’t afford it ended up staying in gutted houses with nothing left but the wooden frame.”

Members of A.M.S.I.F. welcomed their sisters into their homes.

“In the moment of crisis, people brought out the best of themselves,” she said. “It was a moment of love, of accompaniment, a moment in which everyone was united.”

This is not easy for a beginner to know increase font windows 10 it is easy for not who has started using a very first day.