Sex abuse expert: Crisis is a call to a new vision of the priesthood 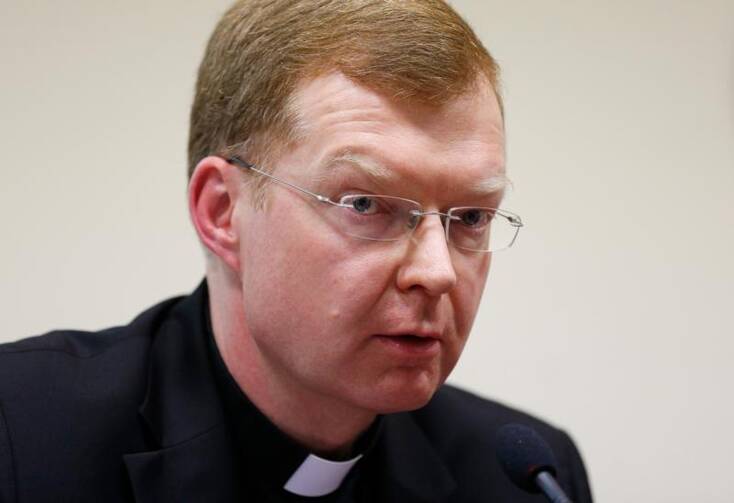 Jesuit Father Hans Zollner, a professor of psychology and president of the Center for Child Protection at the Pontifical Gregorian University in Rome, is pictured in a 2015 photo. Father Zollner has been on the frontlines of advocating for survivors of clerical sexual abuse and developing detailed programs to prevent abuse. He said the crisis unfolding again in the United States is a summons to a new way of envisioning the church and taking responsibility for it. (CNS photo/Paul Haring)

VATICAN CITY (CNS) -- A Jesuit priest who has been on the frontline of advocating for survivors of clerical sexual abuse and developing detailed programs to prevent abuse said the crisis unfolding, again, in the United States is a summons to a new way of envisioning the church and taking responsibility for it.

"I am not surprised" by the new reports of abuse, "I do not think it will stop soon and, at the same time, I think it is necessary and should be seen in the framework of evolving a more consistent practice of accountability," said Jesuit Father Hans Zollner, a professor of psychology and president of the Center for Child Protection at the Pontifical Gregorian University in Rome.

"I know that people are deeply angry and they are losing their trust -- this is understandable. That is normal, humanly speaking," he told Catholic News Service Aug. 7 as newspapers were filled with information and commentary about the case of retired Archbishop Theodore E. McCarrick, misconduct in a Nebraska seminary and the pending release of a Pennsylvania grand jury report on clergy sexual abuse.

The courage of survivors to speak out, the investigative work of both police and church bodies, the implementation of child protection measures and improved screening of potential seminarians, church workers and volunteers mean that children and vulnerable adults are safer today.

But, as Father Zollner has been saying for years, that does not mean accusations of past abuse will stop coming out, and it does not guarantee there will never again be a case of abuse or sexual misconduct.

Dealing with the reality of potential abuse and the history of clerical sexual abuse in the church is a process, he said. "We see that people were first speaking out about the misbehavior of priests and now it's bishops, so there is a development there. I am not surprised, and I do not think it will stop soon."

“I know that people are deeply angry and they are losing their trust—this is understandable.”

After Archbishop McCarrick resigned from the College of Cardinals and was ordered to live a life of prayer and penance pending a church trial, many U.S. bishops began speaking publicly of devising a process to review accusations made against bishops.

Father Zollner agreed that is a good idea, but he believes it must be part of "a new way of coming together as the people of God" and taking responsibility for the church.

To make that happen, he said, "we need to honestly look at what we can learn from the way society and companies function in terms of accountability, transparency and compliance."

“A church body investigating allegations needs to have as much independence as possible,” Father Zollner said.

But the response must go far beyond setting up another new structure, he said.

"Since God is the Lord of history, I understand all this as a call to a deeper understanding of what is the church about, what is priesthood about and what is the Christian life," he told CNS.

"From my point of view, the temptation can be to return to a very strict, closed-fortress idea of church, controlling everything," he said, but "that will not work anymore. We need a new model of accountability and responsibility and a new way of educating the whole people of God in Christian ideals."

The dominant understanding of priesthood and power -- described as clericalism -- is one key ingredient and was highlighted as a major contributing factor to abuse and a reluctance to report it in the December report of Australia's Royal Commission into Institutional Responses to Child Sexual Abuse.

In an essay published in January by Civilta Cattolica, the Jesuit journal, Father Zollner said, "Whoever in infancy or youth or as a candidate for priesthood learned that a priest is always blameless can easily develop the mindset that he does not need to justify himself to anyone. Anyone endowed with sacred powers can take anything he wants for himself. That kind of mentality can explain, at least in part, why some priests who have abused children or young people deny doing so or believe that they themselves were victims or merely accomplices ('he seduced me,' 'he liked it'), often making them blind to the suffering they have caused."

In addition to a renewed understanding of priesthood, Father Zollner told CNS, Catholics must reflect more fully on and articulate more clearly "what an integrated sexual life for married people, single people and clergy would look like. There is a lot to be done in that area."

Responding to comments that the clerical sexual abuse crisis is a result of the sexual revolution and the loss of sexual morals, Father Zollner urged caution and an objective study of the facts.

"The statistics from the Royal Commission report in Australia indicate that the abuse had its peak in Australia in the '50s and early '60s, which was way before the sexual revolution took place, so this goes against that argument," he said. Studies from the United States, Ireland and Germany also show that most abusers did their seminary training and were ordained before the sexual revolution.

"Among the clergy, the number of new allegations from the last 20 and especially the last 10 years has dropped almost to nil," he said.

At the same time, Father Zollner urged a renewed vigilance because of "the whole area of the internet and the availability of pornographic material and all kinds of sexual exploitation that are facilitated by that; it brings a new dimension to this and to society at large."

A process? Where did this guy Zollner come from? He needs to be put away or sent off to "reflect" with the indigent in Latin America for a few decades. Such a heady thinker. This is exactly what the church has lost its moral authority---no moral clarity. What a joke.

Not a NEW VISION, but return to a Church of Couples in leadership as existed as a natural existence since Creation and Gods command to Humanity to care for His creation, Nature, Lead His People, and be fruitful and multiply; plain and simple sex, in all it's forma, and that Union with nature and all of Creation.

This article is honest! My only huge
questions remain about churchman
like Pell of Australia - The Royal Commission was a joke.
My strong belief is that are thousands
more abused victims out there.
Thinking that the crisis is over
is totally wrong.
Highest respect for all priests who
did no harm.

The Australian Royal Commission was no joke--you're the joke.

This article is honest! My only huge
questions remain about churchman
like Pell of Australia - The Royal Commission was a joke.
My strong belief is that are thousands
more abused victims out there.
Thinking that the crisis is over
is totally wrong.
Highest respect for all priests who
did no harm.

"When dealing with accusations against a bishop, there should be at least a mixed board -- meaning some bishops and some independent lay persons."-- BUT we already have a mixed board--it is called the Papal Commission for the Protection Minors--the same do nothing board that Marie Collins resigned from in protest against it lack of support by the Pope and Vatican officials.
This guy Zollner is so far behind the curve he is laughable, yet Catholic News service seems to think he is the most quotable guy in Rome. He talks about "accountability" as if it was a new theological construct, just dscovered by all these highly educated churchmen. Every time somebody like Zollner starts talking I start singing "The Emperor has no clothes"!