In Britain, breaking up is hard to do 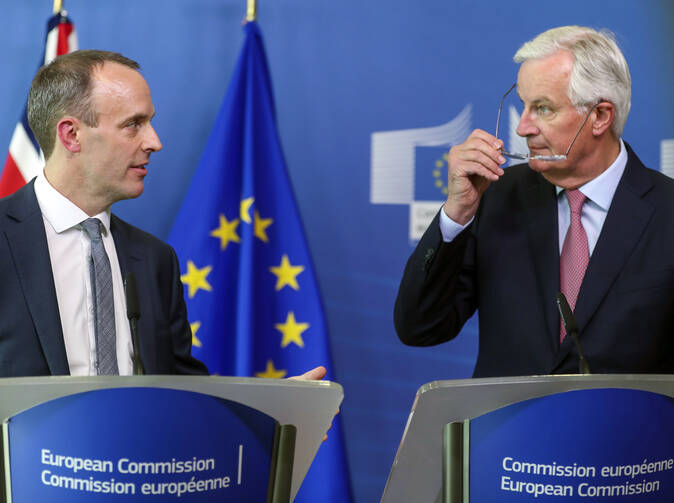 Listening to a powerful performance of Shostakovich’s “Leningrad” Symphony at the wonderful Proms summer music festival at London’s Royal Albert Hall made something click. This month’s Dispatch from London had been almost completed and then discarded seven times owing to the fast-moving unpredictability of public life just now in the United Kingdom and the daily disasters that comprise the Conservative government’s negotiations to depart the European Union.

Each day brings not only further confusion but also growing demands for a “people’s vote”: a second referendum on E.U. membership or at least a plebiscite on whatever exit deal, if any, this hapless government manages to negotiate. During the past few weeks, a resurgent demand for a second Scottish independence referendum has swelled, riding a wave of annoyance at a London “power grab,” and two more key ministers have departed from Westminster. Only the imminent parliamentary summer recess has emboldened your correspondent to try for an eighth time to file a complete Dispatch.

It was “Leningrad,” Shostakovich’s potent seventh symphony, expressing the power of art and of beauty against a dystopian landscape of lies, bigotry and smallness of vision, that reminded your correspondent of the importance always of lifting one’s gaze toward the horizon. The symphony was first performed, reportedly winning an hourlong standing ovation, in besieged and bombarded Leningrad (now St. Petersburg) on Aug. 9, 1942, the day that Hitler had predicted would be the city’s fall.

Each day brings not only further confusion but also growing demands for a “people’s vote”: a second referendum on E.U. membership.

Its first London concert performance had been at Proms in June of that year. The Russian composer refused to concede to the evil of Hitler’s fascism or Stalin’s despotism but persisted against these, as Ignatius of Loyola would have us respond to all evil and negativity. Things are bad, in other words, but we must not give in.

Everyone here is trying to sift through the wreckage of the Brexit bombsite. There is now a real possibility that the process could be abandoned altogether. If it is not, an increasingly likely outcome in March next year will be Britain’s approaching a political cliff-edge voted for by nobody. The United Kingdom would crash out of the European Union without any deal.

The second half of July brought admissions from Westminster that there are plans to deal with the fallout of a “no-deal” Brexit; government officials say they are just acting responsibly by preparing for that contingency, but few are fooled. The plans include the stockpiling of foods and medicines because what is presently imported from mainland Europe could run low within three days of a “hard Brexit,” since there would be no customs procedure to observe.

Such a no-deal scenario is now looking more likely than not. An exasperated Prime Minister Theresa May tried one final push for unity in her cabinet, summoning all its members to Chequers, the Buckinghamshire country pile used by prime ministers as their country residence since 1921. The aim was to crack heads together.

Leaks suggested that any minister who would not comply with the prime minister’s proposals would immediately lose their government car and driver and be handed both their coat and the card of the local taxi firm. That Fred’s Ace Taxis were not troubled throughout the weekend proved to be a false indicator of solidarity.

It has become obvious that, should there be no deal by March next year, all sorts of arrangements built up over decades will immediately become inoperative.

The “Chequers Plan,” which horrified the “hard Brexiteers” who will settle for nothing less than a complete break, was brandished in triumph at the populace through the media. But within hours, two major Tory figures, Boris Johnson and David Davies, had resigned in protest, and the policy shrivelled, as seared as the yellow-brown grasslands of this scorching summer.

The Tory administration admits that it is preparing with the police to respond to huge tailbacks (you might call them traffic jams) of trucks on the highways approaching Dover and the Channel Tunnel should customs arrangements grind to a halt. And Irish Prime Minister Leo Varadkar pointed out that U.K.-registered airliners could hardly expect to fly through Irish airspace on their routes, for example, to New York, if the post-Brexit Britain denies its fishing waters to his country’s boats. That provoked howls of affronted protest.

Air travel to everywhere else in Europe would similarly be grounded. It has become obvious that, should there be no deal by March next year, all sorts of arrangements built up over decades will immediately become inoperative.

Propelled by such worries, Scotland is moving toward a second independence referendum. Recent polling suggests that the pro-independence movement could win this time based both on the refusal to be dragged out of Europe against the nation’s will—just under 2/3 in Scotland voted to remain—and new evidence of political chicanery in the south. Public fury at a post-Brexit Westminster “power grab,” arrogating to London over 20 key powers repatriated from Brussels that most had presumed would go to Edinburgh, was well-marshalled by the Scottish Nationalist Party and its London M.P.s, leading to a sudden upsurge of thousands joining the party online.

A leading figure from 2014’s referendum was Murray Foote, at that time the editor of a tabloid which carried the infamous “Vow” from politicians who guaranteed all sorts of devolved powers if voters turned against independence. With a Brexit calamity looming, Mr. Foote has changed course, declaring now that independence is the way forward for Scotland.

Further possibilities in this bedlam of semi-fact-free panic include the possibility that the energy around the no-deal, crash-out scenario could also be a tactic, promoted by a government that knows very well how disastrous the whole enterprise will be but also thinks that a deal of some kind will finally be cobbled together. Mrs. May was, after all, a staunch Remainer.

Was your car cleaned by a slave? A new app in the U.K. tries to answer.
David Stewart

Not all Brits loved the royals or their wedding
David Stewart

Who knows? Maybe Britons are being fed these worst-case possibilities to get us to swallow a disastrous deal as comparably better than the catastrophe that a skillful government narrowly averted, despite the efforts of those nasty E.U. foreigners to do us in. Then we will hear, like those Leningraders, the violins.

Similarly, could it be that the Unionist parties might be secretly prepared to tolerate the Brexit mess in order to use it to scare undecided Scots away from their independence demands? So dear is the precious Union, with its chimeric notions of Empire and global influence, no matter how risible, that anything is possible.

That kind of weaponizing of a no-deal, cliff-edge outcome could prove effective with the British electorate. But if you wander around cliff edges, you have to be careful about what you are doing.

Given the monstrous progressive evil of the E.U., the liberal establishment will find a way to sabotage Brexit.

Father Stewart
The case you make appears to be that Great Britain has become a permanent hostage of the globalists of the EU. Yet when last I looked the EU gnomes of Brussels and Strasbourg are not accountable to anyone. .....the rather odd result being Great Britain is a hostage of a non democratic bureaucracy. Yet you are cheering that result.!

Pro-Brexit comments here are totally nd rigidly ideological. Het miss the point of the article, that there are dire practical consequences to a lack of a negotiated Brxit deal. Brexit yes, but without the idiocy of not solving the basic practical problems of Brexit. At this point in reality no one needs Brittain, but Britain needs Europe. Brexiters don't seem to get it, no one needs Britain. And Britain without practical arrangements with Europe wiil be deranged. Tory Brexit huffing and puffing is sheer vanity.

We have knowing of the way here google chrome download here when we want the chrome browser.

In that case you may take away the loan with the help of a guarantor. Your basic personal details in the application form are required so that you can be contact soon in order to reply you that your hummingbird loan application has approved and the money has directly transferred to your given bank account.