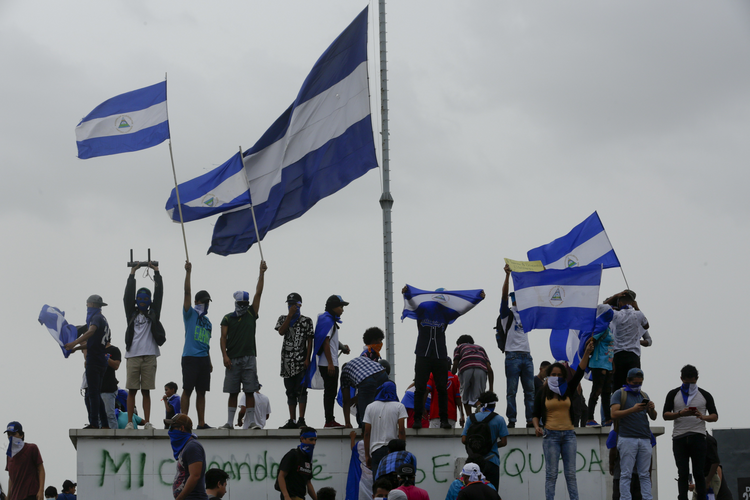 People fly Nicaraguan national flags during the commemoration of Student Day, demanding the ouster of President Daniel Ortega and the release of political prisoners, in Managua, Nicaragua, Monday, July 23, 2018. Anti-government protests began in mid-April over cuts to the social security system but broadened to include demands for Ortega to leave office and early elections to be held. (AP Photo/Arnulfo Franco)

MANAGUA, Nicaragua (AP) — Nicaragua President Daniel Ortega said he will not move up elections despite street protests that have seen more than 300 deaths in the past three months, but is open to continuing a dialogue mediated by the Roman Catholic Church.

In a recorded interview broadcast Monday by Fox News, Ortega denied that he controls paramilitary groups blamed for most of the killings. They are supported by his political opponents and foreign interests, he said.

That is counter to what international organizations and Nicaraguan human rights groups have documented. Last week, the Organization of American States adopted a resolution condemning human rights abuses committed by Nicaraguan police and armed pro-government civilians.

"We were elected by the voters," Ortega said. The next election is not scheduled until 2021. "And then we'll have to see who will be voted in for the new administration."

Ortega also denied responsibility for attacks on the Catholic Church, whose facilities and clergy have faced a number of aggressions in recent weeks.

Last week, in a speech on the anniversary of the Nicaraguan revolution, Ortega accused Catholic bishops of working with coup plotters, saying that disqualified them as mediators.

But in the interview, Ortega said, "We invite the Catholic Church to continue with the dialogue so the dialogue can grow and develop in an open manner." Nicaragua's bishops met Monday behind closed doors to discuss how to restart talks between the government and opposition.

Monday saw marches in Managua both against and in favor of the government.

It was the Day of the Student in Nicaragua, a remembrance for four students killed in Leon by the National Guard during a protest in 1959. Monday's peaceful student march ended in front of the locked gates of the private Universidad Centroamericana, one of several universities that have been closed since protests erupted in mid-April against since cancelled cuts to the country's pension system.

Angelica Mayorga, a shopkeeper, stood in front of the campus waving a Nicaraguan flag at passing traffic. In spite of the fact that in recent days Ortega's government retook control of the last student-held campus and snuffed out public displays of resistance in the city of Masaya, Mayorga said she and others will continue their public protest.

"We're going to continue forward until this student-killing dictator leaves," she said. "We want a free Nicaragua. We're not afraid."