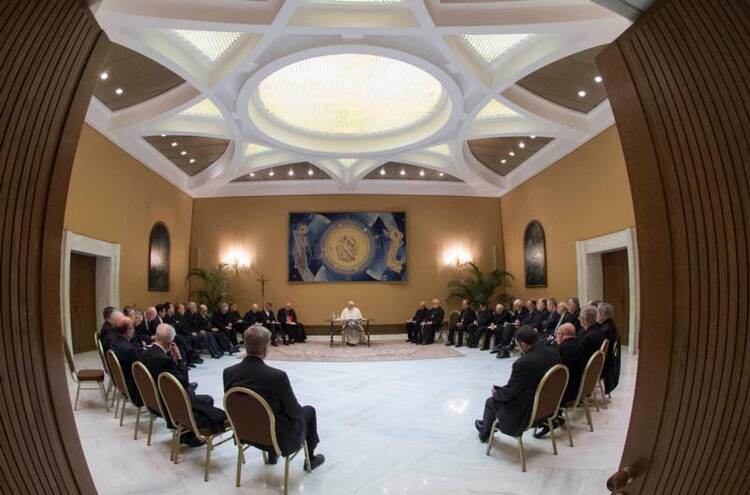 SANTIAGO, Chile (AP) — Chile has investigated 158 members of the country's Roman Catholic Church for committing or covering up sexual abuse against minors and adults, the national prosecutor's office said Monday.

The investigations include reports of abuse by bishops, clerics and lay workers filed since 2000. Some of the cases date as far back as 1960.

In all, the number of victims is 266. That includes 178 children and teenagers, and 31 adults. The age of victims was not established in 57 other cases.

From Chile, a story of priests in exile, trapped by guilt and sin
Raymond A. Schroth, S.J.

The nationwide figures follow an avalanche of sex abuse and cover-up cases that have recently embattled Chile's Catholic Church and prompted Pope Francis earlier this year to publicly denounce a "culture of abuse and cover-up."

The pope also said he was ashamed that neither he nor Chilean church leaders truly ever listened to victims as the country's abuse scandal spiraled.

"The temptation would be to focus on those investigated within the Church, but today we must first focus on the number of victims, which is what worries us," the Chilean church's Episcopal Conference said in a statement after the report was released.

In the past, prosecutors in Chile have had to drop charges against members of the clergy accused of sex abuse because the statute of limitations had expired.

But the national prosecutor's office said it wants to "rigorously investigate all sex abuse case cases committed by priests or people related to the Church" against children and adults, "regardless of whether the crimes have prescribed or not, because the victims have a right to be heard by the justice system."

The report said that out of the 158 people investigated in 144 separate investigations, 65 are bishops, priests or deacons who belong to a congregation; 74 do not belong to any congregation; 10 are lay persons in charge of pastoral parishes or linked to schools; and nine were undetermined.

Authorities said 36 of the 144 cases are currently being investigated, and 22 have been sent to another judicial office because the alleged crimes were committed before a judicial reform in 2000. Another 22 cases have resulted in convictions, while 64 cases have been either closed or temporarily suspended for various reasons.

Prosecutors said the vast majority of the sexual abuse crimes were committed by parish priests connected to an educational establishment. There are at least five cases where the heads of congregations or bishops in charge of a diocese are accused of cover-up or obstruction of an investigation.

In all, the number of victims is 266. That includes 178 children and teenagers, and 31 adults.

"The prosecutor's announcement is the latest sign that the impunity of the Catholic Church is ending in Chile. Increasingly, Chilean bishops and clergy are being treated simply as fellow citizens, subject to secular laws," said Anne Barrett Doyle, co-director of BishopAccountability.org, a U.S.-based group that compiles a database of clergy abuse.

"Today's report will encourage more Chilean victims to file complaints. Each complaint filed will lead to a safer church."

For decades, victims and their advocates have pointed to the hierarchy's culture of cover-up as the Vatican's main failure in dealing with the problem.

But Francis apparently came around to their view after meeting earlier this year with Chilean victims of the Rev. Fernando Karadima, the country's most notorious predator priest, and reading a 2,300-page report prepared for him by Vatican investigators, who also interviewed victims of Karadima and others in Chile.

if a secular, commercial company or corporation in Chile had been doing as much abuse as the Catholic Church, the government would have closed it down long ago. Is there a double standard here, where RCC is not compelled to adhere to the same standards of criminal justice as the rest of us? Chile sounds just like Ireland, where RCC was a monopoly corporation which thought that the laws of men did not apply to it. Time to disband the RCC corporation to protect the citizens. The onus is on the Church to prove why it should still be allowed to do business in Chile. Wonder if they have racketeering laws in Chile that they could invoke to put it out of business?