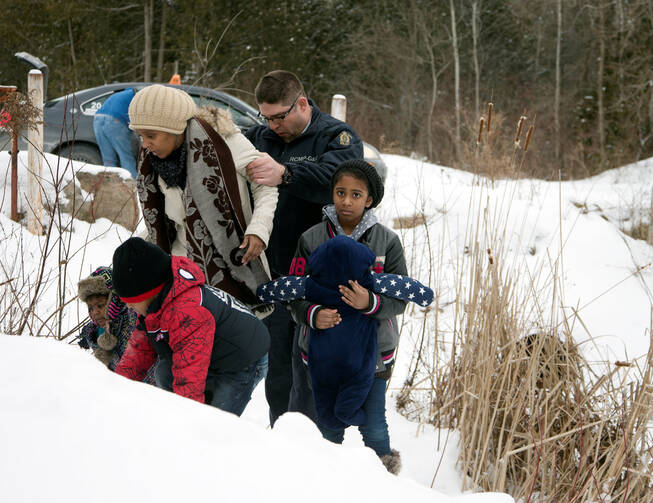 A woman who told police that she and her family were from Sudan is taken into custody by a Royal Canadian Mounted Police officer after arriving in February 2017 by taxi and walking across the U.S.-Canada border into Quebec. (CNS photo/Christinne Muschi, Reuters)

“What’s going on in the United States is wrong,” said Canada’s Prime Minister, Justin Trudeau, discussing the Trump administration’s short-lived policy of child separation at the border of the United States and Mexico on June 20. “I can’t imagine what the families living through this are enduring. Obviously, this is not the way we do things in Canada.”

Mr. Trudeau made the statement as pressure grew from the left-wing opposition New Democratic Party to denounce family separation. It also came after a brief spat between Mr. Trudeau and President Trump following the recent G7 meeting in Quebec.

Beyond the war of words, the countries have experienced an escalating trade dispute. On July 1, Canada placed tariffs on U.S.-made goods from mustard to motorboats in response to U.S. tariffs on steel and aluminum imports from Canada, suggesting the cautiously amicable relations between Canada and the United States since Mr. Trump took office may be changing.

Canada is not innocent when it comes to detention and immigration policies that have the potential to hurt individuals and divide families.

The two countries have different legal mechanisms for the treatment of migrants and refugees, but activists and academics who follow Canadian border practices say that, despite what Mr. Trudeau might think, things are not so obviously better in Canada after all. Though Canada has not separated children from their families at nearly the same rate or in the same way as its southern neighbor, migrant and refugee advocates say Canada is not innocent when it comes to detention and immigration policies that have the potential to hurt individuals and divide families.

“We do have cases of children being detained,” says Emily Gilbert, a geographer and director of the Canadian Studies program at the University of Toronto. While the policy of detaining children is a “last resort” according to the Immigration and Refugee Protection Act, children are sometimes placed into detention centers in order to keep families together instead of separating them through the foster care system. “It’s a Catch-22,” says Ms. Gilbert.

The Canada Border Services Agency can detain people crossing the border illegally if it considers them to be a risk to the public or a flight risk, but it can also detain people if the border officers cannot confirm their identities. Those detained can remain in custody indefinitely.

“There are limits for detention in the U.S. They don’t always adhere to them, but they are supposed to release the person into the community after an amount of time. We don’t have that provision in Canada,” says Ms. Gilbert. Instead, Canada’s provision for indefinite detention means that some apprehended by border officers can be held for years without resolution, like Ebrahim Toure. He is from West Africa and The Toronto Star reports he has been detained for five years in a maximum-security prison because he lacks the paperwork to prove citizenship in his home country of Guinea, which will not take him back.

Unlike in the United States, people detained by Canadian Border Services Agency can remain in custody indefinitely.

Legislation passed under the previous federal government, led by the Conservative Party’s Stephen Harper, imposed mandatory one-year detention for “irregular arrivals,” including 16- and 17-year-old migrants. People detained under those circumstances are ineligible for applying for permanent residency in Canada for five years.

A recent report from the Global Detention Center criticized Canada for its lack of transparency regarding immigration detention conditions and noted Canada is “one of only a handful of countries with a mandatory detention policy.” According to the report, 371 children were detained with their parents or guardians over the last two years by Canada Border Services Agency in conditions that resemble medium-security prisons. (Other children were separated from their detained parents and placed in foster care.)

Because of the volume of people detained by Border Services, which often exceeds the capacity of Canada’s three dedicated detainment centers in Toronto, Montreal and Vancouver, some detainees are sent to jails. “It creates a weird situation,” says Ms. Gilbert, “where people [detained for immigration purposes] have fewer rights than prisoners detained there.”

Whether children remain with their families in detention or are fostered out, both experiences can have lasting psychological effects on the children and their families. A 2016 report from the International Human Rights Program at the University of Toronto found that some children in Canadian detention facilities have been put in solitary confinement, and families who are detained in the same facility are sometimes not permitted to be together.

“I have personally observed families detained in the same detention center, but separated, absurdly, into three groups (women, girls and infants; male teenagers; adult males), with only one daily hour of common family time,” wrote François Crépeau, a law professor at McGill University, in a foreword to the report.

Ms. Gilbert says that while many of the habits and legal issues surrounding immigration in Canada have been around for a long time, two events, the North American Free Trade Agreement and 9/11, were especially significant in altering practices.

“There’s been a constant push to keep the [U.S./Canada] border open to trade, goods and services, and capital, but [to make] it harder for some kinds of people to cross. That tension between open and closed borders, for whom and with what effects, is constantly changing,” says Ms. Gilbert, in light of recent tariffs and economic protectionism, “but there are continuities.”

Though Canada’s immigration policies leave plenty of room for criticism, Ms. Gilbert says they pale in comparison to the headlines that have emerged this summer from the United States, noting reports on conditions at the Casa Padre facility in Brownsville, Tex., where 1,500 boys have been detained in a converted Walmart.

At the same time, Ms. Gilbert worries about policies in Canada that are not only hurting refugees and migrants but could be expanded under different federal leadership if the balance of power changes in Canada.

Ms. Gilbert hopes, however, that the media attention surrounding the Trump administration’s migrant policy is prompting Canadians “to question the kinds of systems we’ve allowed to have put in place.”

And she tries to remain optimistic. There is “always part of me,” she says, “as much as I study things that make me depressed and pessimistic, [that] says there’s always potential for change.”

there is this constant drumbeat in the media--"immigrants all good, receiving countries all bad"--and this article follows this same well trodden path. There is never any discussion of the responsibilities of the migrant parents towards their migrant children. Look at the caption photo of the mother taking a taxi to the border then crossing with her children--everybody looks well dressed and well fed. Where is the hardship? Similar photos can be found in Europe of well fed, well dressed "refugees" who are economic migrants looking to upgrade their quality of life rather than escaping hardship.
No wonder Americans and Canadians are skeptical of many of the claims made on behalf of illegal migrants by their bleeding heart supporters. How about some more balanced reporting that looks at the responsibilites of these migrants parents as well as their alleged rights? Like that mother who could pay to take a taxi to the border--maybe she could also afford to put her children up in a hotel?

Isn't a parent who drags their small child across dangerous territories a bad parent? Shouldn't such a parent have their children removed from them because they are an unfit parent? Shouldn't people who encourage such behavior be identified as enablers of this reckless behavior and be censored?

Isn't family separation the Christian solution and those who suggest otherwise un-Christian?.

There is no reason to separate families while confirming their identities; separating families makes the situation more dangerous, not less.

How dare they send children separated at the border to far off states where they are claimed by foster parents! If it were not for the public outcry at Trump's crack down on the border, it would still be going on. These NGO 's ; private foster care agencies, in cahoots with the US government, are outright stealing other people's children!