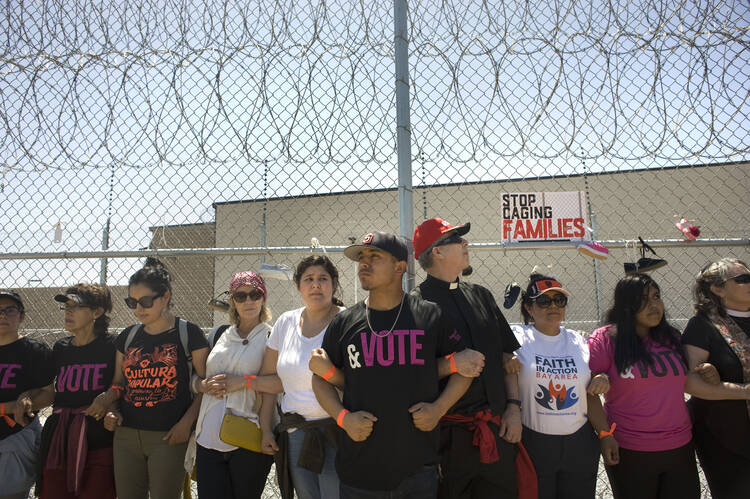 Demonstrators line up alongside a fence inside the Otay Mesa Detention Center in San Diego on June 23 during a rally in support of immigrant families who had been separated at the U.S.-Mexico border. (CNS photo/David Maung)

Pope Francis made yet another passionate appeal to “nations that enjoy great prosperity” not to close their hearts and doors to the migrants and refugees “who continue to knock at the door.”

“Before the challenges of contemporary movements of migration, the only reasonable response is one of solidarity and mercy,” Pope Francis said as he celebrated Mass in St. Peter’s Basilica on July 6 for migrants and refugees. The celebration marked the anniversary of his historic visit to the southern Italian island of Lampedusa.

Five years ago, on July 8, 2013, Pope Francis went to Lampedusa to remember the thousands who had drowned in the Mediterranean Sea as they tried to reach the shores of Italy or Greece from North Africa. Speaking on that occasion, he had denounced “the globalization of indifference.”

In his homily at Mass, Pope Francis did not mince words. “How many of the poor are trampled on in our day! How many of the poor are being brought to ruin! All are the victims of that culture of waste that has been denounced time and time again,” he said. “Among them, I cannot fail to include the migrants and refugees who continue to knock at the door of nations that enjoy greater prosperity.”

“Before the challenges of contemporary movements of migration, the only reasonable response is one of solidarity and mercy.”

Pope Francis denounced “a temptation powerfully present in our own day” in the face of migration that “takes the form of closing our hearts to those who have the right, just as we do, to security and dignified living conditions. It builds walls, real or virtual, rather than bridges.”

Francis, the son of migrants to Argentina from Italy, is deeply concerned at the growing tendency to close national borders to the millions of desperate people fleeing from war and poverty in the Middle East, Africa and countries in Central and South America in what has been described as the greatest humanitarian crisis since World War II. According to the latest U.N. figures, global displacement is at a record high, with the number of internally displaced at over 40 million and the number of refugees at more than 25 million.

During his homily, Pope Francis emphasized that “the only reasonable response” to the challenge of global migration “is one of solidarity and mercy,” a response that is “less concerned with calculations than with the need for an equitable distribution of responsibilities, an honest and sincere assessment of the alternatives and a prudent management” of the humanitarian crisis.

Aware that governments in many countries, including Italy, are enforcing ever-more restrictive policies towards migrants, Pope Francis said, “A just policy is one at the service of the person, of every person involved; a policy that provides for solutions that can ensure security, respect for the rights and dignity of all; a policy concerned for the good of one’s own country, while taking into account that of others in an ever more interconnected world. It is to this world that the young look.”

In St. Peter’s Basilica today, the pope recalled that in his homily at Lampedusa, “I repeated that timeless appeal to human responsibility: ‘Where is your brother? His blood cries out to me,’ says the Lord.

Pope Francis denounced “a temptation powerfully present in our own day” in the face of migration that “takes the form of closing our hearts to ... builds walls, real or virtual, rather than bridges.”

The contemporary response to this appeal, he added, “even if at times generous, has not been enough, and we continue to grieve thousands of deaths.” According to the office of the U.N. High Commissioner on Refugees, since January more than 1,000 people have died in the Mediterranean Sea as they tried to reach the shores of Europe.

Pope Francis’ words took on special meaning for the 200 migrants and refugees who were present at Mass, having survived the hazardous journey by boat, and for the many others present, including sailors and NGO workers who had rescued or otherwise helped them. Many had witnessed their fellow migrants and even family members drown at sea. At the end of Mass, Francis greeted each one of them individually.

A group of rescuers from “Proactiva Open Arms,” a Spanish NGO, had come from their base in Barcelona for the Mass, together with migrants they had rescued in the Mediterranean Sea. Speaking in Spanish, Francis thanked the rescuers “for embodying in our day the parable of the Good Samaritan, who stopped to save the life of the poor man beaten by bandits. He didn’t ask where he was from, his reasons for travelling or his documents… he simply decided to care for him and save his life.”

Then turning to “those rescued,” he said, “I am well-aware of the tragic circumstances that you are fleeing” and called on them to “keep being witnesses of hope in a world increasingly concerned about the present, with little vision for the future and averse to sharing.”

He urged them to show “respect for the culture and laws of the country that receives you” so that they may be able to work out together with those who rescued them “the path of integration.”

The Gospel today contained Jesus’ invitation: “Come to me, all who labor and are heavy laden, and I will give you rest.”

In his commentary, Pope Francis said, “The Lord promises refreshment and freedom to all the oppressed of our world, but he needs us to fulfil his promise. He needs our eyes to see the needs of our brothers and sisters. He needs our hands to offer them help. He needs our voice to protest the injustices committed thanks to the silence, often complicit, of so many.”

He concluded in Italian by asking the Holy Spirit “to enlighten our minds and to stir our hearts to overcome all fear and anxiety, and to make us docile instruments of the Father’s merciful love, ready to offer our lives for our brothers and sisters, as the Lord Jesus did for each of us.”

The Pope should focus on what causes prosperity and that this prosperity is the result of a culture change that took place in England and Holland 250 years ago. He should also emphasize the fact that this prosperity has been shared and reduced the number of poor in the world tremendously. While the improvement have been incredible, complete change can not happen in one fell swoop but requires major changes in the culture of the countries of those who live in poverty.

Are there any migrants living within Vatican City? Or in the hotel in which Francis lives? Serious question. Bridges not walls is poetry that saves this Pope from a very difficult area that needs research, data and solutions where they already live so that they don’t move. Over here Latinos are moving sometimes into ghetto neighborhoods that are more dangerous than some parts of Central America. The Church is doing poetry instead of research. Two Popes prior did the same shortcut on the death penalty...no deterrence research....they switched reality to deterrence as meaning deterring only the one murderer you caught. Read ccc 2267....that is exactly what it is doing. Papacy using shortcuts whether of poetry...bridges not walls....or changing the meaning of words....deterring only the one murderer you caught....both are signs of a soundbite modality to the new Church. These short cuts are saving Popes..plural...from doing real research....which is a lot harder than their shortcuts. Meanwhile UN figures give northern Latin America, non death penalty, as the most dangerous region on earth.