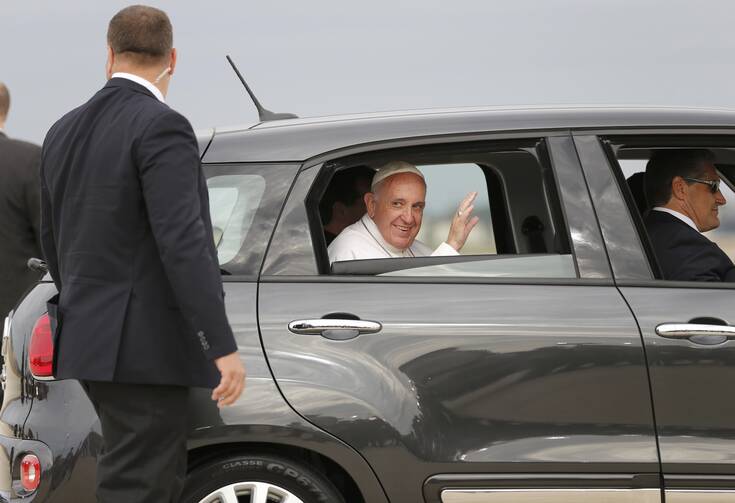 Pope Francis waves as he rides away in a Fiat after a short arrival ceremony on the airfield at Joint Base Andrews outside Washington Sept. 22, 2015. (CNS photo/Jonathan Ernst, Reuters)

If Silicon Valley’s unofficial motto is “move fast/break things,” we might say the Catholic Church’s approach is closer to “move slow/love people.” With such divergent cultures, it is not surprising that Rome and Silicon Valley do not talk much. But the coming of autonomous vehicles is an opportunity for the church to find its voice regarding a new generation of technology.

These vehicles bring together some of today’s most dramatic technology phenomena: artificial intelligence, automation and connectivity. Handling the transportation revolution proactively—leading with a moral framework rather than playing defense—could provide a blueprint for engaging with further technological change. If we apply Catholic social teaching to autonomous vehicles, certain lessons emerge.

The protection of human life is paramount in Catholic teaching, and it is the greatest argument for autonomous driving technology.

First, the protection of human life is paramount in that teaching, and it is the greatest argument for autonomous driving technology. Yes, one fatality this year involved a fully autonomous vehicle, but an estimated 94 percent of the annual 1.25 million traffic deaths worldwide—with 40,000 in the United States alone—are caused by human error. The development of autonomous vehicles is a moral imperative, as it offers the only viable path to the near-complete elimination of traffic fatalities.

For now, answers about how safe is “safe enough” for autonomous vehicles to operate on public roads are elusive—particularly after the killing of a pedestrian in Arizona in March by a self-driving Uber car. But one principle is clear: A vehicle’s software should be designed not to favor the lives only of its passengers but to protect all human life. This is a principle clearly relevant to A.V. design, but it has implications for all vehicles. The millions of S.U.V.s and other large vehicles on the road today, for example, are designed to protect their own passengers, but they put the lives of others at greater risk.

A second question relates to our stewardship of the earth. Fleets of shared, electric-powered autonomous cars are among the best hopes we have for reducing greenhouse gas emissions. Electric vehicles account for a tiny percentage of cars now in use, but the economics make their use compelling for the operators of A.V. fleets.

Low-income people in the United States are disproportionately likely to be without a car, which greatly diminishes their opportunities in life.

The problem is that it is not clear how driverless cars will affect our travel habits. Without the cost of a driver, autonomous vehicles will bring the pleasures of a chauffeured ride to the masses, and this may lead to more cars on the road for longer periods. This could limit or outweigh the environmental benefits from increased use of electric vehicles.

Third, Catholic social teaching reminds us of the dignity of work. Efficient technology allows humans to flourish, but it can also bring painful transitions for industries and communities. One in every nine American adults currently makes a living operating a motor vehicle. With those jobs in danger, it is morally incumbent upon employers and policymakers to improve retraining efforts, which have a spotty track record. The displaced could also be employed in long-overdue efforts to repair our nation’s infrastructure. And we must consider ways to strengthen the social safety net for those who lose jobs as a result of automation.

Finally, we must consider the preferential option for the poor, who are often the first to bear the costs of new technologies and the last to share in their benefits. In this case, however, the status quo is already hard on the poor. Low-income people in the United States are disproportionately likely to be without a car, which greatly diminishes their opportunities in life, and poor communities have especially high rates of pedestrian deaths in traffic accidents. Those who do own cars pay about 50 percent more each year in transportation expenses, on average, than those who do not. That could all change with autonomous fleets, which reduce the per-mile cost of transportation while allowing for point-to-point transportation without the burden of car ownership. But that will only happen if companies and policymakers ensure that fleets are deployed in low-income communities.

If the church is engaged in a meaningful way, we will be better able to realize the potential benefits of autonomous vehicles for the poor and for the environment—and to mitigate the costs of worker displacement. Perhaps one start would be an autonomous popemobile? That feels right. Pope Francis has the gifts to harness a cultural clash and make it an occasion for witness. And that is just what Silicon Valley needs. 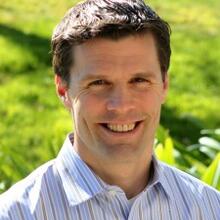 Brian Brennan directs the Emerging Technology Policy Initiative of the Silicon Valley Leadership Group Foundation. The views expressed here are his own and not necessarily those of the foundation.

First, the accident in Arizona might have been the result of pedestrian malfeasance. Second, electric cars use electricity generated by fossil fuels . Finally, keep away from a preferential option for the poor and Catholic Social Teaching. Both invariably hurt the poor.

As the grid becomes more dependent on renewables, so do electric cars. Electric motors are around 80% efficient. Internal combustion engines maybe 30% at best. Electric motors last like Waring blenders. Batteries can be used for other purposes when they can no longer charge past 80% peak capacity and eventually recycled. Car batteries can be hooked up to the grid for storage. Of course, it would be better if we didn't need cars. Cars are an artificial need. Rearrangement of living spaces could accomplish that.

Cars are not an artificial need. Transportation has always been a human endeavor. Anyone here up for a summer road trip?

Of course they're artificial. . For decades, people could travel thousands of miles on vacations and business without owning a car. It's still possible in Europe. Enjoy the traffic backups and encounters with jerk drivers on your road trip.

If you travel in Europe by high speed rail between major cities and on route then public transportation may be viable. Otherwise, if timely travel is desired maybe not nearly so much. Air travel, due to required security, is slow and cattle-car oriented and not very pleasant. For a quick jaunt between various locations, the automobile is still best. In the future they'll be powered by electricity and maybe shared vehicles. I really don't experience jerk drivers any more than jerk fliers. Guess it depends on your expectations. A road trip can be fun unless you're certain it won't be then it never will be. Is freedom of choice really so terribly bad??

Catholic social teaching has the answer for everything doesn't it? And it's not even Christ based, either. As stated by the advisor to Pope Francis, Cardinal Marx, “Without him ( Karl Marx), there would not be any Catholic social doctrine.” And people wonder why the Magesterium is and must be questioned and opposed. It no longer is even about Christ. (And Jesus weeps again.) The Church CAN be reclaimed from the demagogues in power but it will take time. As Francis proclaims, "See, judge, act." Call the Bishops and tell them when you disagree with them. They won't like it but the burden of arrogance does weigh heavily upon at least some of them.