More people in Hong Kong are thinking of leaving. Why?

More people in Hong Kong are thinking of leaving. Why? 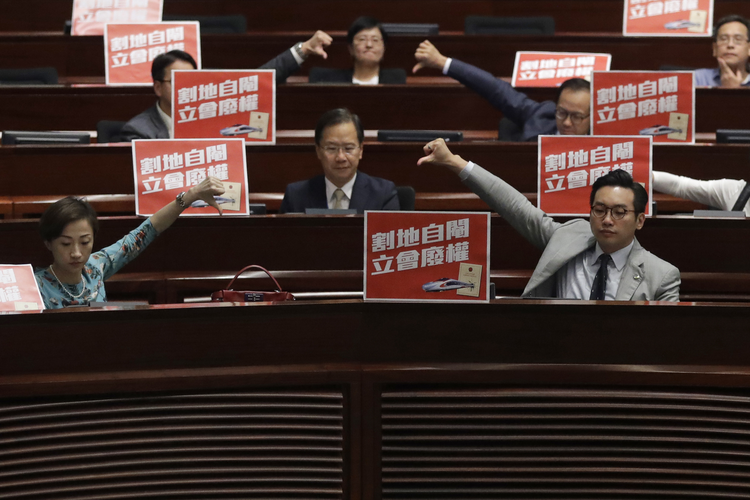 Pro-democracy lawmakers in Hong Kong react to the Legislative Council’s passage on June 14 of a bill giving China jurisdiction over a train station connecting the territory to the mainland’s high-speed rail network. (AP Photo/Kin Cheung)

This year, my children have said farewell to five friends moving abroad with their parents. “Mom, why do they have to leave?” my puzzled children asked.

I am at a loss for words in my efforts to explain why their friends’ families chose to emigrate. They are far from the only ones. When parents bump into each other in Hong Kong these days, what often comes up in conversation is not whether they have plans to move, but when they will do so.

Many are put off by the academic pressure on children here. In the pursuit of good schools, coaching in English, Mandarin and math is common even for children as young as kindergarten age. Hong Kong's oppressive education system, which subjects children to their first public examination at the age of 8, is often cited as a major factor in high-school and college students taking their own lives.

With a political landscape increasingly dictated by the mainland Chinese government, many Hong Kongers are overcome by a sense of helplessness.

Between 2010 and 2014, there have been an average of 23 student suicides a year, according to the University of Hong Kong’s Center for Suicide Research and Prevention. In 2016, 35 students committed suicide, including an 11-year-old child.

“Education here is all about marks. It’s not about learning,” said Julia Yuen, 46, a mother of three who will move her family to the United States this summer.

But there are more profound reasons to move. With a political landscape increasingly dictated by the mainland Chinese government, many Hong Kongers are overcome by a sense of helplessness.

There is the looming enactment of a “subversion law” pushed by Beijing that would drastically curb freedom of speech; the city’s chief executive (including the incumbent Carrie Lam) is not elected by ordinary voters but by an election committee accountable to Beijing; and a legislature dominated by pro-Beijing figures appears likely to pass highly unpopular bills in the future. A recent spate of prosecutions against young political activists also raises fears of the demise of the rule of law here.

Even those who care little about politics find it hard to cope in Hong Kong. Resentment toward the mainland has been stoked by the increasing numbers of mainland Chinese settling in Hong Kong, the government’s push of “patriotic education” and its promotion of Mandarin rather than Cantonese (the native tongue of 90 percent of Hong Kong residents) in schools and the ubiquity of mainland tourists who flock to Hong Kong for holidays or to buy infant formula. Then there are the property prices, boosted by an influx of Chinese capital. In January, the U.S. consulting firm Demographia named Hong Kong the world’s least affordable major city, with the median house price at 19.4 times the median income.

According to a survey conducted last fall by the Chinese University of Hong Kong, 33 percent of Hong Kong adults would emigrate if given the chance, and almost 5 percent of the respondents had already made plans to move. Those who wanted to leave were disproportionately young and well educated; 49 percent of those with college degrees expressed the desire to emigrate.

According to a survey conducted last fall by the Chinese University of Hong Kong, 33 percent of Hong Kong adults would emigrate if given the chance.

Official statistics suggest that the number of Hong Kongers who managed to emigrate last year was around 6,500 people, the lowest level in 12 years, but experts say that is due to tightened immigration policies in many countries. Margaret Chau, of the Hong Kong-based Goldmax Immigration Consulting Co., said her company receives around 3,000 inquiries per year, double the amount in 2014 and 2015—when political tensions between Hong Kong and Beijing escalated because of the civil disobedience movement Occupy Central.

The last sustained rush to emigrate occurred in the 1980s and the early ’90s, when many fretted over Hong Kong’s impending return to Chinese rule in 1997. In 1990 alone, the year after the Tiananmen Square Massacre in Beijing, some 62,000 Hong Kongers, or about 1 percent of the population, moved out. Many Hong Kongers now in their 30s to 50s left for the United States, Canada and Australia with their parents during that period, but they returned when China’s economy took off and Hong Kong's way of life appeared to have remained unchanged after the 1997 handover from Britain to Beijing. The desire to emigrate started anew after the Occupy Central campaign failed to pressure the Chinese government into guaranteeing free elections in Hong Kong, as promised in the basic agreement made before the handover of the territory. The campaign was sparked by Beijing’s announcement in August 2014 that all candidates for chief executive, Hong Kong’s highest office, had to be approved by China.

Since then, pro-democracy voices have been clipped. A Hong Kong court last year removed four pro-democracy lawmakers from office for modifying their oaths of allegiance to China during a swearing-in ceremony in late 2016. This means the pro-democracy camp has lost its veto power in the Legislative Council. As one consequence, in June the council passed a law giving China jurisdiction over a Hong Kong train station connecting the territory to the mainland’s high-speed rail network—marking the first instance of China being able to enforce its own laws on Hong Kong soil.

Ms. Yuen said she thinks the council is now likely to pass anything requested by Beijing. “It’s all staged,” she said. “They say they’re representing us, but that’s not true.”

Citing major infrastructure projects such the $11 billion link to China’s high-speed rail network and a bridge linking Hong Kong, Macau and the southern Chinese city of Zhuhai, Ms. Yuen said, “These are all white elephant projects at China’s behest.”

Wong Yan-kit, an IT professional in his 40s, agrees, saying the infrastructure projects benefit few of the Hong Kong taxpayers who will foot the bill and are part of a grand plan to absorb the territory. “It’s a small step in the eradication of the very concept of Hong Kong.”

Beijing is also pushing a plan to develop a “Greater Bay Area” aimed at more economic integration with Macau and the mainland. The unpopular former chief executive of Hong Kong, Leung Chun-ying, has called on Hong Kongers to embrace the “Bay Area people” identity, while critics warn that the plan would reduce Hong Kong to just another southern Chinese city.

“If I can save up enough, I will take my little boy and leave too,” Mr. Wong said. “The education is suffocating, our speech freedom is going down the tube, and we’re scared of saying anything wrong. Who wants their children to put up with this?”

Thank you Verna for this 100% accurate article.

Socialism is wonderful so they say. Yet it always leads to oppression because it is against the natural law. We are built to want freedom.

But we have many here touting its wonders.

How is China socialist? It is actually fascist, an alliance of government and corporate power. That country was built up to its present threat level thanks to unpatriotic whore capitalists like the Walton family. It was aided and abetted by the politicians of both parties and their advocacy of anything goes neoliberalism. The mass murder of Tienanmen Square slowed them down not a bit. The one-child policy and attendant coerced abortions? Not a problem. At least, in this country, no one forced pregnant women to get shop vac'd. I saw a longstanding American manufacturer send their best man to set up a world class factory in China. Then they sold the factory. Screw them.

I suspect many will move to the US where they will face less competition in commerce, the academy, and even the arts. America has become a complacent nation of entitlement, arich environment for the industrious and ambitious!